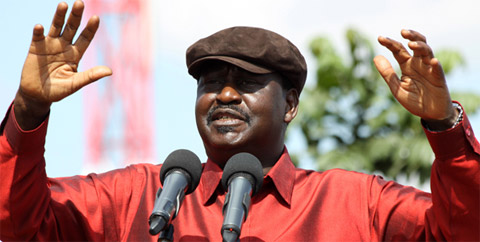 After the rigged 2013 election results were upheld by the Mutunga led Supreme Court, myopic and intellectually challenged pundits wrote off Raila, Kalonzo and Wetangula as leaders whose political stars would dim in the post 2013 political dispensation.

Time has vindicated those of us with faith in Railaâ€™s staying power. Those of us who continue to believe in the leadership of the trio who have not only embarrassed their opponents, but have also rebounded as evidenced by recent opinion polls published by Ipsos Synovate.

But just how did Jakom and his CORD apex trio manage to rebound and rejuvenate CORD and its grassrootsâ€™ structures so quick?

The answer is that he didnâ€™t have to re-invent anything, and the status quo remains that he is the most popular Kenyan leader as he has been over the last decade, and his star will continue to shine brighter towards 2017. The finding confirms that even with his weath + state resources Uhuru hasnâ€™t been able to turn the tables and improve his tanking ratings even as he controls the state machinery.

This happens as Raila continues to sit atop and steer the most popular and nationally diverse political machine that Kenya has ever known much different from Jubilee which continues to be a 2-tribe affair despite all the carrots that they have attempted to dangle.With no rock bottom in sight, just how far will Uhuru sink deeper into the bottomless abyss of unpopularity?

But even in the light of all this soaring popularity and bright outlook, Jakom continues to retreat into his humility, and even though the time is ripe, hasnâ€™t found it worthy to brag or start declaring his interest in another stab at it in 2017 like some politicians would have done under similar circumstances of unmatched popularity.

CORDâ€™s victory in Bungoma with an overwhelming 70% of the vote at the last count is very much in sync with IPSOS Synovate declaration that two thirds or 70% of Kenyans would support his presidency in 2013.

One wonders why Jubileeâ€™s Amani busybodies wasted their TNA funded billions in Bungoma- a race that all pundits had predicted that Jubilee didnâ€™t stand a chance against a CORD principal. Thanks to this misadvised grandstanding thwarted any iota of Mudavadiâ€™s hope of post-humus resurrection from political death were thwarted by Wetangulaâ€™s landslide victory. RIP UDF. In 2014, unless he swears allegiance to CORD, ODM and Raila, I expect Mudavadi to sink deeper into political oblivion.

Testament to Railaâ€™s growing popularity, Pollster IPSOS was at pains as to what language to use in publishing their recent findings without embarrassing the President and losing their business. Their finding was that â€œtwo thirds of Kenyans prefer Raila as Presidentâ€.

They went around this by paraphrasing this finding to read â€œprefer Raila to stay in politicsâ€. This was driven by business considerations because TNA was the biggest source of polling business to the Margaret Ireri led IPSOS in 2013. Otherwise the question they asked was â€œwho do you prefer for President if elections were held today?â€ To their consternation the verdict was an overwhelming landslide 66% supporting a Raila presidency.

That is why in 2014, I expect Octopus, the bogus Nakuru based fake pollster- the only one that put Uhuru in double digit lead in 2013 to make a comeback, as Jubilee intensifies its dismissal of the more credible polling results by IPSOS Synovate which will continue to demonstrate Railaâ€™s growing popularity as Uhuruâ€™s ratings continue to tank in a free fall without a rock bottom in sight. This writer expects Uhuru and TNA to become more isolated to its DP/Gema strongholds.

Railaâ€™s resurgence in polls as published by IPSOS is coming at a time when Jubilee is in disarray. Meru MPs led by his ardent defenders in the run up to 2013, Mithika Linturi and Mbiuki are up in arms over Uhuruâ€™s recycling of old guards in Parastatal appointments. They also complain of Jubilee appointments that seem to be skewed in favor of the Imentis of which Kiraitu, Muthaura belong to have for long been the â€œRoyal subtribeâ€ of the Ameru people of Mt. Kenya region. Under Jubileeâ€™s watch, Miraa business has also collapsed.

Luhya MPs allied to Amani and who would otherwise caucus with Jubilee recently complained of their region being sidelined in government appointments during the homecoming celebrations of Bumula MP Wilberforce Otsyula. Ruto loyalist Alfred Keter is up in arms over dishonored pre-election MoU.

The media which has recently been on the receiving end of Jubileeâ€™s digital tyranny has sought solace in the courts. Reason? Jubilee in its inferiority complex would rather steam roll its agenda and kill jobs than engage in an adult conversation with the business community. But more importantly is that here is a person who is also an investor in the same media industry, who wants to like a Mugumo tree in a glass lawn, be the only player standing in the media industry after the death of all grass around it. (As I will make clear in an upcoming article, Matu Wamaeâ€™s placement at the helm of KCC is also in line with that strategy to stifle and kill the Brooksideâ€™s main competitor in the Dairy sector, KCC).

News and recent opinion poll that Kenyans are a desolate and suffering lot under Jubilee watch is too bitter a pill to swallow. And for that they are willing to bring down the media through instillation of fear via the dreaded Kenya Information and Communications Act 2013 which effectively laid the infrastructure to intimidate the media to surrender to Uhuru.

And that explains why in 2014, I expect the media to reassert its authority in the face of an Uhuru crackdown. Moreso, I am convinced that the reason Uhuru wants to silence the media is because he has intelligence info that they did a parallel tallying in 2013, and as such they know the true results of 2013 whose publication would immensely dissipate any pending and false legitimacy that this government may have.

And Jubilee knows that itâ€™s just a matter of time before a â€œjicho pevuâ€ like expose detailing the true breakdown and behind the scenes maneuvers of the 2013 electoral outcome. The only reason the media held onto that expose is because they were afraid of being blamed for fomenting post election violence in 2013. And PNU/Jubilee knew that 2013 was actually the best time to rig, because the chances of a revolt was almost nil, at a time when Bensouda was breathing fire down the necks of Kenyaâ€™s political and media elite.

Take it from me Uhuru would be a one term president.