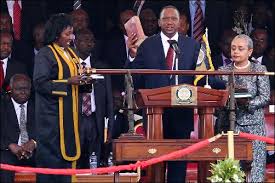 Ms Shollei at the inauguration of Uhuru Kenyatta as the 4th President of the republic of Kenya.

DR SEEMA SHAH via the Star.

After observing the Supreme Courtâ€™s scrutiny of election results from the polling stations and the constituencies, I was surprised that the report presented to the judges barely scratched the surface of what we found.

On the first day of the pre-trial conference, before the hearings even began, the Supreme Court judges ordered judiciary staff to conduct a scrutiny of Forms 34 and Forms 36.

The court also ordered a re-tallying of 22 contested polling stations, alleged to have had serious problems. The order was a welcome one, as it affirmed hope in the independence of the court and seemed to indicate the judgesâ€™ commitment to fully understanding the myriad problems alleged by petitioners.

Soon after the process began, however, it became clear that it was fraught with problems. Security during the scrutiny was severely lacking. Judiciary employees, as well as agents for the petitioners and respondents, were initially divided into eight stations.

Each group was tasked with scrutinising all submitted Forms 34, which consisted of manually entering all the numerical data from Form 34 into a spreadsheet. All data from the eight scrutiny stations would then be transferred onto one central computer using flash drives.

It is unclear when these flash drives were issued and what the protocols were to secure them overnight. There was also little security around the central computer, which was intermittently surrounded by one group of people or another.

After these issues were brought to the attention of the judicial staff, armed guards were brought in. While that helped secure the room overnight, it did little to secure the main computer receiving all the data.

Omitted from the report

Our observation notes covering just one day of scrutiny showed 64 missing forms 34 from 14 different constituencies. The report to the judges, on the other hand, showed that Forms 34 from only 10 constituencies could not be found.

Notably, our notes show several instances in which the number of votes cast exceeded the number of registered voters. Those were not the only omissions.

On many forms, the numbers did not add up. For instance, the number of votes cast, as recorded, was not always the sum of valid and rejected votes. There were also differences between the aggregate number of valid votes as written out in numerals and in words. Which result was announced, the one in words or the one in numerals?

We also noted multiple copies of the same form, some of which contained identical figures and others of which included non-identical figures. Some forms were missing results for certain candidates, including instances where all candidates were not listed, or were listed with no corresponding result.

Often, figures were missing from the documents, and the numbers were illegible or had been changed without an authorising counter-signature. How did the judges end up receiving a partial report of the scrutiny?

The methodology for scrutinising the Form 36 â€“ the document used to collate results at the constituency level — was also flawed and failed to show important discrepancies.

Our analysis showed that in some cases, the numbers for a particular polling station, as recorded on Form 36, were different from what was recorded on the corresponding Form 34.

There was no way to identify the problematic polling stations without using a polling-station level scrutiny of Form 36. Moreover, the methodology failed capture problems like missing polling stations on Form 36.

Based on our observation, the judiciary review also failed to highlight important differences between Forms 34 and Forms 36. It did not show, for instance, that in Isiolo North, the total number of votes calculated for Uhuru Kenyatta from all Forms 34 was 17,675.

Such discrepancies can be found for almost all the candidatesâ€™ results.It is also worth noting that it was impossible to fully observe the scrutiny process, because each station simultaneously reviewed multiple constituencies.

This meant that observers had to somehow keep an eye on all the different constituencies at the same time. Since there were only 10 observers from each side, it is not hard to see how being able to keep up with all the forms was difficult.

Also, each station was equipped with a large screen, which was meant to enhance transparency by showing the data being entered by judicial staff. Since more than one constituency was being entered at each station, though, not all data entry was transmitted to the screen.

Turnout beyond 100 per cent

It is now clear that the judiciary staff never carried out a re-tallying of the 22 contested polling stations as ordered. Instead, they simply reviewed and entered the data from the contested stationsâ€™ Forms 34 and Forms 36 into its spreadsheet.

In this way, then, it was no different from the general scrutiny of the forms. Inexplicably, its report on these stations highlighted only five as problematic. This was surprising, given that a simple calculation using the recorded figures showed four important anomalies.

First, in 16 polling stations, voter turnout as calculated using Form 34 and the principal register exceeded 100 per cent. The largest recorded turnout in this category was 301 per cent.

Second, in 18 polling stations, voter turnout as calculated using Form 36 and the principal register exceeded 100 per cent. The largest recorded turnout in this category was 450 per cent.

Third, and even more striking, was that there were two polling stations with voter turnout in excess of 100 per cent when using the green book, which the IEBC argued was the actual, complete register. One polling station in this category showed a 238 per cent turnout.

Lastly, it is only in one polling station that the sum of registered voters in the principal register and the special register equaled the number recorded in the green book.

Since the Respondents explained that the principal and special registers (as well as 12 trainees) together totaled the green book, the observed discrepancies are highly problematic and clearly undermine the Respondentsâ€™ claim. It will be interesting to see how the Supreme Court judges explain this when they release their judgment in less than 10 daysâ€™ time.