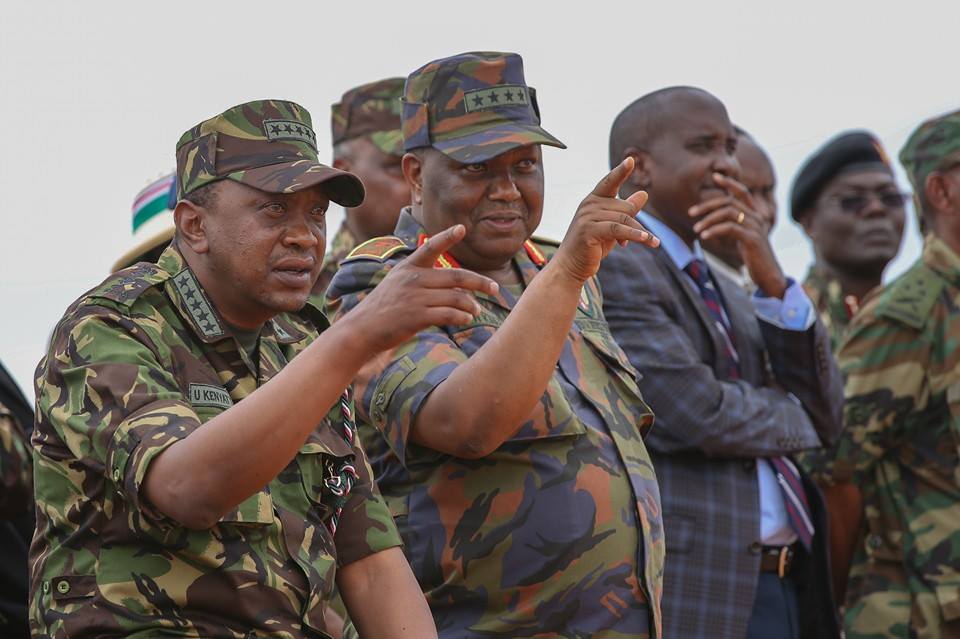 By Ian Ramas for The Nairobi Law Monthly

A lot of things have changed in Kenya since Jubilee rode to power about 19 months ago; plenty, in fact. But the most unusual â€“ and perhaps epochal â€“ is the advent of the politico-military power-man. Major General Julius Waweru Karangi is flexing his military muscle in the political arena.

Indeed, head of the Kenya Defense Forces (KDF), dispatches soldiers to volatile spots within Kenyaâ€™s borders even without the requisite constitutional consent of Parliament. He has had a hand in the raft of public (political) appointments by the Jubilee government â€“ including new assignments in Intelligence and Immigration departments.

He doesnâ€™t appear to be concerned about this state of affairs which, according to legal experts, flies in the face of Article 239(5) of the Constitution, which provides thus; â€œthe national security organs are subordinate to civilian authorityâ€. If anything, President Uhuru Kenyatta is his closest chum â€“ he often sees Uhuru off at the airport, parades all security officials and introduces them to the Head of State.

He is the man of the moment. Age forced the retirement of his heir apparent, Major General Joff Otieno of the Kenya Airforce. But Karangi, six years older than Joff, is walking strong, and, as will be seen later in this article, he may be around for a long while â€“ Jubilee apparatchiks are already envisaging a better deal for the four-star general.

Indeed, although Karangiâ€™s growing influence is on everybodyâ€™s lip, any public debate about the power he wields is mute. Unquestionably, he presided over the delicate transition of power from Mwai Kibaki to Uhuru last year. But behind closed doors, Karangi is said to have played a landmark part in thrusting Jubilee to power â€“ much to the disgust of ODM.

Indeed, days to the elections the Orange Democratic Movement (ODM) claimed Kenyaâ€™s top soldier was the axis of an elaborate covert rigging command that, the party claimed, drew also Michael Gichangi (NIS director at the time) and Francis Kimemia (Office of the President, head of the Public Service).

The 64-year old Karangi is not just any other senior soldier. He is pure bred, top dog martial man who has resolutely scaled the rungs of this profession since his admission into the barracks almost 40 years ago. A dispatch from the Ministry of Defence (see side bar story) says he â€œtrained in Kenya, United Kingdom (UK), India and United Statesâ€. He was in charge of the management of the American Military Aid to Kenya, chief of the Research Department in the Defence Headquarters, commander of an Air Defence Battalion in Kenya Air Force, liaison officer in Sarajevo (Bosnia) and in Belgrade (Serbia) as well, and senior military observer in Croatia all with the UN peacekeeper, among other international engagements.The catalogue of his local/domestic engagements and appointments is endless.

Today, Karangi is the key player in the country â€“ in military as well as political sectors. Only the dumb cannot appreciate that the KDF boss has scented political power â€“ and has subtly lunged at national politics and he is now firmly in the corridors of power. Indeed, he is much more than the top military man. He is dominant than the Presidency. He has amassed so much clout itâ€™s unlikely he will leave the arena soon, forget about his expected retirement next year. No wonder some powerful individuals have started placing him in pole position in the Uhuru succession race. That scenerio will ruffle many feathers including that of Deputy President William Ruto.

The Westgate attack last September thrust him onto the countryâ€™s murky political landscape. It gave him the political power and visibility â€“ and made the public aware he had influence to decide this countryâ€™s destiny. According to insiders at the Department of Defense (DoD), his decision to call in the Military at Westgate was unilateral; Parliament merely rubberstamped the decision weeks later, to give it the constitutional fidelity.

At the numerous news conferences during the Westgate siege, Karangi donned civilian outfit and was in charge of the goings-on. Others â€“ Kimaiyo, Gichangi, Raychelle Omamo (Defence Cabinet secretary) and Joseph Ole Lenku (Internal Security cabinet secretary) â€“ merely flanked him and his position. In fact, his position in the hierarchy of Kenyaâ€™s power was reinforced when the Military bulldozed the General Service Unit (GSU) out of the besieged mall.

Even experts in haste to question the decision to deploy soldiers at Westgate, a domestic incident, were bamboozled. A year later, he has dispatched military units to volatile Lamu and frontier regions in northern Kenya, to flush out Al Shabaab terror. But the same experts are convinced that Karangi could be behind a new move to introduce the so-called Omnibus Bill â€“ a raft of legislations that include handing the President and Defence Minister the authority to deploy soldiers without Parliamentâ€™s approval.

As stated above, Jubilee apparatchiks have envisaged a new multi-sectoral security unit to accommodate his departure. This unit is expected to draw Police, NIS, Immigration and the military. â€œWe are being told that there is a new unit that he will head. I really donâ€™t know but this is the rumour at the KDF headquarter,â€ a top soldier told The Nairobi Law Monthly.

It is still unclear Karangiâ€™s role after retirement. But the Prof Kindiki Kithure-fronted National Emergency Security Bill 2014 seeks to house all security operations under one roof. It will gather, among others a Cabinet Secretary, the Attorney General, KDF boss, Inspector General of Police, NIS director, director of the National Immigration and Foreign Service, director of Criminal Investigation Service, chairperson of the Council of Governors and the Director of Public Prosecution. â€œFor long, we have been reactive to security issues. The new department is designed to help pre-empt security threats and thwart them before they occur. This will help make Kenya safer,â€ says Prof Kindiki, the drafter of the Bill.

â€œThe service will act as a focal point to coordinate and deal with emergency situations that cause a serious threat and danger to national security and also ensure that the economic security of Kenya is not compromised.â€

If, as speculation has it, Karangi lands the position of the head of the proposed multi-sectoral unit, he will tower above everybody else in the security sector. â€œBecause all â€œindependentâ€ security chiefs will report to her/him directly, the unitâ€™s director generalâ€™s authority will be near that of the presidency,â€, according to a retired Army colonel. And this, perhaps, informs some cynicism that has welcomed the Bill. Certain leaders, including Lagdera MP Mohamed Shidiye, have isolated an ominous design in the proposed law. â€œWe are now engaged in police reforms, there is the NIS and their mandate is clear. Why should we add another structure? As they say too many cooks spoil the broth â€¦ Basically, it is untimely and we do not want to create a police state. Let every institution be properly equipped to play its part.â€

That apart; thereâ€™s some eerie link between the recent appointments at the NIS and Immigration departments and Prof Kindikiâ€™s move. Implicitly, Jubilee may be preparing Karangi for a key role in Kenyaâ€™s future â€“ and possibly in the crucial 2017. Based on its composition, the National Emergency Security Authority is a politico-military outfit, implying that were he to head it, he will throw on two suits â€“ civilian and military. And, observers feel, he is already doing a dress rehearsal.

Is Karangi preparing for his new engagement after walking out of the military? Close associates and allies in the Military claims that the new chief of NIS, Wachira Kameru, and his counterpart at the Immigration Department Major General (rtd) Gordon Kihalangwa, are Karangiâ€™s bosom chums. As the Director of Military Intelligence), Major General Philip Wachira Kamweru controlled a huge budget of aid from foreign donors that sorted Somaliaâ€™s transition before Kenyaâ€™s military blitzkrieg in October 2011. Kamweru and Kihalangwa will sit on the National Emergency Security Authority if formed. This unfolding scheme should worry deputy President Ruto. Whereas, Ruto sees himself as the natural political heir to president Uhuru Kenyatta, a parallel and competing political jugernaut that is designed to put General Karangi at the epicentre of Uhuruâ€™s succession plan may be planned as an alternative to Rutoâ€™s scheme.

For Karangi, the appointment of Kamweru and Khalangwa is strategic. While one will take care of the intelligence, the other will be in charge of registration of voters and issuance of identity cards. â€œOnce there, they will form a great back up for Karangi if he decides to seek the job. You can be sure Uhuru will be happy to see Karangi continue to play key role in Kenyaâ€™s front,â€ says a serving Major.

So, to what extent does this backdrop explain the exit of Michael Gichangi? â€œThere has been too much struggle between Karangi and Gichangi. Even the (House) committee in which I sit of defence and foreign relations has been struggling to reconcile the two. The two have been fighting for too long,â€ Gem MP Jakayo Midiwo told The Standard. â€œGichangi did not resign: he was fired nicely,â€ said political analyst, Mutahi Ngunyi.

The Westgate Mall attack is at the centre of the perceived Gichangi-Karangi feud. Whereas the NIS made it known â€“ even leaked to the media â€“ reports indicating that it had forewarned the government bout the terrorist raid a year in advance, the countryâ€™s leading security organ, National Security advisory Council, appeared to contradict this position. â€œBriefs were made to (National Security Council members) informing them of increasing threat of terrorism and of plans to launch simultaneous attacks in Nairobi and Mombasa around September 13 and 20, 2013,â€ the report says.

Major General Karangi is subtly on the upward trajectory path of Kenyaâ€™s politics. In Jubilee, he is a colossus who may be relied upon to play another influential role in the politics during the 2017/18 electoral period. Those who have extended his tenure at the DoD are aware about his sway in Kenyaâ€™s politics.

This piece was Published the HIGHLY respected The Nairobi Law Monthly