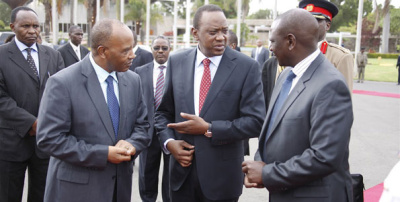 It’s been nine months since Uhuru was sworn in as President after the March 4th controversial election and subsequent shameful ruling by the Supreme Court of Kenya YET no progress registered in any sector other than the ICC.

It has been nine months of downward economic ruin, inflation hit high heavens making cost of living unbearable to millions of Kenyans and sending millions to the UNDIGNIFIED club of those surviving on a dollar per day, to be precise the nine months of Uhuru administration have seen more Kenyans relegated to POVERTY- a total opposite of what his coalition of two big tribes promised Kenyans.

Insecurity escalated in the 9 month period. Ignore the cooked police statistics; we all know cases of violence on innocent civilians (Bungoma killings), armed robbery, petty pickpocketing and terrorism were on the rise. Westgate terror attack and how it was handled is a clear KEY performance INDICATOR that gives Jubilee a straight E! The siege in Pokot/Turkana village where some militia declared some form of cessation was a harrowing experience most residents may not want to talk about.

Now, with Uhuru scoring below average with straight Cs, Ds and Es in Key Performance Indicators like Economic Management, Security, Devolution (constitutional Implementation), worse of all is JOB CREATION where he scores an F score (failed to take exam) for the fact that he has proposed to retrench 100,000 civil servants!

BUT let us be fair, the president has an an A score in ICC matters- the little personal matter that he promoted to a national issue and later a continental issue (African Union) and later a good score at the Assembly of State Parties in the Hague only to hit rocks at the UN Security- a sterling performance!

Yes, other than the Â ICC there is nothing to write home about in his 1st anniversary come March 2014. the Jubilee promises; from the famous Laptops for class one’s, A million jobs, tractors for hire to farmers, roads, security et el were all that. . . JUST PROMISES, and the Kusema na Kutenda is no more….

Now that the King is NAKED, the president’s senior political advisors have decided to cover the raw parts of the exposed King’s nakedness, and that is how one ERIC NG’ENO, a junior State House staffer in charge of Speech and Propaganda (they call it messaging) came guns blazing on the civil service!

First note that Eric Ng’eno, according to civil service code, is NOT ALLOWED to comment matters of the state publicly, only his boss, one “big” fine gentleman called Â Manoah Esipisu has authority to open his mouth.

Eric Ng’eno’s message has been given undue advantage by the Nation Media Group (no suprise at all) and of course been widely circulated by the president’s head of Facebook mobilization and dissemination (they call it NEW MEDIA but some haters call it BRAINWASHING).

What Ngeno is saying is that Jubilee has nothing to show in the nine months and also offering a much needed excuse of WHY UHURU MADE THE LIVELIHOODS of millions of Kenyans WORSE” and for that he is ready to blame one fine gentleman from Nyeri -Mr Kimemia and the dedicated CIVIL SERVICE for frustrating a president who seem to have power over Parliament and even Judiciary.

It is no news to Kenyans THAT the key role some senior civil servants played in Uhuru’s election at polling centres and vote counting without forgetting the crucial supreme court ruling; some of the so called civil servants have been overhead claiming to own the presidency- that ends there, Uhuru is a FREE MAN, he can fire Kimemia, Iringo et al for all we care.

Once Ruto averred that there were shortage of fools in Kenya, Oh yes we number into millions those of us who buy any shit told by the president’s handlers.

In short Uhuru’s handlers are using the clean smart young man (Eric Ngeno) from Rift valley to blind Kenyans of the regime’s incompetence.

So, when one Alfred Keter demands that powerful civil servants who fixed Ruto should be sacked, Ng’eno on the other says the same bureaucrats are frustrating service delivery – the question then is: Why are the likes of Duale demonising Keter and at the same time praising Ng’eno?

Truth be told our president needs prayers, if the economy sinks further we all suffer, Uhuru needs support of all Kenyans to sort out the mess we are in, BUT he must be honest to Kenyans, distorting facts and manipulating institutions will not solve anything but make it worse.

With ordinary Kenyans including Uhuru’s hardcore supporters feeling the pain of economic misery it won’t take long before they rebel against him, people don’t eat tribes.

Uhuru should end the propaganda circus and find a way forward to improve the livilihood of Kenyans.