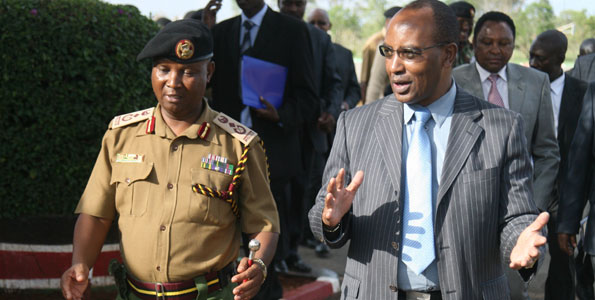 This is Part II of the the two part opinion piece on allegations by CORD of advance rigging of the March 4th general election by top government bureaucrats.

And as you know one thing leads to another, the problem in 2007 was that the rigging blueprint did not unfold as projected.

And so as Railaâ€™s lead continued to grow, one thing leads to another. In 2007, when things didnâ€™t go as they had promised their masters, one thing led to another as they resorted to bloodshed, to contain the situation.

Malcolm Xâ€™s â€œBy all means necessaryâ€ became the mantra that resulted in a middle of the night swearing in, and 1300 lives lost. End result is that Uhuru and Muthaura are now paying for their sins. Bensouda is breathing a life sentence down their necks.

Ruto and Sang, like I have always stated are just prisoners of war, as observed by another author- currently kidnapped by TNA- through threats by the custodians of ICC evidence.

Raila as president will ensure the four Kenyansâ€™ trial is conducted locally.

Ruto and Sang Â were on the side of the good pitted against the evil, defending a stolen presidency.They were fixed by PNU, now TNA bureaucrats like Gichangi of NSIS and Kimemia who control instruments of power out to get at them for supporting Raila in 2007.

Now that brings me to the TNA â€œone thing leads to anotherâ€ analogy of criminology to explain TNA behavior and it is best explained through the story of if someone murders another, what do you do? You want to wash away the blood to erase evidence.

Then suddenly you discover CCTV cameras caught you in the act, then you destroy them. Â As you destroy the cameras a watchman comes in and sees you destroying them- another crime, then because dead men donâ€™t talk, you kill the watchman, then now you have 2 first degree murders to deal with.

Â Then now you panic, and want to run away so you can say on the day of the crime you were in Nyeri and not Gatundu where the crime occurred. So a man gotta drive to get to Nyeri from Gatundu right? To drive you need a car.

You steal a car, from a woman driving by at gun point. Now you have a robbery with violence charge.

Then on the way to Nyeri, you find road-blocks, and you panic, thinking they are waiting for you and engage unsuspecting police in a shoot out. You leave your car and begin to run into the bush. And there now you become a fugitive. Then as you run, you feel hungry, and a man gotta eat, right. You enter a restaurant and eat, but then you donâ€™t have money. You have to chonga waruâ€¦â€¦..it can go on and on.

Now one thing leads to another as you can see is the dangerous game that Jubilee in cahoots with the tripartite Government officials, led by Kimemia et al are playing by devising their Terrorist style blueprint OPERATION GRENADE ATTACK.

It has its roots in 2005, when Kibaki lost in the referendum. Those numbers were used to estimate the top-up necessary to give Kibaki a win. And so in 2007 they waited for all Raila precincts to be released. After that they started topping up, with turn out higher than registered voters in Central and Meru.

Juja is the best example whose 110% voter turnout was corroborated by Kiambu TNA gubernatorial aspirant, William Kabogo. Kabogo won the petition based on those numbers.

Then ICC came, and now you had Uhuru and Muthaura trying to cover up, by frustrating ICC investigators. The appointment of Githu Muigai was part of that cover up strategy. They also had a queer interest in the appointment of DPP. One thing leads to another.

Saitotiâ€™s death is still unresolved mystery, of an Internal Security Minister Chairing a Cabinet sub-committee that was the link between Nairobi and The Hague. Its bee widely alleged and reported elsewhere that his ethnic backgroundÂ  was complicating matters. One thing leads to another.

Fast Forward to 2007, and the ICC accused cannot afford to lose. With the international community breathing under their necks, all means necessary is their new mantra.

Now because we must win, the OPERATION GRENADEÂ  ATTACK as elucidated by this author in part 1Â  and which borrows heavily from the 2007 script has been devised as a prequel to the rigging strategy they call TOP-UP. And it means exaggerating the numbers from TNA and a few pockets of URP strongholds, to seal any unassailable Raila lead.

But this time they are preceding it with what in military-speak is called PSYCH-OPS, short for Psychological Operation. This must have been the input of Gichangi, and Gen Karangi, themselves people of sound military background.

It entails preparing the public in advance about an impending operation by announcing propaganda using loudspeakers that a â€œwar enemyâ€ has been defeated, to engineer surrenders and to get the public to shift their allegiance from the enemy forces.Â  The OPERATION GRENADE ATTACK rigging blue print has hallmarks of military operatives.

The propaganda in this case is that the election was won on Dec 18th when IEBC closed the voter register, The Tumekushashinda Initiative was sparked off by the Smart Octopus and consolidated by Ngunyiâ€™s Tyranny of Numbers. Â One thing leads to another.

As Kenyan taxpayers, Gichangi and Karangi be warned that they ought to be models of the society as is the military tradition world-wide and not set a bad precedent. Kenya isnâ€™t a Junta. They should put Kenya before tribe. Kenya isnâ€™t ready to be like Sani Abachaâ€™s Nigeria.

Kibaki, these people are in your Command, Court Martial them for being a disgrace to Kenyaâ€™s Security Interests. Otherwise you have Command Responsibility.

So this is how the TNA one thing leads to another will ends, OPERATION GRENADE ATTACK will be implemented on March 4th. But the public is aware, then they will be exposed. And then it will feature at The Hague, in the week after elections.

Bensouda would have sharpened her arsenal of evidence. Kimemia, et al shall be held responsible for being part of a clandestine activity.

Then from Ocampo 4, add Bensouda 3 and you have 7 people at the Hague, and if Uhuru wins, it will be at the government expense. One thing leads to another as Sanctions are imposed, because there is not a way on earth that a sane human being can hand evidence against himself to ICC.

That would mean non-co-operation, and its consequences will follow. But the TEAM GRENADE ATTACK should be halted from making Kenya a failed state. This time, unlike 2007, Kenya will fry in its own fat like pork. Due to the architects of the Al-Shabaab style of OPERATION GRENADE ATTACK, Kenyans would have proved that they are fools, with very short memories.

You can read Part I of this here : https://www.kenya-today.com/opinion/election-rigging-claims-and-mutahi-ngunyis-tyranny-of-numbers