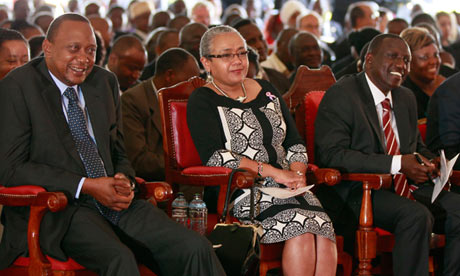 Margaret Kenyatta Strongly Enters Uhuru Succession Race, Much to the Chagrin of Rift Valley
By Phil Wesonga
Here is the official announcement of Margaret Kenyatta’s entry into the Uhuru Kenyatta succession race. All the marathon running, and other charitable activities were and continue to be a carefully choreographed public relations scheme to package and sell Mrs. Kenyatta as a viable occupant of State House.

URP’s William Ruto, he who thought he had no challenge after Uhuru Kenyatta will be in for a rude shock to discover that there is a more popular candidate than him, and that candidate is not from CORD but very much within the Jubilee coalition. What’s more, while Uhuru’s case at ICC is tinkering collapse at The Hague, DP Ruto’s case, with witnesses planted by Iringo and others in Uhuru’s camp, is going strong with a conviction very likely in the coming months.

The IPSOS survey is one that was sponsored to attempt to rubbish the referendum bid, but also tell us that there is a viable president within the Kenyatta family, besides Uhuru.

Kalenjin Counties in adrift Valley had hoped that their son William Ruto would have a smooth entry into State House by consolidating both the Kalenjin and an unaguaranteed GEMA vote in 2022, or even 2017 if Kenyatta becomes unpopular.