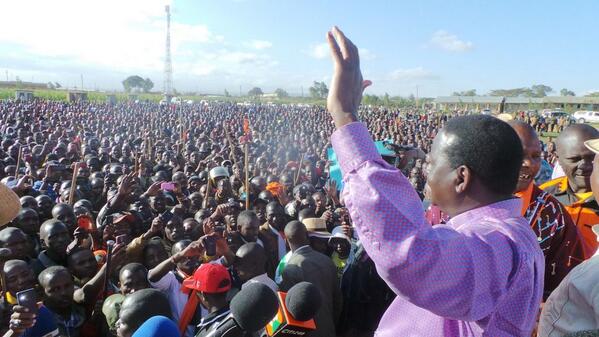 By Eliud Owalo
Judging from the ongoing political agitations in the Country, there is no doubt that the historic Saba Saba day is well remembered and regarded in Kenyaâ€™s political history. It was on the 7th day of July 1991 when the Countryâ€™s veteran politicians attempted to gather at Kamukunji grounds in Nairobi to demand political and Constitutional reforms in the Country.

Historically, the second liberation was preceded by the first liberation struggle which led to the independence of the Country. But the Countryâ€™s political history would be incomplete without mention of Raila Odinga, Kenneth Matiba, and Charles Rubia whose pioneering demand for political change preceded attempts to organize the first Saba Saba rally, and who were already in jail by the time efforts were being made to organize a public rally at Kamukunji grounds in Nairobi.

By then, Kenya was a de jure one party State in which both political and democratic spaces were highly limited and restricted. The expected gathering at Kamukunji on that day was never to be as the Government ordered the arrest and incarceration of key rally organizers. Others were blocked from attending the rally but this did not put off the agitations and pressure for reforms which the Government subsequently yielded to by 1992 when the Constitution was hurriedly repealed to make Kenya a multi – party State. It was, indeed, first round victory for the political reformists in the Country.

Now, as in 1991, opposition political groups are agitating for a popular National Dialogue in order to address burning issues of the day, which include rising insecurity and the need for security sector reforms, overhaul and audit of the Independent Electoral and Boundaries Commission (IEBC) and full implementation of the devolved system of Governance in compliance with the Constitution. Other pertinent issues at play include high cost of living index, high-level mega corruption, spiraling inflation, discriminative employment in the public service sector, and misdirected foreign affairs policy.

The current call for a National Dialogue to address key issues affecting the Nation is being spearheaded by Leaders of the Coalition for Reform and Democracy (CORD) led by Raila Odinga, Stephen Kalonzo Musyoka and Moses Wetangula, and the move is backed by the civil society, faith-based organizations, trade unions, youth and women groups.

Indeed, Cordâ€™s challenges to the Government on issues of governance has raised huge hopes for the populace who now feel that the Government is inept. The opposition has so far addressed several public rallies, which contrary to the police service warnings, have been largely, peaceful, orderly and well attended. Such rallies have been held at Uhuru Park â€“ Nairobi, Eastleigh â€“ Nairobi, Tononoka â€“ Mombasa, Kisumu, Migori and Kakamega. More rallies are underway in other parts of the country, pending the holding of a major one at Uhuru Park in Nairobi on Saba Saba day.

The rallies have been unique in the sense that the people have robustly expressed their dissatisfaction with the Governmentâ€™s performance in specific sectors and have accordingly called for remedial action.

Admittedly, the Government has been exposed as faltering in managing governance issues effectively. The number and frequency of attacks in some parts of the Country has brought into question the preparedness of security agencies to deal with security challenges facing the Country. Acts of propaganda and disinformation by the government, often, directed at the opposition groups seem not to be helpful in restoring normalcy.

Clearly, the state of insecurity is now the single most and worrisome issue in the Country. So far, it has caused frequent issuance of travel advisories by key Western embassies; it has also discouraged the visit to Kenya by Western tourists and investors. Holding all factors constant, it is envisaged that most hotels will not only close shop but a massive number of jobs will also be lost.

Instructively, in the run – up to 1997 general elections, the KANU Government yielded to pressure from the opposition groups, Faith based organizations and civil society and allowed the formation of Inter- parliamentary parties group (IPPG) meetings to discuss how a fair and credible electoral body could be constituted prior to the general elections held in that year. Notably, a consensual agreement was reached after a series of talks at Ufungamano House, involving political groups, civil society and Faith based organizations.

The result of the said Inter – parliamentary partiesâ€™ talks was that both the then ruling and opposition parties agreed on the number of people each side had to nominate to serve in the electoral body. However, at the moment the Country is facing multiplicity of serious problems which can only be addressed comprehensively through a National Dialogue

Although the opposition group, Cord, has been consistent in urging the Government to facilitate a National Dialogue in order to address the burning issues of the day, the ruling elite has remained dismissive of the need for such a dialogue. In light of all these political altercations, Cord is set to organize a huge gathering at Uhuru Park in Nairobi on 7th July 2014. In the meantime, Cord rallies in different parts of the Country are in progress and the Government remains undecided on whether to accept a National Dialogue or not.

Putting the political posturing a side, there are pertinent issues which need to be addressed urgently and judging from the unwillingness of the Government to engage Cord, one can only guess that the anticipated Cordâ€™s Political storm on the Saba Saba day is likely to shake the political tectonic plates. Clearly, should the Jubilee Government remain intransigent, there could be post Saba Saba day rallies such as Nane Nane , Tisa Tisa , Kumi Kumi,e.t.c. Indeed, it is probable that based on past experience; the impending Saba Saba day rally could mark the beginning of the third and final liberation of the Country.