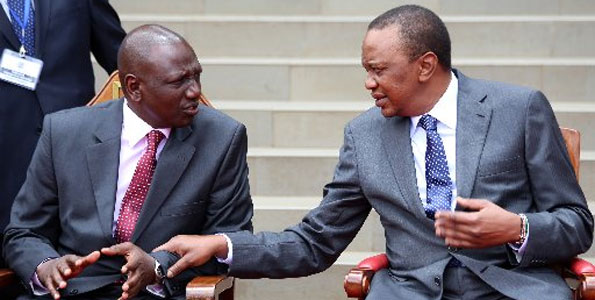 IS JUBILEE A. “KUSEMA NA KU-TENDER” GOVERNMENT OVERWHELMED BY CORRUPTION?

Prior to ascending to power, the Jubilee Coalition promised Kenyans that it would ensure zero tolerance to corruption especially in the management of public resources including land, funds, facilities etc. This had to be ensured under the principle of transparency and accountability on the use of public resources.

However, within less than two years in power, now, the Jubilee government is openly characterized, almost on daily basis, by grave cases of corruption involving misappropriation of public funds through unprocedural tendering contracts, questionable use of funds to procure public services, grabbing of public land by senior government officials, inflation of costs of public sector contracts as well as theft, imprudent and unlawful use of public funds as revealed by the Auditor General Reports and investigations by the Ethics and Anti- corruption Commission (EACC). Scandals such as hiring vehicles for police use have also been reported,amongst others.

The public has long waited, to no avail, for meaningful action to be taken against corrupt officials as prescribed by law. Instead, corrupt practices continue with impunity as the public gets entertained by endless investigations and mock trials which actually end nowhere. Rather it appears that the law penalizes petty thefts committed by ordinary people but not mega thefts committed by the big fish. This has become the order of the day in Kenya under the Jubilee Government where even Court orders and summons are openly defied by high ranking government officials.

It is instructive to recall that the Jubilee Coalition promised a lot of development related programs in its 2013 campaign manifesto. Such programs included, standard gauge railway (SGR), Laptops for pupils, irrigation projects, etc. but none of these pledges has taken off amicably. Most of them are facing legal challenges in law Courts due to internal competing interests and corruption which has underlined their procurement.

Interestingly, in an effort to divert public attention, the Jubilee Government has now embarked on diversionary tactics aimed at hiding the corrupt face of the national government. There is much talk against the management of resources by county government under the leadership of governors and less talk of misuse of public resources by the national government headed by the President and his Deputy. This is the case despite the fact that much of the financial scams as revealed by oversight institutions lies with the national government which still retains 85% of the revenue relative to 47 county governments which share a meager 15% of the government revenue between them. Instead of directing the Anti Corruption and Law Enforcement Agencies to focus on misuse of funds and other resources at both the National and County Governments, the ruling executive has tended to focus more on financial abuses by the latter governments.

Tellingly, the public watchdogs outside government control such as NGOs and the media have either been manipulated or threatened into silence. The public hardly hears any reports on plunder of public resources from NGOs or the Mainstream National Media, both of which have been silenced by restrictive legislative enactments. In particular, the NGOs are still struggling to oppose the governmentâ€™s attempts to restrict to a maximum of 15% the amount of funding they can get from the donors. As regards official oversight bodies such as Parliament, the duty has shifted to the unconstitutional one of praising the ruling executive instead of exercising its watchdog roles over the excesses of the executive.

Despite the ban on public fund raising by state officers including elected officials, the Jubilee Government has created further confusion to the public by behaving contrary to the law which is aimed at curtailing participation of such officials in fundraising for purposes of preventing corruption. Under the Jubilee Administration, it seems now that the Deputy President Mr. William Ruto is leading the way in championing the Harambee spirit contrary to the law. This has left the public wondering whether the government has resorted to Harambee as the means to development instead of the official development plans which should be anchored on an appropriate legislative framework and funded by the National Government.

In conclusion, the country seems to be having no effective institutional watchdogs in place, both in the private and public sectors. Indeed, this is really disturbing for it appears that the Jubilee Government has become over whelmed by corruption, which now writs large in our society. This is why I insist that this Government is pre-occupied with pursuit of Economic Rent,thus a “Kusema na Ku-Tender Government”.