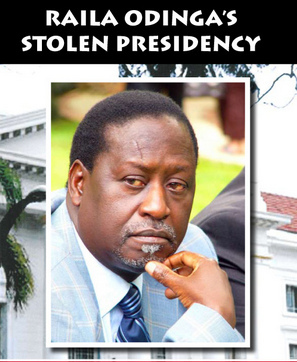 Gloom following defeat in the 2013 Presidential election has engulfed CORD strongholds. This is normal after a sapping contest. Why it appears so tragic is because the ticket of the virtual incumbent actually lost the election. The Prime Minister, as a principal in the coalition government, and the Vice President, as his running mate, were the incumbent government within the context of the contest. The pain of loss would not have been expected by CORD supporters. So, they are in their right to be depressed.

There is no honour in loss, but, there is a slight chance, even an opportunity, of redemption. Loss allows a team to re-examine its strengths and weaknesses, and to re-evaluate its information â€“ the basis on which it took decisions that led to defeat. Unless the spirit is killed, from the lonely valleys of loss, a team can only rise higher. The effort of climbing will be strenuous, but climb they must. Which bring us to the question: which is the surest way up? The best way to arise is to buttress oneâ€™s defences and to buffer oneâ€™s forts.

In modern political perspectives, the best way is to bolster the teamâ€™s economic and social environment â€“ to strengthen it, and shield it from winds that may seek to shake it. By seeking economic independence, the political aspirations of the team will be protected from salvos and inhibitive machinations hatched by the opposition. It will not be difficult to exhibit and for others to see. Under the Moi Regime, the people of Central Kenya were economically frustrated by Kalenjin stranglehold on the whole economic system.

GEMA and other non-Kalenjin peoples could not access loans from KCB, National Bank, the Consolidated Bank and other local owned banking institutions. And most could not qualify for credit from foreign-owned banks operating in Kenya. Only the Kalenjin, and the Asian business community that subscribed to the Any- Government-In-Power doctrine could thrive. GEMA hit back. They planned; thought, and, established their own financial backbone. From their savings and credit co-operative unions, and building societies, they created Equity Building Society, to later become Equity Bank, when Mwai Kibaki attained the Presidency.

In the footsteps of Equity, they had Family Finance. This retreat to the trenches of the financial inclusion struggle has yielded immense returns. Through formal financial education, GEMA has created a critical mass of experts in the sector, including insurers, bankers, advisors, researchers, analysts, brokers and other industry leaders. It is not a coincidence that GEMA people so thoroughly dominate Kenyaâ€™s financial river-flow. With this economic muscle, it is not hard to convince themselves, their supporters, and international investors that any new regime that threatens GEMAâ€™s political interests is a threat to everyone in Kenya. Deliberately, everyone here excludes the interests competing against GEMA.

There is no logical or philosophical defense against another personâ€™s or groupâ€™s private interests! No person will currently dispute the effect that deep pockets, and economic dependency has had on the electorate and other vital decision- makers on the 2013 electoral process. Coalitions were cobbled by purchase, and electorates were swayed by the glitz and glamour of campaign machineries. The winning side splurged, unmistakably. It is the stuff of common banter, that the Jubilee Campaign was generous to a fault. One can only do that if they have donors, rich friends and inexhaustible wells of cash.

The lesson from that is that, if Kavirondo people and the rest of the CORD support bases â€“ who are clearly the majority population â€“ want to grow their economic muscle, they must fight this battle from the trenches, too.

Look at the Somali-Kenyans! They are barely 5% of the population. These folks, forever, have
been outsiders in the republic. Distrusted and actually hunted down by Mzee Kenyattaâ€™s regime,
and even massacred by the Moi administration, they walked the lonely path. Somali-Kenyans inhabit the least economically productive lands in Kenya. Sparsely located and thusÂ  not served by any meaningful infrastructure, they are the epitome of Â â€œofficial neglectâ€. Yet, with unity of purpose, Somali-Kenyans have chosen to arise from the ashes of their pain, have entrenched themselves economically, and now run Nairobiâ€™s Eastleigh business hub and suburb. For their fast rising economic power, they are to be found in all of Kenyaâ€™s power congresses.

Without the freedoms and easy access available to Big Six like the Luos, Luhyas,
Kambas, and the Gusii, anywhere in Kenya, the Somali Kenyan has fought hard for economic
survival and had all things added to him. She has her own Banks, her own insurance companies, her own business lines and her own legal infrastructure. The Somali Kenyan can surviveÂ  despite the mercy or inclemency of changing regimes.
If anything, Kenya might sooner get a Somali- Kenyan president than a Luhya, Kamba or Luo â€“because perceptions will assure us that a minority president will take care of the interests of communities both big and small, and will be less polarizing! But that would be an analytical
and cosmological falsehood. The truth is that the Kenyan-Somali has the economic, intellectual, social and therefore the political wherewithal to win our support for his candidature or her.
Now, Kavirondo must appreciate this. Donâ€™t follow the cantankerous and disillusioned yob
who claims that Nyanza si Kenya! Do not dismiss the Mombasa Republican. Â Donâ€™t listen to the proponents of secession who want another South Sudan. Our sweat has created Kenya, so we, cannot just give it up to anyone or any one community. If we have to die or lose it, let us
win and lose from within. No one should think they can win by running out â€¦ they will have left your soul inside, and that is cowardice.

The Kikuyu established themselves against adversity. The Somali-Kenyan has undergone even worse adversity. But our new Kenya makes it easier for Kavirondo. We need not fight inequality and discrimination. We need not be shot by home-guards or be detained by colonial and post-independence administrations to earn the freedom of expression and movement. We have the freedoms of the whole world to endeavour and succeed. It took GEMA 70 slow years to rise. It took the Somali-Kenyan a painful 40 years to achieve citizenship-equality. We need just a decade to have this power.

Only when we have our own Banks, Insurers, Transporters, Warehouses, Factories and Schools shall we have the right to feel depressed after losing an election. Only then shall we earn equal standing at the Supreme Court in Kenya, to demand equality of treatment in the process of Statecraft. Only then, shall we win political power fairly.
Onwards to the execution: and whosoever opposes this way up, is the enemy of Kavirondo, and must be fought with all the life that is in us and is us.

(Minor editing was done to this article to fit our readership)