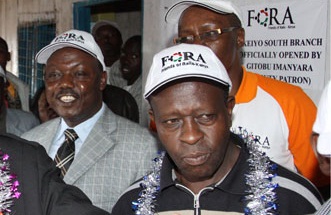 Could Head of Public Service Francis Kimemia, the Office of the President (PS Mutea Iringo), NSIS Director General Michael Gichangi , Inspector General of Police David Kimaiyo and state security operatives be secretly doctoring the election results to rob Kenyans of their democratically elected leadership? Why are ISAAK HASSAN and his IEBC team handling the process, and especially the tallying in a very suspect manner? At whose behest are they deliberately misbehaving?

The entire country is in disbelief at the shocking inconsistencies and slovenly work by the Independent Electoral and Boundaries Commission (IEBC) since the 2013 election exercise proper kicked off in earnest on Monday.

The abrupt system failure that killed off some 80% of the electronic voting system across the country on voting day was inexcusable. It forced most polling stations to revert to the manual voter register; a move that contravened the national consensus which dictated that the electronic system was a must for us to have a break from the challenges that messed up the 2007 and previous elections.

This was later to be followed in quick succession with a similar electronic system failure during relaying of the results to the tallying centre. Many have blamed it on hacking while other Kenyans see it as very suspect and maybe meant to compromise tallying and hence doctor the results.

It is quite telling that while all these were happening IEBC chairman Isaak Hassan and his team have been quiet and have not sought quick intervention from the manufacturers of the BVR kit nor the suppliers to either clear the air or rectify the mess. Instead they have happily proceeded to revert to the cumbersome and corruption prone manual system as if they are beholden to it or they have been compelled to use it by some hidden powerful forces.

Is it not surprising that immediately they reverted to manual tallying the huge numbers of spoilt votes started vanishing into thin air? Besides what was the justification and rationale for kicking out all agents from the national tallying centre at Bomas of Kenya? What does IEBC want to do in secret?

We join CORD Coalition top leadership in their call for an immediate stop to tallying and relaying the results accrued from the manual tallying since it is unconstitutional and suspect. The law is clear that tallying has to run on manual and electronic relay concurrently. That law has not been amended. Why is IEBC bending it deliberately and carelessly?

All eyes are on IEBC chair Isaak Hassan. If this election is bungled again like the 2007 one, the children of Kenya will never forgive him. He is constitutionally tasked with ensuring that the conduct of the elections is free, fair, and democratic and as above board as best ever. Up to this moment he is disappointing in a big way.

We at FORA take this early opportunity to support our CORD leaders for being alert and voicing their objections in time. We also call upon all CORD supporters countrywide to remain calm and keep the peace as the setbacks are being addressed by our able leaders.

It is disheartening that powerful state institutions, mainly the main security agencies are on the side of one of the coalitions and want to force their preferred coalition on Kenyans as the new government at all costs. They should be reminded that Kenyans are seeing their electoral fraud and transgressions and will soon take them to task. They should be reminded loudly that the reason why our constitution provides for democracy and democratic elections is because it is the right of wananchi to freely choose their leaders and not to be imposed on leaders by partisan state actors.

We at FORA stand for peace and a peaceful transition. We urge other Kenyans to join us in promoting peace. And IEBC must know that by mismanaging the election they are undermining national peace. They must stop it.