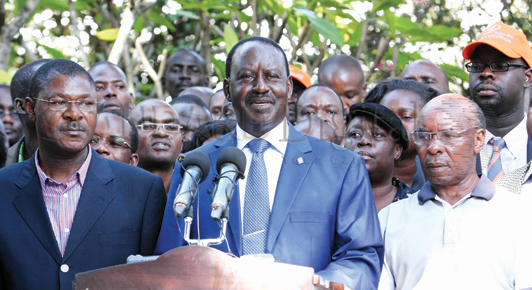 First is that Sanctions are coming; Thanks to reckless campaign rhetoric by Jubilee, Obama has warned US journalists that Kenya is not secure for American journalists. What he is saying in Security speak, is that he cannot guarantee their security. And he acts mostly based on intelligence briefings.

This will have a trickledown effect, as tourism gets fed with such information. Hint is that if journalists arenâ€™t secure, then Americans arenâ€™t secure. So they wonâ€™t cover African news from Kenya, but from another country like Tanzania. Thatâ€™s dollars lost. Americans in Kenya will run away from danger posed to them by the new Kenyan government.

Then now sanctions will bite soon. Free advice, stock up food. We are in trouble. Plus we donâ€™t know what bombshell the Supreme Court may drop. It might annul the Presidential vote. Anything is possible. Uhuru, keep your fingers crossed.

These are all the snow ball effect s of an election that didnâ€™t appear very transparent and credible- at least in the eyes of the international community. To date no single powerful world leader has congratulated Uhuru Kenyatta by emerging to in a rigged election, but instead many have congratulated Kenyans for conducting a peaceful election albeit in a fraud process.

From the New York Times, to the Guardian in London, what shocked the international community is how in a random process, where vote tallies are popping in from all corners of the country, you cannot have a gap staying essentially the same, 52-40 for several days; just like in a controlled experiment where variables are being manipulated.

Then we had spoilt votes being multiplied by 3 as confessed by the IEBC Chair. Somebody programmed the BVR system that way. What else did they program the system to do? Who programmed it that way? What was his motive? And who was his/her masters? Those are the things that the supreme court will seek to answer.

Unlike KANU days, you need good consultancy to pull such a stunt.Â  It was a digital statistical marvel. Only happens in a controlled experiment. Highly controlled lab experiments.Â  But it wasnâ€™t smart enough, because the â€œanalogueâ€ could see through their actions, and is about to expose them in court.

That was the case in this election tallying. Itâ€™s only in lab experiments where the variables are controlled that you see this type of thing. What am I saying? It appeared as though there was a hidden hand that made this counting process behave in a certain way. Gap staying the same without fluctuations, the entire tallying period. It takes a human hand for something to behave like that. Its not a natural progression, but rather appears artificial.

Even though not widely contested, I have always questioned the voter register. Going forward, use of primary schools should cease being the basis of determining voter centers.

Here is the problem of primary schools. They are more dense in Jubilee strongholds. Due to the history of our country, regions that have been well endowed with the presidency have more schools per square mile than places that are marginalized. Schools distribution in our country is unevenly skewed in favor of Jubilee strongholds-having produced the last 3 presidents. Â And this distribution will get more uneven if they favor the only regions that their votes came from.

CORD strongholds are marginalized, and when voter registration centers arenâ€™t distributed evenly, thatâ€™s the beginning of disenfranchising a large swathe of the nation. IEBC deliberately ignored this fact, when they chose schools as their center of operation. We must make Kenya equal in development if we are to have credible polls. That means helping marginalized areas catch up with the rest.

March 4th also proved to us that in the nations democratization process we have real and true reformers, and then we have pretenders to reform.

You have in that pretenders group as observed in the debate and early sycophantic concession speeches, persons who were not fighting for reform but only had a disdain for Moi. That is why when Kenyatta did it, they were fine.

Dare Moi do it, and they were willing to stand in the way of the bullet. Its time Kenyans differentiated between genuine reformers and tribal performers.