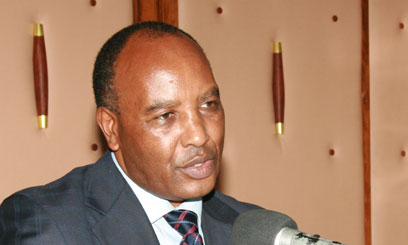 The Tyranny of numbers devised by the intellectual sell-out Mutahi Ngunyi, is a precursor to rigging in March 4th. The intention is to prepare Kenyans for the fake cooked up results that will show Uhuru has won despite only getting votes in Mt. Kenya and pockets of North Rift, as expected to be the case in March.

They are following the PNU 2007 script, whereby after the merchants of status quo a.k.a Â Mt.Kenya mafia sensed defeat as a result of a revolution from the rest of Kenya, they decided to inflate numbers in the Gema strongholds, otherwise known us top-up. Eventually, they had faked enough votes to put Kibaki in a small lead, despite losing overwhelmingly.

That is how we ended up with 110% in some PNU precincts in Mt. Kenya like Juja. Obviously itâ€™s impossible to have 110% unless you are exaggerating the numbers. It is what I call top-up strategy, which was then devised by Uhuru and Muthaura. But they are now paying for their sins at The Hague.

Testament to this unfolding strategy, Â the media is awash with news that Gichangi-NSIS Director, Kimemia- Head of Civil Service, Karangi- Chief of Defense Force, are all involved in a special clandestine rigging operation to strategize on how to rig the March 4th Gen election.

The alleged preliminary strategies so far devised by the TNA sympathetic trio led by Kimemia and code-named TEAM GRENADE ATTACK, include but are not limited to:

Human beings never seem to learn. Even while Muthaura is in the dock, a miserable man being prosecuted in The Hague, government officials donâ€™t seem to learn from hindsight.

But in this Mt.Kenya 2.0, it appears, its architects are debugging the problems of PNU folly in 2007. Kibakiâ€™s anathema was that not a single opinion poll showed him in the lead in the period leading up to the polls.

So Team TNA knows too well that a perception that there is a plausible path for them to win is paramount. This is an antithesis to 2007, where opinion polls and voting patterns in 2005 Referendum left no doubt that there was no way on earth that Kibaki could have won.

The beauty of the TNA strategy is that it addresses that problem. Hereâ€™s how.

All credible opinion polls Infotrack, Strategic PR, Ipsos Synovate and so on show Raila in the lead. So how do you counter that perception that Railaâ€™s lead is insurmountable and corroborated by numerous independent opinion polls?

That is how the Tyranny of Numbers and the Smart Octopus comes in. And they are intended to complement each other. Smart Octopus- whose credibility is in question is intended to be a firewall for the aforementioned credible opinion pollsters who have showed Raila consistently in the lead.

Tyranny of the numbers is a rogue number crunching strategy by TNA intended to use a desperate professor, Â intended to create an impression and therefore prepare Kenyans that even though Uhuru gets votes from only TNA strongholds, and a few pockets of URP strongholds of North Rift, and then gets declared winner, then it should be easy to believe.

That the Central Kenya vote plus a Half of the Kalenjin are enough to hand Jubilee victory. And that if voting patterns turn out that way as is widely predicted by analysts, then Kenyans should believe that it has come true as predicted by Mutahi Ngunyi.

That voters from 40 and half ethnic communities are outnumbered by voters from Central Kenya and half of Kalenjin. That is not just intellectual dishonesty, but also political brinkmanship that lacks in statistical depth, and is in itself a blatant affront on the tenets of polling science.

It is a well known fact that the tyranny of Numbers is the works of an outlaw political scientist, whose biased opinion column was rejected and discontinued by The Nation, proof that he is an intellectual sell out, histrionic and narcissistic dude hungry for attention who can go to any length to capitalize on quick buk making scheme. Using ethnic numbers to create impression that Uhuru can win. Negative ethnicity laced as predictive statistical simulation.

Ngunyi after rejection by the mainstream media has now been reduced to using dummy names in the blogs. He is once again at the brink of losing credibility in March, when his predictions once again lose crediilty when Raila wins in a landslide. In a margin wide enough, for any Kimemia et al top-up strategy to surmount.

The journey to reform Kenya shall have begun in earnest. President -elect Raila Odingaâ€™s Â in tray on day one shall have a lot, Â all geared to ensuring that Kenya regains its glory of being in the league of Singapore, Malaysia and South Koreaâ€¦â€¦..Uhuruâ€™s defeat in a landslide will save Kenya from self destruction, saving Kenya from the path to being like Zimbamwe, Syria, Somalia, Iran, and so onâ€¦ Uhuru nation would be a sanctioned nation. Thank God its not gonna happen.