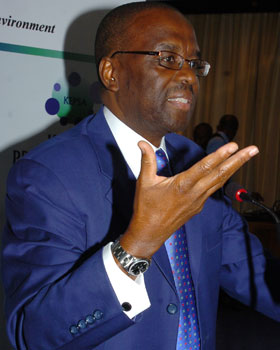 My attention has been drawn to an article written by the Chief Justice of the Republic entitled “The Judiciary Demands Justice from Kenyans!” When I came across this piece, I made the deliberate decision to read it as objectively as I possibly could, digest it and turn it over in my mind before giving my two cents on the matter.

What I pen down here represents my own individual opinion and view on the matter. I do not claim to be an authority on the Law, just a law-abiding citizen entitled and free, as guaranteed under the Katiba, to hold an opinion. That is all this is…An opinion! And my reason for writing this rejoinder is to encourage discourse in Kenyan society with the aim of self improvement as a People.

What I gathered from the Chief Justice is that he is disappointed at the harsh barbs he is being dealt primarily on social media following what some quarters perceive to be judicial misteps in the recent past. There was the matter of the Supreme Court ruling on the Presidential Election Petition which was followed in quick succession by the High Court dismissal of the Goldenberg affair leaving one, Mr. Kamlesh “Paul” Pattni, to go scott free.

Perhaps I may be able to shed some light as to why the Honorable Chief Justice may be bearing the brunt of a section of Kenyan society’s hostility. Sir, having been at the forefront of the struggle for democratization, I need not tell you that the people of our country are coming from an era where the word Justice was but a figment of our imagination.

Justice was but a dream, ever so close yet always just out of reach. Justice was perceived to be up for auction to the highest bidder and while many argue that many of the transgressions of the dark KANU days were indeed permissible in law, I submit that they remained grossly immoral and as such, they were indeed unjust! Many died…Pio Gama Pinto, JM Kariuki, Tom Mboya, Titus Adungosi, Julie Ward, Father Kaiser and more recently, George Saitoti. However, no person of significance has been brought to book for these political murders. Nobody has been held accountable for these excesses. We, the people, are traumatized!

It is on this background, that your appointment to the position of Chief Justice, after a gruesome vetting process, came with the promise of so much hope. Martin Luther King Jr said, “the arc of the moral universe may be long but it always bends towards Justice!” We finally dared to believe that after all this time, it would be possible for us to see what true and real Justice looked like. That came with expectations as well; expectations of what Justice would feel like. Sir, this neither looks like Justice nor feels like it! And to some extent, many speculate that in your heart of hearts, you know this. Could this be why the Supreme Court judges chose not to read their ruling? Despite having kept to your word and ensured that the Petition hearings were open to the public for the entire six days, at the most crucial moment, the Judges turned away from the Kenyan people. We needed to see you look into our eyes as you gave your collective reasons for arriving at the decision that you did. We needed you to face us. But you did not. So you will forgive us if we treat your demand for Justice with as much disdain as you treated our conscience’s need for satiety.