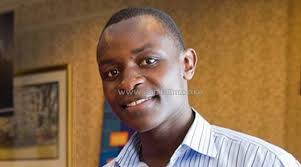 Photo by Capital FM
Blogger Dikembe Disembe has once again picked his perennial ‘war of words’ with nation media columnist Macharia Gaitho again. When he last punched Gaitho, he fundamentally differed with him on State house media breakfast. Here is the post:

Why I am bigoted.
———————-
Columnist Macharia Gaitho has accused me of having a ‘perpetually bigoted mindset’ just because I said I will wait, like the rest of Kenyans, to get the (kikuyu) thinking behind the appointment of Gen. Joseph Nkaissery as the new incoming Interior Cabinet secretary.

I come from a school of thought that believes there is nothing wrong with a community thinking together.

This is the post that has made the senior scribe to rile at me..

“It was Murithi Mutiga who first mooted this scandalous idea of President Uhuru appointing Joseph Nkaissery as Interior Cabinet Secretary. I wait to get the (kikuyu) thinking behind it from Macharia Franjes Gaitho. Ha ha ha!”

This is how Gaitho retorted:

“Dikembe Disembe, I wish you’d rid yourself of this perpetually bigoted mindset. That thinking limited to ethnic baiting is no credit to your political party and its leadership”.

Yes, Mutiga Murithi, writing on Daily Nation (Saturday May 10, 2014) an article titled ”Five things Uhuru can do to help calm a nation rattled by Shabaab” opined that appointing Gen Nkaissery would be the topmost panacea to ‘calm a nation’ fighting a ruthless, mindless foe using its usual internal incompetences.

To us in ODM, the solution to the current insecurity crisis remains what we’ve offered the country time and again – and we’ve been ignored – but will continue doing so.

We maintain that the current structure of internal security and defence cannot secure our towns and borders.

In no uncertain terms, ODM wants Gen Karangi to go and the defence forces returned to the era of Gen. Daudi Tonje rules. There has to be an end to ‘ethnic cleansing’ in the defence forces so as to allow officers who deserve their promotion to get them, and those who have served the nation well to go home and write books or lecture in the universities.

ODM also wants, like is the practise in all devolved, federal nations, that certain aspects of the country’s security be devolved to counties. One accusation of government response to the first mandera massacre is that security forces, whose command structure starts in Nairobi and ends in Nairobi, did not act even after Mandera Governor Ali Roba raised the red flag on Al shabaab presence; and their plans to harm Kenyans.

To cure this, ODM and CORD insists the police must be part of county governments as much as it is part of the national government. Comparatively, this scenario has worked well in other nations. It can work here!

These are ideals which I believe in as a person. I can bet on them. . .that they can help secure our country. What I don’t believe in, what I reject, is the fallacy that a single titular head of the police, more so a politician, can get us out of the current quagmire.

But as Mutiga prophetically claimed, appointing individuals of political value like Gen Nkaissery can ‘calm the nation’. Right now, the more religious of the Jubilee Alliance retrogrades are pointing a finger at us, shouting, ”we’ve appointed one of you, let’s see how you now fare”.

Trouble is; and this is why Gaitho, a fairly sober Jubilee Alliance gatekeeper, is spoiling for a fight: some of us cannot be calmed easily.

I am just too obstinate to believe that Kenya is safer with Gen. Nkaissery than it was (sic) with Ole Lenku. I am just too bigoted to accept that dishwater.

Philosophically, my mindset, if it is perennially bigoted, only goes to confirm how I believe in our (ODM/CORD) game. A true Orange young democrat believes in meritocracy.

We also believe in respect for human rights and a police force that is not designed to ensure the survival of a regime internally collapsing faster than we thought.

Gaitho accuses me of bigotry for a reason. To end a debate. To halt a conversation. To let the country accept as fait accompli the incompetence and insensitivity of President Uhuru’s regime – this digital nightmare.

What is this fete that Gen. Nkaissery has achieved that befits him in his new role?

Isn’t he the same Gen Nkaissery whom a Truth, Justice and Reconciliation Commission report found to have engaged in theft of pokot cattle during the 1984 ‘operation nyundo” to disarm pokots. Doesn’t the report say he transported the cows using kenya Army lorries to Kitale,Eldoret and Nairobi?

How fit is such a person considering one of the major accusations of the security forces is their collusion to sell charcoal and sugar from Somalia into Kenya in a multi-billion ‘war market’ industry?

Of all the things that is in short supply in Kenya, honesty dwarfs them all. The worst is journalistic dishonesty.

As a recent student of media, at least, I can still recall some media isms collectively referred to as ‘canons of journalism’ – honesty, objectivity and gikmakamago (Luo).

How can Gaitho accuse me of bigotry? If in my bigotry I can see through the facade that is currently being sold to the country and raise it up with important media players like Gaitho, how then do I become a bigot? Ditto!

I am a patriot. Gaitho knows this. He sure does.