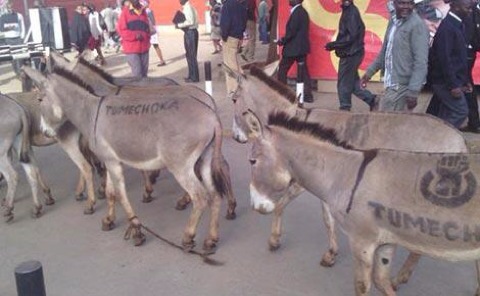 The choices Kenyans are being given for their WELL BEING are like day and night.

CORD wants the security to be devolved, and regions given more power to determine their security needs based on prevailing scenarios. JUBILEE wants security to remain with the so called ‘national government’, and regions to be subordinate players in security issues, the result being that no security intervention can be effected without Nairobi giving its official fiat.

CORD is discouraging the idea that individuals alone can secure Kenyans, thus has severally warned the people over overoptimism with the cosmetic changes in the police force of merely sacking Mr. Lenku and Mr. Kimaiyo and appointing Gen. Nkaissery and [whoever]. JUBILEE is encouraging the individualisation of the security forces, where titular heads are given more prominance than the institution of the security forces.

CORD wants a complete overhaul of the security apparatus, which entails depoliticisation, de-ethnicisation and, in the case of the Defence Forces, a return to Gen. Daudi Tonje rules with regard to promotions and retirement of uniformed officers. JUBILEE wants the current status quo to persist, where appointments and promotions are arbitrary and at the behest of the civilian politicians and their ethnic elites, without regard to meritocracy, seniority, contribution and service to the country.

CORD wants a country of civilians. JUBILEE wants a quasi-military and police state.

CORD wants a country where people discuss their differences openly and candidly, thus come to the same public judgment. JUBILEE is creating a country where conversations are driven by a limited spectrum of what is acceptable to the regime in power, its survival and the interests of its elites.

CORD wants a country where everyone works hard and enjoy the benefits of shared wealth and prosperity. JUBILEE is busy building a country of billionaire tenderpreneurs and millions, millions of quasi-poor people who marvel at ‘paper economy’ without ever having the fairest shot at life.

CORD wants a social democracy; where the excesses of capitalism is checked by strong pro-people policies. JUBILEE is building a neoliberal society where vulture capitalists feed on everyone, with no hope at ever making them accountable.

The choices Kenyans are being given for their WELL BEING are like day and night.