A few days ago Kenyans were treated to what seemed to be a reality and not the usual fantasies of the Uhuru regime like laptops for class ones, YES !, it was announced that the president was scheduled to tour Japan, Russia and China for three weeks …and SkypeÂ  was to be put onto significantÂ  use of-course.

Come the scheduled departure date -turns out it was another fantasy rumour that found its way to newsrooms of leading media houses, so what happened? or did the authorities of the said countries decline a rushed visit? or was it just propaganda to counter Obama’s snub on Uhuru?

In keeping them honest , a leading governance technocrat who served in the grand coalition government at the Prime Minister’s officeÂ  wondered loud the tragedy befalling the bureaucracy, here isÂ  his Facebook post made on Thursday 27th June that got thousands thinking of the “Jubilee got jokes” blockbuster movie due to hit post box-big screen soon;

“Utter lack of consonance in official statements coming from both the Presidency -OP and Ministry of Foreign Affairs-MFA. Just the other day, State House & associated mandarins reiterated Kenyatta’s whirlwind trips this week to Japan & UN powers China & Russia were confirmed and planned well in advance albeit not as a consequence of Obama tour that significantly skips Kenya.

Yesterday Foreign Affairs diplomatic gurus blamed the media for reporting untruths about trips that have never been lined up at all and that Kenya’s president is not going nowhere in the East(:)…

I now await the Government Spokesman’s clarification by mid day today that MFA got it all wrong”.

Was Uhuru blocked by Japan, China And Russia? If indeed it was propaganda, Statehouse/OP or MFA should have issued a timely statement to the contrary!

In a too little too late move, the MFA issued a statement denying any knowledge of Uhuru’s alleged trips- in practical plain sense termingÂ  the information peddled by the president’s men a hoax;
â€œThese erroneous reports have created a wrong impression on what informs Kenyaâ€™s diplomatic engagement. There are currently no scheduled State visits to the above mentioned countries as reported in the media,â€

May be, it is just timeÂ  for the president’s drinking buddies got clear what is official and what is beer talk, the Kenya media desperate to impress the regime is too eager to make any beer talk a news headline and tag it official position! . So, Uhuru’s tour to the famed East was just a beer talk, or a hoax! 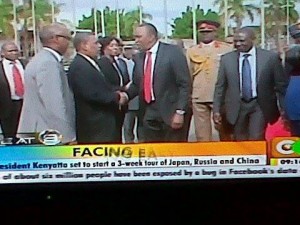 In the above picture captured on Citizen TV’s prime time news, it was reported in detail of Uhuru’s impending 3 weeks trip to the East! what came of it? or is it that the Chinese too are insisting on essential contact only! Kenyans deserve to be told the truth and appropriate apology tendered if indeed it a hoax, April fools day is so so so long gone!