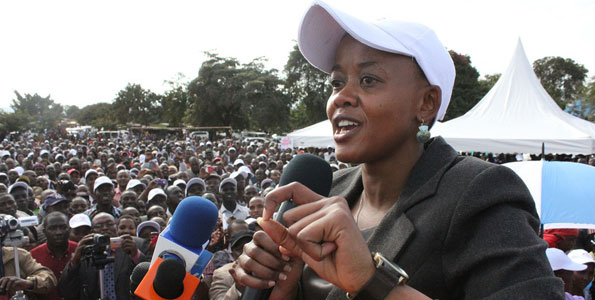 By Dikembe Disembe
Eviction of Kethi a big assault on women rights to elective franchise, oh and it is Seneca Falls Day!
Today, the 165th anniversary of the Seneca Falls Declaration (probably Rachel Shebesh has never heard this) is a sad day for women who still believe in the need to advance women’s place in public service. Today is a sad day to Elizabeth Cady Stanton, who, sixteen and half decades ago, presented the “declaration of sentiments” Â with final resolution that women had a right to VOTE, what she referred to as the SACRED RIGHT TO ELECTIVE FRANCHISE. Today, Mama Ida Odinga is sad because all the work she has done in improving the place of women voters and leaders in Kenya has been thrown out of the window.

I do not know how Njoki Ndung’u feels. I wish to be told how the many ‘women representatives’ now littering parliament buildings feel. I would be glad should I learn how the women in UhuRuto cabinet are feeling. But this latter group are not women, though they may be female.

Kethi Kilonzo was the epitome of what a breaking a glass ceiling is for women in our country. Brainy, articulate and mindful. That she represented Africog, an NGO being run by another woman doing God’s work here on earth, and won the admiration of many women, men, children and old people in the manner she took on sadistic male lawyers at the Supreme Court will remain one of the great women stories of my time. When I think of law and women, all I see is Kethi Kilonzo. When I think of the complex interplay between women, gender and politics, I see Kethi Kilonzo. When I think of the art of persuasion in rhetoric, I see this lady, I see Kethi.

Today, we have institutionalised politics of the corrupt, of murderers, of economic redlining, of media rent-seeking, of official mendacities and ethnic favouritism. It is politics which, in the sacred words of that great kenyan, Abduba Dida, “chooses Ferdinand Waititu over Jimnah Mbaru”.

What saddens in this kind of politics is that it eventually lowers the progress of a society. It delays take-off. It puts political quacks in places where they have to oversee the flow of a society’s energy, innovativeness, fears, hopes, aspirations and mortal dangers. It makes them vanguards of the safety and security of the society. Â What do we get? You all can tell: a parliament fool of ‘pigs’, a government full of rent-seekers and queer characters, media institutions full of twitter and Facebook journalists, churches and mosques full of people like John Njue, universities full of coward and useless professors. I said it.

Does it bother you that no respected Kenyan scholar in political science has come out openly to ‘say something’ about the post-march 4 Kenya with an indicted president? If not for anything but the pride of a country in the comity of nations? Isn’t it revolting that there is a generation of Kenyans who believe ‘fully’ and ‘hang on every word’ of one political geek called Mutahi Ngunyi? A man who believes our country’s political competition must end fatal devastation of the looser by the winner? And preaches that openly? Really?

It is in this Kenya where Kethi Kilonzo finds her reputation and career being watered down by people who believe our country’s politics must be monolithic for them to survive. It is in this Kenya where a woman who represents everything that every little girl should look upto, finds herself being rendered pathologically irrelevant in the politics of the current politics of everything goes.

Kethi Kilonzo; the person, is out (such is the law), but Kethi Kilonzo, the spirit, lives on! Her spirit lives on in the dumbfounded kids in Makueni who wonder ‘what happened?’, her spirit lives on in the thousands of women who struggle each day to end male chauvinism in the workplace, at home, in church, in public transport vehicles, in social media discussions, in mainstream media newsrooms, in morning radio talk shows and yes, in academia.

This far is the distance of women rights and politics, 165 years after Seneca Falls, a few months after sending Martha Karau to a pre-mature political menopause!https://www.kenya-today.com/opinion/diana-kethi-kilonzo-women-in-leadership-kenya

Dikembe Disembe is a commentator on socio-political issues and currently on academic exchange programme at Miami University, USA.