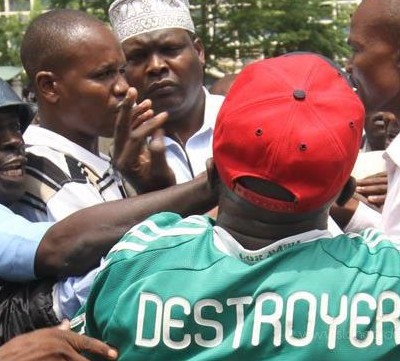 Phillip Ochieng’s column in yesterday’s Sunday Nation was a good read except for one little matter ~ the assumption that any rowdy young man in a Gor Mahia replica jersey roughing up Miguna Miguna must be doing so at the instigation or behest of the ODM, the Prime Minister or his supporters. Any magician will tell you that if you follow the obvious movement of his hand, he is guaranteed to fool you. In the case of the violent reception that Miguna Miguna received in Mombasa, if we ignore the magician’s hand, we’ll notice more than a few oddities. Let us dwell on just one ~ ‘the Destroyer’.

First, the name ‘Destroyer’ across the back of any football jersey – even by Gor Mahia standards – is rather curious. I have seen more than a few odd names ~ including one AFC Leopards jersey that read “Muliro Garden Branch” – but i still find ‘Destroyer’ a bit out of the way. It costs more time and money to customize a team replica jersey. This makes it difficult to understand how anyone would go through the trouble with the intention of portraying oneself as a ‘Destroyer’. Unless that Jersey was ordered specifically for the mayhem that was unleashed on Miguna, the math just don’t add up.

The choice of a Gor Mahia jersey is quite telling. It is possible that an Orange ODM T-Shirt was the first option considered, but the magician figured that this would be too obvious. After all, wouldn’t a Gor Mahia jersey project ‘Destroyer’s intended ethnicity much more clearly than an Orange ODM T-Shirt would? This ‘De-masking’ of Miguna in Mombasa bears all the hallmarks of a stage managed skit that is an amateurish attempt to enhance and perpetuate a particular ethnic stereotype.

Matthew Iteere says that they do not arrest criminals because the Police Force is under resourced. However he does not explain if they need a forensic lab to nab a ‘Destroyer’ who is so clearly labeled ~ in capital letters, no less. Crystal clear images of Destroyer and Co. going about their destructive errand were beamed to every TV screen ~ including Matthew Iteere’s i would presume ~ more than enough times for anyone that is not blind, to register the facial and physical features of the members of ‘the Destruction Squad’. The Mombasa Police even have a full fledged dog unit at Mishomoroni with canines that could assist in sniffing out ‘Destroyer’ if he changed the jersey.

Speaking of dogs, don’t they say that the easiest way to determine the owner of a dog is to kick the damn mongrel? Whose dog is ‘Destroyer’ really? The political hue that Mr. Iteere is most likely to wear when making the ‘to arrest or not’ decision tends towards the PNU. Both the Minister for Internal Security and Justice are as PNU as they come, and yet, ‘Destroyer’ continues to roam the streets of Mombasa without as much as a text message from the cops. Isn’t that a wee bit suspicious? It is instructive to note too that the only person who seems eager to have ‘the Destroyer’ brought to book is one Jakoyo Midiwo, ODM’s Chief Whip. The rest of the commentators are focused on telling the PM to tame his violent supporters or to ‘come out strongly’ in condemnation of ‘Operation Run baby Run’.