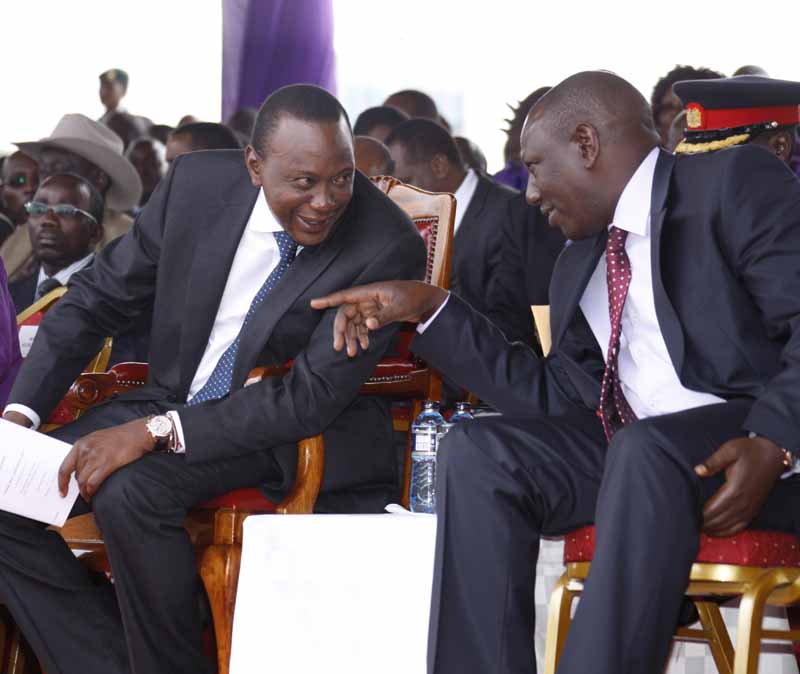 The agenda is to persistently use propaganda to cover-up corruption, SANCTIONS and plot to kill devolution

The Uhuruto government that came to power in a wave of fake promises which Kenyans rejected but were declared “validly elected” anyway under unquestionable circumstances is in a state of limbo. With major donors having pulled out, the government is slowly being bled. And this I predicted in a major essay before the last elections.

To assuage the souls of the West and make amends, former Safaricom CEO Michael Joseph and Former General Motors East Africa CEO Bill Lay were given plum government positions. This was in an effort to woo back the West to demonstrate that they aren’t racist after their wreck-less speeches like the Mugabeisqe one Uhuru ranted in Addis Ababa.

Since then, the purse strings of the West have been getting tighter. And with American companies moving back to the US recent studies showed that the American worker, even though more expensive, had a productivity level commensurate with his/her cost of labor. Plus the cost of production in China has been going up due to increasing standards of living which mean higher wages. This realization is also why the bigoted digital duo have kept off the antigay rhetoric like Museveni but have even appointed Binyavanga Wainaina-a globally self declared super GAY as presidential advisor.

The Kenyan economy is now hanging on a thread, any slight disruption would initiate a cataclysmic chain of events that would bury the Kenyan economy. And so to divert attention from themselves, the Jubilee govt is blaming devolution for the economic mess.

We have in office folks who like Uhuru Kenyatta were melons. Uhuru only supported the progressive 2010 constitution which guaranteed devolution after being warned of dire consequences by then president Mwai Kibaki who was then Muthamaki in his tribal backyard of Mt. Kenya, a mantle that Uhuru so desperately needed to bargain within the Kikuyu-Kalenjin alliance – Jubilee alliance.

That these folks are out to execute their long-held dream of killing devolution is an open secret. William Ruto was recently quoted threatening that the Marsabit county government risked being suspended in the interest of National Security.
So, this is a government that fails to do its job, but then blames the governors when there is insecurity in their backyards. Ruto’s rogue tongue lashing was bizarre because security is apparently a domain of the national government not County governments.

With prices of commodities on their way up, and Kenyans increasingly disillusioned, these folks are only buying time, which apparently is fast running out. They know they risk being kicked out, but as is their element, they wonâ€™t agree to go down alone. They want to go down with the whole system of devolved government.

In 2010, Ruto wanted 14 devolved governments but in reality Ruto is afraid that devolution follows lines of demarcation that leaves Kalenjins risking disintegration along sub-tribe lines especially if nonRutoholic governors like Isaac get to perform better and gain massive following.

That is that with price of commodities ever growing unabated, The Jubilee job approval ratings according to Ipsos-Synovate is at an all time rock bottom. And it appears to be on a free fall every time a new survey comes out. They recently threatened to de-register Ipsos for publishing truthful surveys.

In an attempt to reverse this massive free fall in popularity, the desperate duo has resorted to playing populist politics by doing a few things. One they decided to reduce their salaries by 20%. These folks donâ€™t even need a salary in the first place. All their expenses including their families’ are paid for by the state. So if Uhuru has been earning 3m over the last 12 months, his account has grown by a whooping 36 million shillings of money that he doesn’t need….enough to feed 30 million Kenyans who live on less than a dollar a day.

With all cards exhausted, the Jubillee govt is just buying time. However you cannot hide incompetency indefinitely.. Ipsos Synovate says 70% of Kenyans are disillusioned. Folks that’s 30 million out of Forty million disillusioned. Very soon as predicted, Kenya will have its own Greece moment.

Kenyans will pour into the streets demanding higher wages to match the ever growing price of commodities. And these price increases began during Uhuru’s tenure at the Treasury where his voodoo economics or Vodka Economics resulted in massive increase in prices of commodities. Kenya is now a Kadogo economy. Kimbo in sachets has catapulted Bidco’s Shah into one of Africa’s richest man. The King of Kadogo products has seen the sales of sachet packs grow under Jubilee. 2kg packs of Unga and Mafuta are expiring on shelves because that market is dying away as the masses canâ€™t afford.

The truth is that even as Kenyans wallow in poverty and continue to suffer, the Jubilee top honchos are unapologetic, and continue to mobilize entire government machinery in their trips abroad. Ruto was reported to be escorted in a motorcade that cost hundreds of millions of taxpayer money in Netherlands, replete with a hired outrider after the dutch government refused to treat him like a State visitor, because whenever he goes to the Hague, he is on a personal visit, not official.

If they were serious about reducing the wage bill why would they appoint numerous and useless advisers like clueless Kuttuny earning millions? Why are they creating unnecessary offices like that of Mrs Wamalwa? So yet again Kenyans are being played broad daylight.

The propaganda of wage bill is also meant to lead to a referendum to mutilate the katiba they opposed in 2010. And devolution they may kill by rigging the referendum. Meanwhile Kenyans will continue to suffer even more as programs like Mutua’s Machakos City, Awiti’s Homabay Agricity, Isaac Ruto Bomet Dairy farming revival program will all be dismantled as devolution gets killed.