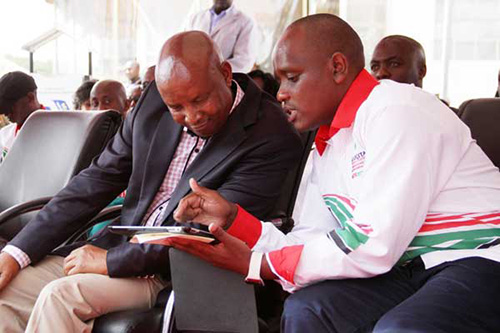 The tested dictum in the Jubilee Alliance political playbook has been; ‘if you want to kill a dog, first give it a bad name’.

Under Itumbi’s watch, or orchestration, leading politicians in the opposition found themselves becoming objects of opprobrium on the blogosphere. Itumbi, assisted by the ‘evil axis’ of Moses Kuria and David Matsanga, has made President Uhuru’s presidency one of the most vindictive and divisive as compared to Mwai Kibaki’s 10 years.

The finer versions of the Jubilee hogwash, meant for the educated middle class, is left for Eric Ng’eno to dish out in Daily Nation.

Perhaps, the greatest undoing of Itumbi was in picking his political battles. Mr Itumbi fought hard anyone, including the country’s top political heavyweights – Â he deemed he could respond to. At the acme of his idiocy, last year, he uncharacteristically took on CORD leader Raila Odinga.

Back then, while on a visit in Dallas, USA, the former Prime Minister had suggested to President Uhuru that by appointing Itumbi as the Director of Diaspora Affairs, the Jubilee government had relegated an important economic constituency of the country to the periphery of government functions.

Itumbi hit back. He even listed the services of Bogonko Bosire who was then still ‘present’. Writing on the now neglected pro-government tabloid Jackal News, Itumbi told the former PM that he and his team will “show you what can be done to transform relations, involve Kenyans living abroad in Gvt. Policy, champion for employment of Kenyans abroad as we create jobs for those in Kenya and ease the processes for investment and renewing of documents by creating a working One stop shop and many other interventions”.

In Mr Odinga’s mind, I suppose, the CORD leader denigrated Mr. Itumbi on account of his (Itumbi’s) inability to live beyond social media and make the needed contacts in the diaspora to spur the kind of investments Kenyans abroad were bringing back home.

A year later, Itumbi failed squarely on the Diaspora front. At a meeting with President Uhuru in Brussels, Kenyans openly told the president that his handling of diaspora matters were wanting.

Itumbi would take the blame, then blame ‘slow execution’ of his ‘ideas and planning’ as what failed his dream entry into diaspora matters.

“On the Diaspora front, it must be said from the depth of my heart and mind, we did not do a good job in 2013. The ideas and planning were superb, but the execution has been slow and the impact dismal. There are many reasons, but instead of naming them for now, I take the blame”.

Last week, unnoticed by many Kenyans, the whole Diaspora function was finally taken away from Itumbi. Another Kenyan (a Mt Kenya son of course), MrÂ Zachary Dominic Muburi-Muita, was appointed to the Directorate of Diaspora Affairs. In fact, the whole Diaspora ‘docket’ was moved from the Presidency to the Ministry of Foreign Affairs. Itumbi lost one package of his job description. Raila Odinga was again proven right in his judgement!

But before this, Itumbi tore into Raila’s concerns in the usual mannerÂ of Jubilee belligerence. He told off Raila, reminding him that while he was PM the ‘diaspora’ docket in his office had nothing much to show.

As many other tell-tale propaganda that Itumbi and axis has succeeded in spurning on the person of the former Prime Minister, Itumbi failed to note that had it not been for Odinga’s diaspora links, the Jubilee government’s signature project – Standard Gauge Railway – would not have seen the light of day.

Be that as it may, the question now is: who wants Itumbi out?

Talk of the security agency’s discomfort with Itumbi first appearedÂ late last year when he posted that he had been ‘tweeting’ the Somali war on terror from Nairobi under the account of KDF spokesperson Major Emmanuel Chirchir. He had to delete the post.

More recently, the President’s Facebook page had to delete a post about the appointment of Dr. Githinji to replace Kiplimo Rugut after Kenyans openly mocked Uhuru over tribalism. Itumbi is the man charged with ‘digital media’.

The security apparatus, Itumbi had revealed, was weary of ‘digitalising’ the Presidency. Who is fighting back? And, why?

The leakage of his disreputable academic history, including fake credentials and leading a gang of 50 students-cum-extortionists (who forced Kenya Institute of Mass Communication to award them diplomas even though they were admitted to study certificate courses) can be seen within a systematic and deliberate ploy to remove the man as far away from the presidency as possible.

First it was rumoured he was moved from State House to Harambee House. Meaning, the workplace prestige of loading the bureaucracy from the lawns of State House was cut off. Then they took away part of his job description (Diaspora Affairs), and now the NIS – the heart of the Jubilee Alliance government – colluded with reporters at another pro-establishment media firm, Nation Media Group, to publicly ridicule his academic endeavours!

Who is bringing Itumbi down? Of course not my party leader Raila Amollo Odinga and not the most honourable Stephen Kalonzo Musyoka!