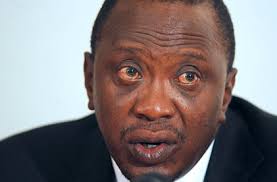 The last ten days have proven to be the worst for the Jubilee Alliance campaign team. It started with Taveta residents calling a bluff on the Public Health Minister Hon. Beth Mugoâ€™s empty land promise to the squatters. Local leaders accused her of hoodwinking squatters in exchange for votes just like in 2002 when the Kenyatta family made a similar promise that has not been kept to date.

Last weekâ€™s campaigns in Kwale County saw residents boycott the Jubilee rallies despite massive mobilization with cash incentives; only a few thousands attended the rallies. The bone of contention between Uhuru and Kwale residents is the historical injustices relating to the beach front prime properties.

The Coastal residents are convinced that since Uhuru is a beneficiary of land related injustices, he will not effectively deal with the matter once elected as president since he is an interested party.

The Jubilee Alliance team was forced to cancel a rally that had been scheduled for Wundanyi in Taita Taveta County; ground intelligence warned that the crowd could be hostile to Uhuru, a fact were it to happen could have caused him national embarrassment. The Jubilee team had to organize an impromptu rally in Malindi.

Had Jubilee gone ahead with the Wundanyi rally it would have been injurious to their campaign momentum, sending a very strong negative signal to the rest of Kenya that Jubilee Alliance was just Impunity reloaded with tribal support. It was good damage control to arrange a make shift rally in Malindi which did not escape Kenyans on social media who forced it to be made a news item.

Far away from the Coast, things were getting elephant in Kisii, Simeon Nyachae was reluctant to endorse Uhuru for the simple reason that the locals were solidly in CORD, though Nyachaeâ€™s interests were best represented by Uhuru. The Uhuru team had earlier been forced to withdraw campaign vehicles from Kisii.

It took the intervention of Nyachaeâ€™s third wife Grace (who hails from Nyeri) and Mama Ngina Kenyatta to convince the reluctant Mzee currently enjoying his retirement to openly state his preferred candidate.

Nyachae with vast tracks of Land just like the Kenyatta family had to support Uhuru, after all he is a candidate of the rich landlords and Nyachae is no exception to this.

In Kisii and Nyamira, ground intelligence had advised Jubilee that nothing much had changed since the January jubilee rallies in the area that saw William Ruto and Sam Ongeri Â booed. The locals were not happy with Uhuru Kenyattaâ€™s treatment of local IDPs who only got Kshs.10,000 in 2012 with no option for resettlement compared to the Kikuyu IDPs who got Kshs.35,000 plus alternative land for resettlement. This to the Kisii was an insult and open discrimination.

The rallies in Kisii were poorly attended despite millions that was spent in mobilizing the locals. It was evident even in the news bulletins that the small Gusii municipal stadium did not have a crowd to fill even with the presence of Nyachae. Jubilee team finally came to terms with the unfortunate reality that Kisii is not a swing vote but a CORD zone and it will be hard to get more than 15% of the votes.

As Uhuru was facing a hostile crowd in Kisii, William Ruto was at the Coast trying to woo locals after it emerged that Uhuru had been declared a persona non grata by Kaya elders, hence the poor turnout in the jubilee rallies. Ruto however even with his charm offensive could do little to nail any significant support. The Coast trip was a total flop.

As if Kisii and Coast rebellion was not enough, the Jubilee campaigns in the Central Rift showed signs of a slow puncture when Ruto was openly heckled in Kuresoi- Nakuru and Kabartonjo in Baringo. Ruto faced an open rebellion with locals defying his plea of a six piece suit pattern of voting. The URP and Jubilee nominees are now ranked pari passu with those of CORD and other parties like KANU in the region.

Rift Valley is not a jubilee guaranteed zone as Mutahi Ngunyi may have wanted Kenyans to believe, it emerges that retired president Moi still holds some influence in the region with his last born son Gideon guaranteed to clinch the Baringo senate seat. Rumors doing rounds in Rift Valley is that Retired President is silently encouraging people to vote for CORD after realizing that Musalia Mudavadi may not garner more than 200,000 votes nationally.

As Uhuru faced frustration at the Coast (low turnout at Jubilee rallies despite mass mobilization) Raila Odinga was registering success into the swing vote counties of Tharaka and Meru. Railaâ€™s promise to resolve the ban of miraa export to Netherlands seems to have resonated well with the locals majority of whom support Kiraitu Murungis APK (Mbus) party which does not have a presidential candidate.

Uhuru mistreatment of Kiaratuâ€™s Mbus has come to haunt him; Kiraitu has maintained that the Ameru are free to elect whoever they think represents their interests well. The CORD success in Meru dictated that something had to be done to slow Odingaâ€™s momentum and that is why TNA extremists quickly organized the heckling of CORD team in Embu.

This week also saw Odinga making grand forays into the Rift Valley, his rallies were massively attended than was expected. Of significance were the CORD rallies in Nandi and Bomet, these are said to have got Jubilee to think of an alternative strategy to lock down the region.

The Rift Valley success continued to Turkana and the climax was in West Pokot where Odinga received a rapturous welcome. The Pokot are known to go against the grain in Kalejin politics, that is how Hon. Samuel Poghisio won in 2007 on Wiper Democratic party despite the region massively voting for Railaâ€™s ODM.

The Marakwet have made it clear that they donâ€™t necessarily follow other Kalenjin in voting patterns and that is how Linah Jebii Kilimo got into parliament on another party than ODM in 2007.

Jubileeâ€™s support is now limited to Central province and parts of Rift Valley and Nairobi. Â Attention has been drawn to Jubilee that swing regions are tilting towards CORD. Rift Valley is now a confirmed tossup, this is what is causing the adrenaline rush among jubilee and perhaps explains the panic and the unorthodox strategies of unleashing Mungiki threats and use of state machinery â€“ provincial administration and the NSIS.