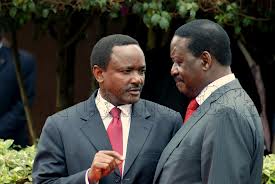 Raila Odingaâ€™s long time buddy, the late Steve Jobs would have been excited to give a name to the Railonzo-Weta alliance.

There is no doubt that looking at his nomenclature of products and concepts-iPad, iPhone, iPod etc; Steve Jobs who was fond of giving Jakom samples of his prototype devices way in advance before they were released into the market would have gladly christened the Railonzo alliance iCord.

I watched with nostalgia the signing ceremony of the so called Railonzo pact which was graced by a sea of humanity reminiscent of the 2005 referendum victory rally.

Comprising Orange, Ford-K and 11 political parties, iCord is indeed the coalescence of all the Kenyan dreams, hopes and aspirations since the introduction of multiparty democracy.

Bringing together the Prime Minister and the Vice President of Kenya, guarantees stability and reassures the markets and potential investors.

It reinvigorates our nationhood more than any other time in the last decade. It renews the hopes, dreams and aspirations of Kenyans.

Analysts believed that the Railonzo duo was a winning combination in 2007, and I personally believe that itâ€™s even a bigger winning coalition now.

Anytime I look at a line-up, I am asking myself, what do they bring into the table as a team?

The Railonzo-Weta trio brings into the Accord I call iCORD a sense of maturity and national image that this country badly needs at this point in our nationâ€™s reconciliation journey. It heals old wounds.

For a nation at war with terror, iCORD seals a national pact towards unity, stability and reconciliation.

Their style and approach might be different, but in Raila and Kalonzo Â I see a confluence of ideology, vision, mission and conviction as to the direction that this great nation should take.

I see two leaders who see a sense of urgency, two individuals who have tasted power, and have been humbled by it.

They have both been at the pinnacle of power, and at times watched their political constituencies almost crumble, due to human decisions that I believe they have learned from. No 2 individuals in Kenyaâ€™s political environment have learned from hindsight like the Railonzo duo.

The last decade could as well be summarized as the decade of the â€œEducation of the Railonzo duoâ€. I have no doubt that the last decade has effectively prepared and humbled these 2 founders and carriers of the digital iCORD banner for the mechanics of leadership as Kenya embarks onto the exponential phase of the march towards vision 2030.

It is now obvious that while the Uhuruto duo is playing a game of quantity, the Railonzo pact brings to Kenyaâ€™s 2013 political stable a quality driven alliance building process. Numbers is what made Jubilee mistreat Mudavadi and Eugene.

iCord is the game that says that it isnâ€™t about what arithmetic effect you have, but what credentials, patriotism and track record you bring to the table.

Cord, like Raila says, values you, however small like a safari ant you may be. This is the quality driven open arms approach that will culminate in a landslide victory for CORD. All Raila and Kalonzo are asking for is love for country not numbers.

Itâ€™s the same philosophy that made Obama settle on Joe Biden and overlooked Hillary Clinton- who though controlled a much larger constituency than Biden would have brought numbers, but alienated a large swathe of the nation.

Uhuru has mis-calculatedly decided to follow the script of recent US Presidential Election losers. What a Ruto pick does to the Uhuru ticket is the damage Paul Ryan and Sarah Palin did to the Romney and John McCain tickets respectively, it locks him in to just 2 regions- North Rift and Central. Â It denies his coalition growth and national image.

For a choice of an election line up, you are looking at not just numbers, but also how disciplined and loyal the eventual team would be to the joint objectives that the final Coalition would have. You are asking yourself, how they can gel into a formidable team like the iCORD line-up.

Going by the Jubilee wrangles, exit of Mudavadi, UDF, and Eugene and so on, Jubilee seems to be a sinking ship.

And the recent desperate Uhuru-Ruto dalliance with Mudavadi seems to be borne out of the realization or is it frustration that the iCORD Alliance is unbeatable especially given the sea of humanity that graced the digital signing ceremony and the Uhuru Park rally.

Then you have the element of institutional memory. The Railonzo pact brings together Raila and Kalonzo who have previously worked together, and hence are 2 â€œdevilsâ€ that understand each other well. They know the buttons that upset the other.

The idea of 2 people understanding each other is why Kibaki- Raila second coalition agreement has worked so harmoniously than the first one.

It is the same reason that the Jubilee alliance cannot hold together due to poor leadership and has been dragged down by wrangles days on end. It seems headed for a total collapse before Election Day.

Uhuru and Ruto have simmering internal differences that are just being swept under the carpet as evidenced by recent comments by Jebii Kilimo and other TNA aspirants in RV being frustrated by URP.Â  Jubilee has its head buried under the sand. It will soon implode like dynamite.

The Railonzo duo have dueled over the last 5 years, and have come to the realization that the bonds of patriotism that now brings them together are much stronger than the walls of suspicions that separated them.

The Digital iCord government here we come. And on March 4th, the way shall be cleared for the Railonzo-Weta trio to be sworn in- in broad day light,in full view of the public. Â And behold a Kenyan and Pan African Rennaissance shall begin!