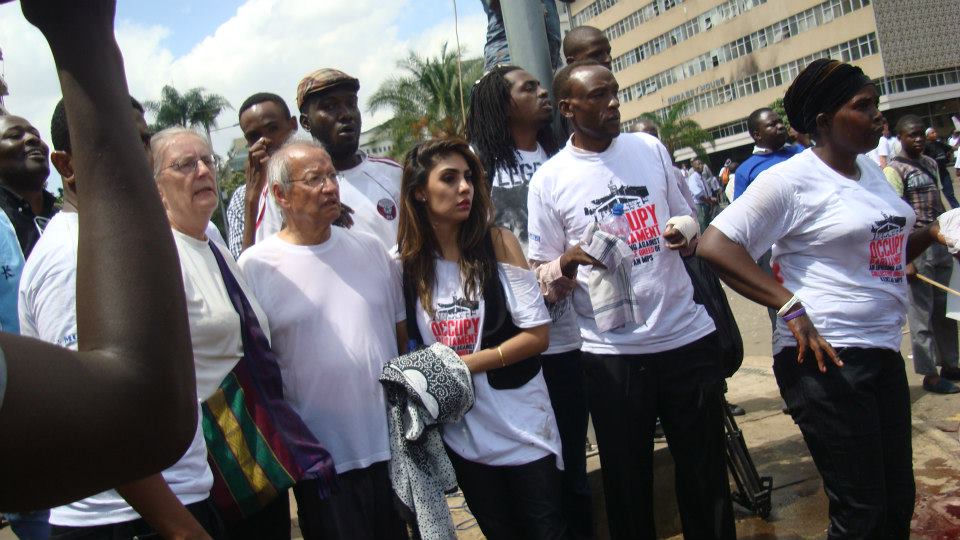 By: Patrick Gathara via Gathara’s world

Back To The Future

Every once in a while, just when you think you’ve figured them out, Kenyans can give you the most bloody awful kick up the backside. Yesterday was one of those days. And it was a bloody awfully welcome kick.Those who’ve been following this blog over the lastÂ few months will have been treated to fulminations on the fear and apathy of our nation in the face of monumental iniquity by those in government. I have held forth and pontificated on the myopia, incompetence and laziness of our journalists and the demise of our civil society. I believe much of that still to be true. However, on the streets of Nairobi, I think we may have witnessed the stirrings of a nation starting to awaken from a deep slumber.For over ten years now, our famously greedy parliamentarians have been used to hiking their pay at will, and ignoring the loud protests made in press conferences held in five-star hotels. No more. Today the fight was moved away from sanitized conference rooms and back into the streets where we had taught the KANU government a thing or two about people power 2 decades ago. And that fact is more significant than a straightforward struggle over MP salaries.

Yesterday was all about going back to the future. It was exciting to see the campaigners old mixing it up with the new upstarts. Having lived through the mass action of the 90s, to see Rev. Timothy Njoya, Maina Kiai, Davinder Lamba and Yash Pal Ghai once more marching through the streets of Nairobi Â in support of a new generation of activists led by the likes of Boniface Mwangi and Okiya Omtata brought a lump to my throat. After Boniface shamed us on Labour Day, here was the old guard stepping in to teach the new dog some old tricks of the trade. But the young puppy showed that he too had some aces up his sleeve.

There were also glimpses of the old alliances that had been so effective in pushing the reform agenda. Churchmen, activists and, belatedly, media. Even the police seemed determined to recreate the nineties atmosphere, charging at the unarmed and peaceful protesters with their rungus and tear gas and water cannon.

There are, however, crucial differences. This was not a mass protest against the government. It was, in fact, just a few hundred demonstrators were advocating the government line against an intransigent Parliament. Secondly, one of the main pillars of that old alliance was missing -the opportunistic opposition politicians. It is they in the 90s who mobilized the people. Many, however, have since either been co-opted into the lootocracy or are still licking their wounds following defeat at the polls. Further, we were not fighting to get a new constitution, but to defend the new one we have from gerrymandering MPigs.

Still, the moment was significant. For the first time since the election, a group of people publicly and loudly refused to “accept and move on.” For once, they refused the logic that it was better to keep the peace even when they were being screwed. They drew a line in the tarmac and stood by it. The moment was also significant because for once, the government let its mask of civility slip. The reaction we saw on TV was far removed from the polished and rehearsed State House presentations. It was the raw brutality that lies behind that facade. This was a government unleashed from the strictures imposed by media consultants intent on winning elections.

With a core of determined, bloodied but now blooded, activists and government that may have overplayed its hand, the scene my be set for a rather quick end to the Uhuru’s administration’s honeymoon. Of course, there is still some ways to go. The people still need to be won over. Those who voted for President Uhuru will need to be convinced that they can hold the government to account without betraying their communities or being humiliated. Those who didn’t, and particularly those who weren’t entirely convinced that he won fairly, will also need to be convinced that continuing to participate in the process is still worth it.

The activists will need to make allies out of progressive politicians both within and without the legislature. To do so the activists must begin to articulate an agenda, one that might conceivably form a platform for a future electoral run. Finally, they will need to partner with the media. Here, they will be faced with persons just like themselves, newbies with limited experience of the 90s struggle and whose careers have been made in a relatively open era for the press. Most journalists today seem inclined, strange as it may seem, to give officialdom the benefit of the doubt, to be wowed by its propaganda. They will need to be shown the bigger picture, pointed in certain directions, brought up to speed on the issues and pressed into digging deeper.

All that will take time. In the meantime, if yesterday’s protest proves to inaugurate a season of more intense questioning of official conduct and policy, then the protesters will have achieved a much greater victory than simply expressing public displeasure at the thieving ways of legislators. They will have given the nation the beginnings of a real voice and a real boot. If I were Uhuru, I’d be watching my backside.