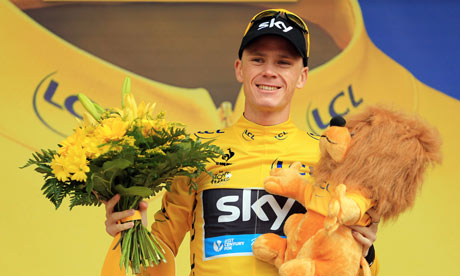 British cyclist on cusp of winning Tour de France has come a long way since his days riding with the Safari Simbas in Africa
By William Fotheringham for The Guardian, Friday 19 July 2013 17.41 BST

For Bradley Wiggins last year, read Chris Froome in 2013. This is the second year in succession that a Briton has dominated the Tour de France, both members of the same team, the black-clad Team Sky. But there the resemblance ends.

Wiggins could hardly be more British, with his mutton-chop sideburns, a love of all things Mod, and his penchant for self-deprecating backchat. Froome is self-effacing, polite to a fault â€“ it is impossible to imagine him producing the rant laced with four-letter words that was a low point of Wiggins’s Tour win â€“ and, although his passport is British, his background is African.

But tomorrow, all being well, Froome will follow Wiggins on to the top step of the podium in Paris to win the biggest prize in cycling.

Born in Kenya, Froome was educated in South Africa from the age of 14. He started mountain biking to get out of the house. Initially he rode with a group called the Safari Simbas, run by a dreadlocked Kenyan called David Kinjah, to whom Froome still donates spare kit. To begin with, Kinjah recalled, young Froome rode an old road bike borrowed from one of his teachers; he could hardly reach the pedals.

Kinjah noted that young Froome was overambitious for his age and physical qualities, and that he would drive himself so hard at times in races that he would faint. He told the magazine Cycle Sport: “He’s thin and strong, but too long for a real climber. A real sprinter he never will be. But the longer the race, the stronger Chris gets.”

Froome’s first sight of the Tour was on television aged 17 at boarding school when he watched Lance Armstrong and Ivan Basso doing battle. After being talent spotted from the small-time Konica-Minolta team to join the slightly larger Barloworld team, their Italian manager Claudio Corti came to the same conclusion as Kinjah: Froome could figure well in long stage races such as the Tour de France.

Something similar struck his current manager Dave Brailsford at the Commonwealth Games in Melbourne in 2006. Froome was a one-man Kenyan team, doing it all for himself in the same way that he had made himself a Kenyan national champion’s jersey. “He looked after himself, came to the team managers’ meeting, turned up in his sandshoes and he performed really well,” recalled Brailsford.

Brailsford and Froome’s paths crossed next at the world championships in Salzburg that year, after the youngster had hacked into the Hotmail account of the Kenyan cycling association to get his race entry in.

Froome recalled that he took four buses and walked two kilometres to his lodgings, then got lost in the rain on his way to the manager’s meeting because his map had fallen apart in the rain. “It was raining, he shuffled into the back of the room, pissing wet through because he’d ridden to the meeting for himself,” recalled Brailsford, who sums up: “If you’re that committed and you’re determined enough to do those type of things, translating that into a winning mentality isn’t difficult.”

By 2011, however, Froome’s days as a professional cyclist seemed to be numbered: he had struggled to achieve consistent results in his season and a half at Sky. But it was then that he was diagnosed with the parasitic disease bilharzia, otherwise known as schistosomiasis, which is transmitted by water snails and has been described as second only to malaria in its debilitating effects.

Froome has described the parasite as “[feeding] on your red blood cells, so for an endurance athlete it’s basically doing the opposite of what [performance-enhancing drug] EPO does. It was a nightmare.”

He is not entirely cured â€“ more traces of the parasite were found in his blood earlier this year â€“ but the disease can be treated. His trainer Tim Kerrison says that the main difference in Froome after the diagnosis has been simply that he can train and race more consistently.

As for what this year’s Tour winner is like away from the bike, he gives less of himself away than Wiggins. The British cyclist David Millar, currently riding in the Tour with Team Garmin, describes Froome as the archetype of the perfect Team Sky rider: “To be good at Sky, you need to be 25 years old, have no wife and child and dedicate yourself body and soul to your profession. That’s how Chris is. He’s the opposite of Wiggins, whose head has fallen off â€“ he’s a straightforward character, who accepts discipline and knows how to control his emotions.”

“He was well brought up, but a bit quiet, a bit withdrawn,” says Corti. He is known for enjoying spear fishing near his Monaco home, and he has an exotic past: his former amateur team manager recalls him as a young man with long, straggly hair, fluent in Swahili, driving “a wreck of a car”, studying for his masters at races, wearing “more bangles than a girl and clothing made of hemp.”

Froome is the opposite of Wiggins in another way, coming from a non-cycling family background and from a country with few links to the road cycling tradition. The Welshman Geraint Thomas, a Barloworld colleague, who now rides for Sky, too, said: “His personality hasn’t changed. He’s still a bit clueless when it comes to knowing the other riders and so on. Compared to Brad, I’d say Brad wears his heart on his sleeve. If Brad has a bad day you can definitely tell. I haven’t had a bad day with Chris yet.”