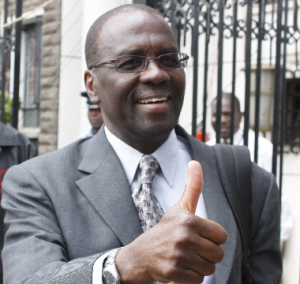 Appreciating a Comrade and a Mentor

By Onyango Oloo via http://demokrasia-kenya.blogspot.nl

Â It has been exactly one week since that stunning 6-0 verdict by the Supreme Court sealed the ascendancy of Uhuru Kenya to the apex of the Kenyan neo-colonial state.
At the time that the five minute shocker was beamed to millions of people across East and Central Africa and streamed onlineÂ  to tens of thousands more around the world I was among the hundreds of people huddled over and clutching our various gadgets-lap tops, digital cameras, recorders -in the adjacent Media Centre.Â  I had been reflecting on the ramifications of this ruling all day, ever since I had arrived at the precincts opposite the Reinsurance Plaza at around 8:30 am.Â  Immediately the green robed lords and her ladyship made a hasty exit from the court after delivering that collective slap on the Kenyan people, I started pounding away at my keyboard giving birth and delivering my upcoming blog almost instantaneously making some cyberskeptics, questioning the alacrity with which I churnedÂ  out the essay, whether I had the digital on tap all along.Â  Nothing could have prepared me and most Kenyans in my progressive circles to prepare for that unlikely denouement to what was no doubt a gripping post-election judicial soap opera.
Even now most of patriotic and democratic Kenya is still in denial not unlike those unfortunate road accident casualties who keep congratulate themselves for surviving the grisly head on crash-not realizing that the head they are speaking from was decapitated from their torsos and that they are muttering their dying words.
Inspired by that national sense of betrayal and the subsequent, persistent denial of the reality and ramifications of that Supreme Court decision, there is a crescendo of rumours and speculations imbued with a mixture of anger, fear, hope and anguish.
In the classic Kenyan tradition, every urban legend, trope, tall tale and rumour is by definition always â€œCONFIRMEDâ€ and â€œVERIFIEDâ€ by allegedly IMPECCABLE sources- whether these areÂ  touted to be the Supreme Court Justices themselves,Â  State House insiders, CORD strategists or evenÂ  Jubilee moles.
Here is a sample of the sizzling stories doing the rounds in Nairobi and elsewhere in this conflicted and tortured republic:

1.Â Â Â Â Â Â  â€œThe decision was scripted by the NSIS and thrust to the Chief Justice to read at gun pointâ€;
2.Â Â Â Â Â Â  â€œKibaki had already handed power to the military top brass a week earlier and the generals had vowed never to serve underÂ  Raila Odinga who had once attempted a coup de tatâ€;
3.Â Â Â Â Â Â  â€œEach of the Supreme Court judges was given one billion shillings to rule in Uhuruâ€™s favour.Â  In fact, Justice Wanjala arrived at his residence around 8:30-9:00 pm to find four men waiting for him in his living room. One of themÂ  opened aÂ  huge suitcase stuffed with crisp 1,000 shillings and terselyÂ  instructed him to do what he knew was right for our beloved motherlandâ€;
4.Â Â Â Â Â Â  â€œDr. Willy Mutunga called the Prime Minister and spoke to him for over 40 minutes explaining to the CORD flag bearer Â how the forces of impunity had held him hostage; Raila understood the dilemma his friend and comrade was grappling withâ€;
5.Â Â Â Â Â Â  â€œThe judges were split 3-3 (with Willy, Smokinâ€™ and Ibrahim on one side). They opted to projectÂ  a united front as the Supreme Court, hence the 6-0 unanimous announcementâ€;
6.Â Â Â Â Â Â  â€œObama, Cameron and Merkel had themselves urged Kenyan civil society juggernauts like GladwellÂ  Otieno, Maina Kiai, Muthoni Wanyeki and John Githongo not to worry about Uhuru becoming President because within two months the ICC duo would be securely locked up at the Hagueâ€;
7.Â Â Â Â Â Â  Etc. etc. etc.;

Is there ANY truth to the above rumours?
SOME truth?
Completely baseless fabrications?
Who knows?
Kenya is a weird and surreal territory. Some of the giddiest and wildest urban legends often turn out to have more than a kernel of truth.
On the other hand, perhaps the TRUTH is in fact, STRANGER THAN FICTION. Perhaps we Kenyans should treat as LITERAL, this verbatim rendition from the Supreme Court:

To tens of millions of Kenyans (including many who DID NOT VOTE AT ALL) the above words still ring hollow and contrived.
That is why half of the country is shuffling its feet, shrugging its collective shoulders and sighing heavily, muttering:
â€œOK, letâ€™s wait for that detailed written ruling that they promised to furnish us with in two weeks.â€
To give an inkling of what most progressive and democratic minded Kenyans are thinking at the moment, contemplate thisÂ  Open Letter to Chief Justice Dr. Willy Mutunga, penned by Gideon Wafula and carried in the April 4,2013 issue of the online PambazukaÂ  and also https://www.kenya-today.com/opinion/supreme-court-of-kenya-willy-mutunga-cj social justice newsletter which reaches millions around the world: