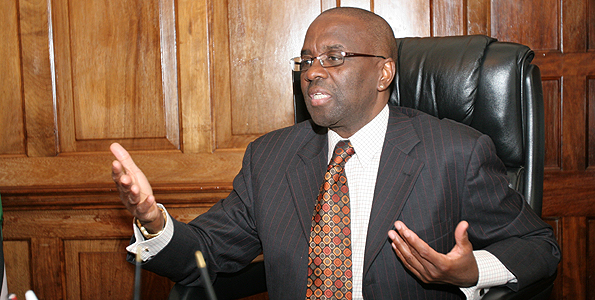 Chief Justice Dr. Willy Mutunga says he has been threatened with “dire consequences” if the courts barred presidential candidate Uhuru Kenyatta from contesting next month’s election.
Dr. Mutunga in a televised press conference said he had received a “poison-pen letter” allegedly sent by Mungiki- an outlawed group “extolling” violence.

Dr Mutunga revealed that the Head of Public Service Francis Kimemia attempted to block him from travelling outside the country and described it as politically motivated and an emerging trend of intimidating judges as the country heads to an election.
The revelations by Dr Mutunga comes less than a week after Prime Minister Â Raila Odingaâ€™s presidential campaign team alleged that top state officials including the chief of Intelligence Service Michael Gichangi, Chief of General Staff Gen. Julius Karangi and Head of Public Service Francis Kimemia were involved in a scheme to rig the March 4th general election in favour of Jubilee Alliance candidate Uhuru Kenyatta.

â€œThere are dots to be connected; the BBC aired a documentary in which it was revealed that some ICC prosecution witnesses have been wiped out, Kimemia rigging allegations, use of Mungiki to threaten judicial officers et el are indicators that all is not wellâ€ Rashid Wanjala a law scholar based in Canada said on a phone interview.
In 2011, former Imenti Central Member of Parliament Hon. Gitobu Imanyara stunned Parliament when he narrated of an ordeal where he was forced to kneel down facing Mt Kenya and ordered to repeat a scripted statement three times that â€œUhuru Tuko Pamojaâ€.

Former Mungiki leader Maina Njenga alleged his life was in danger in 2012 and offered pictures of a well known Kiambu businessman who he said had been sent to kill him, the man was later identified as one of those who were in the delegation to the Hague for ICC trials.

All these events could not just be coincidental!

Below is the full statement by CJ Munga

I have called this press conference to inform the country of two separate but significant events that have occurred in the past one week. I have considered the possible implications of this public statement, but concluded that given the history of this country, such a public disclosure is warranted, necessary, and proper. This statement does not seek to cause alarm but to strengthen the resolve of each and every Kenyan to protect our Constitution, secure our transition, and affirm our future.

On Monday, February 18, 2013, as I was sitting in the Judicial Service Commission interviews for the recruitment of the Deputy Chief Justice, my office received a poison-pen letter from the Mungiki Veterans Group/Kenya Sovereignty Defence Squad. The letter, which was dated Wednesday, February 13, 2013, makes all manner of threats against the Judges, ambassadors and my person. It warns against an adversarial ruling on the Presidential and Deputy Presidential candidacy of Uhuru Kenyatta and William Ruto. The letter extols the violent â€˜exploitsâ€™ of the Mungiki movement and threatens dire consequences.

This letter was posted only a day before my departure to Dar es Salaam, Tanzania, where I had been invited by the Tanzanian Constitution Review Commission to a one-day event to share my thoughts and experiences on Kenya’s constitutional experience. I was stopped at the Jomo Kenyatta International Airport (JKIA) by an Immigration Officer, who insisted that I could not travel because I had not been cleared by Mr. Francis Kimemia, the Permanent Secretary, Head of the Public Service, and Secretary to the Cabinet. I told the official that there is no constitutional, statutory, or policy basis or requirement that provided for the Chief Justice of the Republic to seek clearance to travel from the Head of Civil Service or anybody.

Further, the said Circular that he was invoking to make this illegal demand and decision did not — rightly so — even have the Chief Justice listed among the Public Officials on it. It requires quite some courage, ignorance, or political patronage or a combination of all three for an Immigration officer, on his own motion, to summon the confidence to stop a Chief Justice from traveling, particularly in the face of a nonexistent circular! After much haggling, I did eventually travel. The Immigration Shift Supervisor kept insisting that they were awaiting instructions. However, I still find the insistence on permission from Mr Kimemia bizarre to say the least. Even more baffling was that the Chief Registrar of the Judiciary received a purported â€˜Clearance to travelâ€letter by Mr. Kimemia dated February 14, stating â€˜..it has been noted the Chief Justice is travelling to Dar es Salaam, Tanzaniaâ€™.

Upon landing in Dar es Salaam, I received a telephone call from the Director General of the National Intelligence Service, Major-General Michael Gichangi, apologizing for the ‘small hiccup’ at the airport. I told the DG that a Chief Justice being gratuitously stopped by anybody from traveling cannot fit the definition of a small hiccup, however generous one may want to be. It has never happened on any of my numerous previous trips. I have, therefore, concluded that this is deliberate harassment; and whereas I was keen to have this resolved bureaucratically, I am convinced it is political, and public accountability requires that I make it public.

These two incidents evidence a pattern of emerging harassment against my person, the Office of the Chief Justice, and the Judiciary — especially since no fewer than five (5) Judges have been attacked in the recent past, with some involving gun incidence â€“ as we head into the elections.

I, therefore, wish to state as follows:

1. Kenyans have invested heavily in this country’s democratization, and this investment has resulted in a new Constitution. This Constitution must be protected and guarded jealously. Threats and intimidation of this nature against the Chief Justice, judges, or any other Kenyan or individual must be resisted actively, and rejected resolutely. I have given most of my life to a better Kenya and if taking it is what will be required to consolidate and secure our democratic gains in this election, or even thereafter, that is a price I am not afraid to pay.

2. I have invested heavily in the past one and a half years in creating a new Judiciary. I have repeatedly given my pledge to the country that the Judiciary will not flinch in interpreting the Constitution as is required, a task we have executed very well. For the 2013 General Election, we have done sufficient ground work to handle both pre- and post-election matters in accordance with the law. On February 28, 2013, we shall hold a special session with all judges of the High Court to give Kenyans a final statement on our preparedness. Therefore, candidates or their supporters — real or claimed — should not panic. We shall decide all cases independently, and with scrupulous fidelity to the Constitution and the law. Let no individual, group, candidate, or supporter imagine that cowardly and darkly acts such as these will cower us. We have seen and overcome worse, and we will all soldier on for this country. None will be held hostage by a cabal of retrogrades.

3. The Judiciary has, in a private correspondence, communicated to Mr. Kimemia as to the legal position on the matter of the ‘small hiccup’ to ensure it never occurs again.

4. I believe that Kenyan security agencies, unless they willfully neglect or refuse to, have the capacity and resources to investigate the sources and partnerships of this threatening letter. To this end, I have this morning sent the letter to the Inspector General of Police, the Director of the Criminal Investigations Department, Director of the National Intelligence Service, and the Director of Public Prosecutions to investigate this matter and give the country a progress report. I am also asking the Inspector General of Police to take the necessary steps to enhance the security of judges and other judicial officers at this time.

5. If anybody, any candidate, any party, any agency, or any other actor thinks that it will bend the ear, mind and resolve of this Chief Justice to do anything that is unconstitutional or illegal, then they are mistaken. On any matter that will come before me or the Supreme Court, I and the Court shall operate strictly within the confines of the Constitution. Intimidation and threats are uninvited guests and will not be hosted in the execution of our mandate.

6. The political class must choose whether, either through direct pronouncements or suggestive behaviour, they want a peaceful, democratic and fair election free from the ring of rigging and intimidation, or whether they want to put the country on a path of violence. Whatever choice the political class and leadership makes, they must remain aware that ultimately, the people of Kenya and the rule of law will triumph. The Judiciary is playing its part in protecting and upholding the Constitution; let Kenyans also do their part.

7. I appeal to Kenyans to hold a peaceful election. It is only by so doing that we shall silence these dark forces of retrogression and also advance our constitutional and democratic promise. My fellow Kenyans, with confidence and tribute to the nation, go and vote for our Constitution. It is the only way to reject those who threaten and proclaim violence as a false choice.