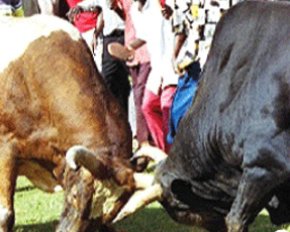 The outbreak of mad-bull disease is not a common occurrence in Kenya as our bulls tend to keep safe. Â The mad-bull disease is common in Britain, New Mexico and the wall streets fictions. But the Member of Parliament for Ikolomani, Hon. Bonny Khalwale, also popularly known for cultural bull-fighting feats has the rare and unique ability to cause the mad-bull syndrome. The MP who is a medical doctor by profession has since adopted politics into the treasury of his heart with a promise, â€œI will be the peopleâ€™s watchman!â€

Roaring behind a microphone during the burial of former veteran politician and change crusader, the late Joseph Martin Oluhanya Shikuku Oyondi, the man who owns the patent of the parliamentary jingle; â€œKimunya Must Go!â€ declared he would continue with the crusade as the peopleâ€™s watchman. This was not before he challenged the PM. Rt. Hon. Raila Odinga to his face to declare that teachers would be awarded their pay-rise demands. Odinga steered clear of the mad-bullâ€™s provocation.

Chairing the powerful Parliamentary Accounts Committee (PAC), Hon. Khalwale has submitted parliamentary committee reports that roughed the mighty in the bureaucracy the wrong way. The perennial casualty of Khalwaleâ€™s purge is the Member of Parliament for Kipipiri and minister for transport the Hon. Amos Muhinga Kimunya. When the mad-bull and now self-baptized â€˜peopleâ€™s watchmanâ€™ first heaved Kimunya, he fired in the air: Â â€œI will not resign,I rather die than resign.â€ That was when hon. Kimunya, as the Minister of Finance, had faced with claims of tawdriness in deals around the sale of Grand Regency Hotel. Â Kimunya then invoked his 21st century political skills by a quick assembly his tribesmen at his Kipipiri home where he claimed his was targeted. This effort proved worthless as the mad-bull merely cooked and ate him to a first fame.

Together with motions and private memberâ€™s bills , Khalwale has so towered parliamentary politics even when an election petition threw him out of the parliament mid last year, he had formed enough muscles that saw him bounce back to the House in a by election held in September, 2011. Even though he only mastered a measly 2 thousand votesâ€™ difference, the Â ego-bull in him bloated further and guess his next move? Yes he is gunning for gubernatorial position in the beautiful county of Kakamega. The master of Mulembe politics has teamed up with Hon. Musalia Mudavadi in the UDF party.

Before the bull-fighter would declare his intention of inheriting the late â€˜Peopleâ€™s Watchmanâ€™, he had spotted his favorite prey-Kimunya again. This time round the Minister for Transport was tied together with the Central Bank of Kenya Governor, Prof. Njuguna Ndungâ€™u he who was voted the worst governor in Africa by his peers. Through the PAC which he chairs, the bull fighter declared the two “unfit to hold officeâ€ following cancellation of currency printing tender with De La Rue. The reports recommended Kimunya to be surcharged for loss of 1.8 billion shillings in the deal. It took the intervention of counter-motion of Hon. Rachael Shebesh she of the passion of a woman fame and Amina Abdalla to turn tables and free the duo from the sharp horns of the bull and his PAC team. Kimunya as usual could simply blame the bull fighter for waging a vendetta against him.

It is unclear how Khalwale would use his Parliamentary record to gain political momentum to push for the coveted Kakamega County Governorship, especially, after legislators seem to have realised his secret talisman and seized it from him. If he swims klutzily as he began to do in the burial of his â€˜mentorâ€™ and â€˜role modelâ€™, the Peopleâ€™s Watchman, then he must be careful of his political future. At the sad ceremony it puzzled all and sundry what the bull-fighter wanted the PM to declare that the government will honor the teachersâ€™ demands for a pay hike at a funeral. Only a man of mad bull diseases could order a prime minister to make a serious government policy at funeral!

Thought defeated, Hon. Dr. Bonny Khalwale’s latest shot at Kimunya and Prof Ndung’u through the PAC was done in the interests of the nation of Kenya. The political conspiracy and underground maneuvers that threw it away without really giving the duo a chance to prove their innocence are common in the House and are the pigments of corruption itself. As the action never lets Kimunya and co safe, Dr. Khalwale’s head remains poised before the public audience. He can transact business with the people.

After defeat of Kimunya II motion, Dr. Khalwale should be careful how to pull publicity stunts especially capitalizing on parliamentary debates in the succeeding period. He should be having better styles and schemes up his sleeves in the meantime, or else he falls into a ditch plastered with laughter. Like Hon. William S. Ruto, he is a politician we want to have but little mistake may snatch him away from us. He may not share dreams with the late Shikuku, the People’s Watchman, from whom he would receive his mantle like Prophets Elisha and Elijah of the Bible, while Shikuku sought for, saw and worked with major changes, the bull-fighter may see them from the periphery. That is a dream in waste-land!

William Makora is an analyst and satirist of social and political issues. Â Make sure you drop by to readÂ  his views andÂ  current affairs analysis.