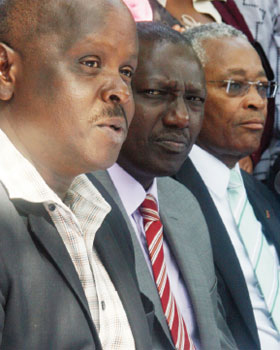 The man-fight, now in its second month, is about referendum on devolution. William Ruto, a late-comer in politics who used to collect tithe in the Christian Union at the University of Nairobi before he was plucked by former president Moi and allegedly given ‘many money’ in 1992 to wreck havoc on “outsiders” found his way to the Deputy Presidency through the ICC from where he currently fights Isaac.

Isaac, a south rift politician with immense contribution to the democratization of the common sense of the people of Kenya, found himself at the receiving end of well-orchestrated tirades by a group of over 15 Jubilee lawmakers, many of them first-and-last time Mps, led by William Ruto, over his continued push for more funding- at least 40% of national allocation-to the devolved counties.

Isaac believes William does not understand why he is the Deputy President. William thinks Isaac isÂ  CORD mole; in this pre-cambrian dishwater thinking are the carry-ons which the deputy president brought with him at the home-coming party of Emurua-Dikirr Mp; honÂ  Johana Ngeno.

“I must not kneel down to demonstrate my point (0n devolution). The central government should be honest and stop taking us round in circles on what is clear to every Kenyan,” thundered Gov. Isaac, adding with finality that “nothing will stop us from asking the 40% revenue for the county governments”.

Disgusted by the continued propaganda about wanting to cause havoc on the Jubilee government, Isaac reiterated he was in the Jubilee to stay, but not as dumb cracker.

“To start moving round the country and branding others traitorsÂ  when they ask for more resources to be devolved is an archaic way of thinking and mere hoodwinking of Kenyans,” belched the Bomet Governor.