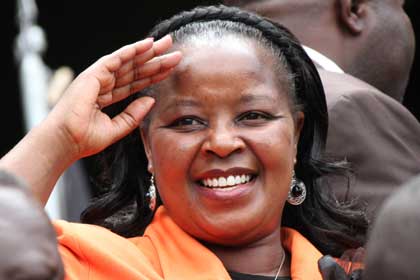 The immediate former Member of Parliament for Starehe, Hon. Bishop Margaret Wanjiru Kariuki is slated for further honors and nobody can stop it. The founder of Jesus Is Alive Ministries, JIAM, Nairobi is a true representative of anointed leadership; the one that brings glory down to the presence of the people.

Wanjiru can be likened to a well of water of blessings from â€˜whichâ€™ people drink and are satisfied. In kindness, she has made the call clear: â€˜Whoever thirsts let him/her come and drink of lasting source!â€™ And in the same meaning of her words, the people have prosperity.

Fondly referred to as Mama Wanjiru, the bishop has risen from rank of file of struggle to accord her life the meaning it is today. She has had her hands on business, management and leadership of people of variable dimensions of caliber. In all these she has earned her excellence without rubbing rough shoulders with stakeholders. She knows that it takes mankind to rise to glory through pure effort and focus.

Mama Wanjiru aspires to inspire hard work and realization of relevant realities. She wants to help people see â€˜work yield wealthâ€™. That is what she has demonstrated over the years, and in the last five years she served as the MP for Starehe when she coined and helped sustain successful community based programs for womenfolk, men and youth. That is what she aspires to extend in an expanded mandate as a Senator.

Mama Wanjiru reaps from a wide range of the field with huge crops in the circles of creed, tribe and race. She beholds blessings of welfare groups which consider her as a symbol of faith, stability and prosperity.

In her bid for the senatorial seat, Bishop Wanjiru leads a trail of aspirants who include; Mike Mbuvi, Okiya Omtatah Okoiti, John Macharia, Maina Njenga, Bishop Boniface Adoyo, among others.

The lady bishop is ahead of the rest in the race due to the fact that she is a darling of the people of the capital city due to her evident discipline and determination to address societal needs. In the erstwhile post, she has been actively engaged in decisive policy processes for responsive leadership, especially, on matters concerned with Kenyansâ€™ welfare. That has seen her stand out of the crowd clad in decency. Unlike others who thrive in uncultured audacity, Bishop Wanjiru commands clean track record. You can trust in her promises.

Apart from Mbuvi and Omtatah, the other rivals of Bishop Wanjiru pass for mere jokers. While Mbuvi thrives in handouts of mysterious monies and theatrics, Omtatah pose as a man standing in shadows of justice for man and property; shadows only rivaling lawlessness and mischief. This make Mbuvi darling of cheap voters and Omtatah, rightsâ€™ class. Mama Wanjiru reaps from a wide range of the field with huge crops in the circles of creed, tribe and race. She beholds blessings of welfare groups which consider her as a symbol of faith, stability and prosperity.

While Mama Wanjiru enjoys those vote advantages her closest rival, Mbuvi, has slippery anthills ahead and baggage of worms on his head. Major Christian and Islamic denominations have, separately, met and resolved to keep the city safe from thuggish manipulations by electing a decent person with proper knowledge of Nairobi and dominant leadership track records. This does not include Mbuvi whose profile is spoilt by theatrics that include splashing of maize-flour over his body in disguise that he protested high cost of life (essential commodities). He passes as one writing curse upon the city without really realizing his misdemeanor.

Together with strong party (read Luo, Luhya, Kamba, Kisii), tribal (read Kikuyu) and womenfolk’s backing, Mama Wanjiru wraps up the million strong lead with backing of the Church to bring glory to Nairobi County Senate. That is good news to the residents, workers, business people and visitors of the capital city; and the lost glory returns to â€˜city in the sunâ€™. Best wishes, Mama!