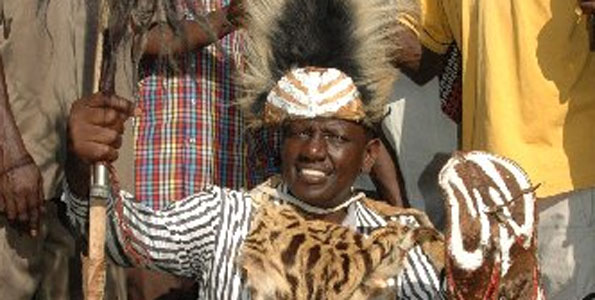 Deputy President William Ruto (then Eldoret North MP) after he was crowned a Luo elder at Kajulu, Kisumu on December 28, 2012. Photo/JACOB OWITI for Nation.Â

From my reading of the story this morning, I got the impression the whole brouhaha is being pushed by Deputy President William Ruto. Reading further, Ruto is pushing Odinga to join government because he sees an opportunity to ‘inherit’ the Luo vote.

From that piece, there are three dangerous assumptions. One, that Raila Odinga is done and out in kenyan politics. Two, that through Raila Odinga, the ‘anointed’ will bag the Luo block vote come the next general election. Three, that the Luo will vote!

But there is more. Ruto is saying he may take on Uhuru in the next election. He is also saying the kikuyu will politically behave normally!

Let me revisit the presumptions above. First, there is a conspiracy in the kenyan mainstream media which presents Raila Odinga as politically octogenarian as to have another stab at the presidency. I disagree! Raila Odinga is in good physical and mental health to resist retirement!

In political rallies, he was a betrayer. Yes, the jubilee paraded the Pentagon: Nyaga, Ngilu, Balala and Ruto himself to diagrammatically capture Odingaâ€™s barrage of betrayals. I remember in Kisii, then candidate Uhuru sensationally claimed â€˜no one can work with him for longâ€™.

Then he ate maize, and stole the youth wages in kazi kwa vijana.

Then Miguna Miguna came ranting. For an angel who was plucked from a successful legal career in Ontario Bar, Canada, â€˜janyandoâ€™ concluded Odinga was a fraud! Â He wrote a book, and told Jeff Koinange all its contents in a massive two-part interview, where he stopped being Luo and was christened Njuguna Njuguna!

But Odinga soldiered on, each day passing through the mendacious editorial benches of the Nation Media Group and the Standard Group; everyday having to contend with the miscarriages at The Hague and the twisted innuendoes being spewed by the press back at home. Â At some point, they gave him a blackout!

In the â€˜Head of Stateâ€™, a movie, main protagonist alderman Mays Gilliam, a blackman, running for President of the United States of America,who, faced with dwindling polls and a series of negative political ads after a damaging political realization that he had a â€˜gun pastâ€™ in a campaign that was initially designed to fail, turns to Martin Geller, his white political strategist (he is part of the design) who after a series of campaign stop-overs with Mays now thinks Mays has a fair shot at the presidency and should not quit.

Here is a conversation the two make:

Martin: I think you should not quit. . .

Mays: Who said I was quitting? You are lucky. . .So lucky. . .You(are) just representing yourself. . .I represent my whole race . . .if I quit, there would be no black presidential candidate for fifty years!

This is the fear and desperation in Luo Nyanza. If Odinga â€˜quitsâ€™, there will be no luo presidential candidate for eternity! Raphael Tuju is not Luo enough. Dr Shem Ochuodho is not Luo enough. Being a Luo is not speaking Luo language or being born of two Luo parents. Politically, being Luo is a struggle to achieve the ends of ethnic inclusion, economic equity, resource â€˜redistributionâ€™ and final annihilation of independence era power structures which rewarded home-guards and punished those who took arms for the country.

In Luo Nyanza, just as in all the other hamlets where â€˜diaspora Luoâ€™ lives; from Busia border to Lungalunga, Raila Odinga is a psychological solution to a political problem. He is seen to embody the struggles and trials of a people. When he went to the Supreme Court, the people went to the Supreme Court. When he came out empty handed, the people came out empty handed. When recently he was at London speaking to the world, the people were there with him.

While I used to think it was egregious to compare the state of Luo politics to African American politics, after this election, certain similarities begun forming in my mind. The struggle for independence, the struggle for post independence inclusion, the systematic expulsion of Luo student leaders from universities, the jailing of lecturers and professors, the assassinations, economic sabotage by killing industries in Luo Nyanza. . . Like alderman Mays Gilliam, Raila Odinga went into the 2013 elections not just representing â€˜himselfâ€™. Raila Odinga embodied all these struggles and more: he now embodies the desire for free, fair, transparent and credible elections where the voice of those who cast the vote consumes the chattering of those who count the votes and declare results!

This brings me to the question: Is William Ruto ready to inherit â€˜the peopleâ€™? Is he ready to inherit the â€˜Luoâ€™ as a lakeside community living in Nyanza but with tentacles in every hook and crook of the Coast and North Eastern; Western and Eastern; Nairobi and its sprawling slums? Is he ready to be a psychological solution to a political problem even before he attempts to solve it?

Â I do not know what other people who voted Odinga had in mind, but for the Luo, it was a very personal vote.

So when I read the new realization that Odingaâ€™s international connections can be put into better use for the â€˜countryâ€™, and the push being intensified by none other than William Ruto, a man whose political rhetoric was to present a villain Odinga, I had those many unanswered questions.

William Ruto is many things to many people and many regions. To the children of that IDP whose fatherâ€™s parcel of land changed ownership to Ruto through one Yator, he is an unforgiving land grabber. Kisii Nyanza is still a no go zone for Ruto. The memories of Borabu border have not been healed by tyranny of numbers.

Â To the Central Kenya mandarins in government, and the masses who now praise him as â€˜performerâ€™, his correct designation will soon appear. For now, just as they pampered Raila Odinga at the beginning, even being given a cabinet sub-committee to chair, William Ruto is having his moments. He is being flown all over. He is giving directives, making orders, and chairing meetings. He is indeed being set up for slaughter!

Â To the Luo of Nyanza, he is the man whose politics of exclusion has pushed the status of a whole community into a political oblivion. In the just concluded cabinet appointments, there is a quiet monologue, a communal monologue. Only one? Only one woman? How did it happen?

In daily interactions in Nyanza, where politics come before economics, this much the mainstream media may never know, the Luo do not have a problem with Uhuru Kenyatta as person, but William Samoei Ruto?

In picking out Raila Odinga for political reward, Ruto is having a long dream, a political nightmare. Will fruition come?https://www.kenya-today.com/opinion/beyond-raila-odinga-inheriting-the-luo-vote-william-ruto