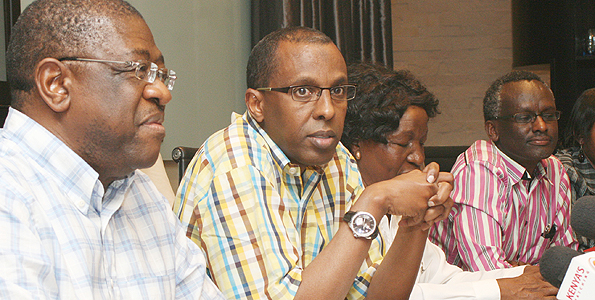 JSC as a whole should be investigated

There once was a King who had in his counsel a Judge, a Rich man and a Poor man. The King suspected that one of his advisors was not to be trusted, but he was not sure whom. So, he called the Judge and said. â€œSomeone TOOK my Scepter.â€ Immediately the Judge called all the advisors before the King. â€œSomeone STOLE the Kingâ€™s Scepter.â€ The Rich man said, â€œI am rich, wealthy beyond imagination, why would I steal anything, when I do not lack?â€ The Judge agreed with this, and immediately accused, judged and sentenced the poor man to death. â€œWe KNOW that you stole the Kingâ€™s Scepter,â€ said the Judge.

The poor man said, â€œMy King, I have no money so I have no measurable success to hide behind, I am not a Judge to embody justice and thus be above accusation, and I am not the King who owns all. But Sire, I have only one thing in this world that no one gave me or can take away and that is my truth. I did not take your scepter and I do not know who did.â€ He insisted on his innocence, even up to the moment that the executioner raised the axe above his head.
Then the King stood up. â€œStop! I now know which one of you I cannot trust.â€ And the King showed them his Scepter which he had hidden all along.

In any nation, injustice taints the leadership and honor of the office bearers at the highest echelons, more so, when the injustice is delivered by one of the very institutions that are to implement justice for Citizens. When the Judicial Service Commission voted 5-7 to suspend the Chief Registrar of Judiciary, Gladys Shollei, based on allegations and insinuations rather than actual charges of proven impropriety, an injustice was delivered. That a high office bearer can be hounded out of office based on claims of apparitions and ghostly corruption is not just morally reprehensible it depicts aptly the deeply rooted ROT that festers deep within the JSC.

Just imagine how simple it is to get someone out of the way, or into office then. One doesnâ€™t need any concrete facts or concerted effort to reach the truth, merely an allegation. What is truly disturbing is how much of the so called â€œdubiousâ€ contracts Ms. Shollei is accused of handling already existed before she took office.

We can however, tell what the problem is with the JSC. Itâ€™s not just that the officials themselves need to be weighed, measured and tried, but the powers of the offices they hold need to be curtailed, curbed and cut. Yes CUT. To a just and judicious level befitting the sort of people we sadly appoint to these offices.

Letâ€™s face it Kenya has only a handful of actual Jurists, none of whom are in the JSC. This is an institution that has proven incapable of justly considering its own procurements verses the state of the nation in deciding to build the CJ an extravagant home. As if that was not disgusting enough, a few months ago, the JSC had the temerity to argue that acquiring luxury cars for judges was a constitutional right!

So here we are, some months later, when lo and behold a strange spirit of buyers’ regret has invade the JSC and rather than perform an AUDIT as would be appropriate, correct and JUST, they choose to summarily suspend the Chief Registrar without merit, without proof of allegations and without even giving her the chance to know what or who her accusers are.

Rather than the JSC conducting investigations FIRST and then suspending Ms. Shollei if evidence was found, they decide to suspend her, claim they will investigate allegations and do this in full view of the entire country. You have to admire such brazenness. If I were King, I would certainly see the hanging judge hang himself, so as to restore the peopleâ€™s faith in the legitimacy of my office; but I am not King.

If nothing else, we have to thank these JSC officials for demonstrating how far from anything lawful this â€œinvestigationâ€ will be. I dare say all we will be served after two weeks is more rumor and allegation. At the very least, now we know what level of â€œjusticeâ€ to expect from the JSC. That explains the sort of â€œjusticeâ€ we get from the Judiciary too, I expect.

This piece was first published on 28 August, to read more of Betty Njoroge’s opinion pieces please follow this link and on twitter @bettywaitherero