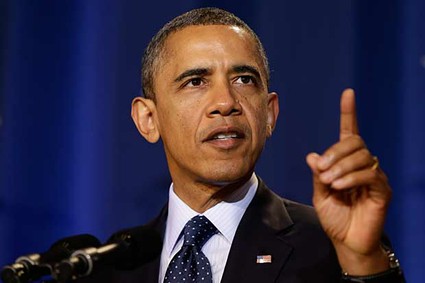 Thank you very much to the warm people of Kenya. Let me thank governor Kidero and senator Sonko, for the warm welcome into your city. President Uhuru Kenyatta and Deputy President William Ruto thank you for being steadfast in your love and optimism about Kenya. To my friend Raila Odinga, thank you for sacrificing all you could to make sure democracy and the rule of law prevails in this country.

I come to Kenya at its finest hour. Today, I speak to you not just as the president of the United States but also a son to a father who hailed from Kenya, in Siaya. I must admit that Donald Trump is part of my entourage so that we can finally get my birth certificate and put this little matter to rest.

As you all may know, at the height of the Cold War, my father decided, like so many others in the forgotten corners of the world, that his dream required the freedom and opportunity promised by the West. And so he wrote letter after letter to universities all across America until somebody, somewhere answered his prayer for a better life. It is as a student at a university in Hawaii that he met my mother and together they bore a son, Barrack.

Kenya knows the dream of freedom. And you know that the only reason we are here today is because men and women from all across the country came together to work, struggle, and sacrifice for that better life. People like Dedan Kimathi, Koitalel Arap Samoei, James Gichuru, Mekatilili wa Menza, Jomo Kenyatta, Oginga Odinga among others will forever be remembered for the sacrifices they made to make sure the children of their children would enjoy the fruits of independence.

Sometimes odds have been stuck against this Kenya. But even in the darkest hours, the people of Kenya have always kept the flame of hope burning. It is no surprise that Kenyans are among the most optimistic people in the world. The people of Kenya have always refused to give up. At the height of corruption scandals and the big fish going Scott free, Kenyans have always moved on to other struggles. After terrorists hit Nairobi and Mombasa, Kenyans have refused to be intimated. And when the country was almost being written off as a failed state in 2007, Kenyans regrouped and have soldiered on, despite tough differences sometimes occasioned by tribalism. People of Africa, look at Kenya!

And Kenya has remained beautiful in all circumstances. From the snow-capped Mount Kenya to the sandy beaches of Malindi, from the plains of Kano to the mountain ranges of Aberdare, from the spectacular shores of Lake Victoria to the ever flowing Tana, Kenya is richly endowed by nature. The unequalled beauties of the wildlife of Maasai Mara are but a few of the descriptions of Kenyaâ€™s natural beauty.

More than anything, however, the beauty of Kenya is its people. You are a mosaic of almost forty five tribes, many clans; hundreds of languages and a multitude of cultures and histories. Some of you are farmers, others fishers. Some are nomads, some herdsmen, some scientists; some highly educated others just literate. Some are very successful and prosperous but still many others not so fortunate. Each has their own unique history, culture and pride.

Though many, when classified and grouped, the people of Kenya are also inseparably woven together by a common destiny, history and a unique oneness underpinned by common values. Hospitality in the midst of adversity and willingness to joyfully share resources even in a situation of scarcity and need are two values that never end to fascinate me.

People of Kenya! You are all beautiful. And its beauty does not end in itself. Although wounded and hurt, bruised and abused, including by some of its own children, Kenya is one of the precious jewels of Africa in modern civilization. Despite all the evils that have been inflicted against its people, history, culture and nationhood, your country has proved its potential, resilience and perseverance time and again.

A large number of Kenyaâ€™s s precious children have shown the world that they can excel in all fields and occupations. If soccer is this countryâ€™s submarine, then Victor Wanyama has proved to be its telescope, surveying the midfield all the way in Scotland with his club, Celtic. David Rudisha continues to redefine short distance running, dominating the 800m race in a way only he can. My own story is part of the dreams that many Kenyans share. Today, many people who trace their roots to Kenya are getting positions of authority all over the world. In Claremont, one very affluent community in Southern California has elected a Kenyan born Opanyi Nasiali, a man born in Maragoli, to be their mayor.

As much as it is a country of beauty, however, Kenya is also full of paradoxes. While nations and peoples afar off enjoy the fruits of your land, rivers, lakes and seashores for a very little price, it is sad there are also other Kenyans who do not even get adequate meals or safe and clean drinking water. While many of Kenyaâ€™s educated children deck the worldâ€™s libraries with their literary and professional works, many of Kenyanâ€™s children do not even have access to good primary education. While Kenyaâ€™s doctors provide sophisticated medical services in other parts of the world, thousands of mothers and little children die in Kenya every year due to lack of even the most basic health services. The list of hardships that many of our people endure is very long and the needs enormous.

There is a lot that Kenya can and must do to further improve its economic, social and political conditions. Corruption must be stopped. There is a need to build more schools, hospitals, roads, airports, power plants, factories and laboratories. There must be emphasis on math and science in schools to prepare the next generation of innovators. More than anything else, it is high time that Kenya took charge of its own destiny. While the assistance and cooperation of all people, organizations and governments of good will from elsewhere should be welcome, I am convinced that no other nation, organization or people can and will put Kenya as its first priority more than Kenyans themselves.

It is no secret that today, Kenya, just like many developing countries, bleeds more from the attack perpetrated on its people by its own â€˜leadersâ€™ than foreign enemies. You cannot continue to blame the west. Do not get me wrong here. Let me be clear. I have no doubt that unscrupulous foreign interests and individuals add fuel to the conflicts created internally in order to continue unhindered in their plunder of your riches. But I am reminded of that timeless African saying that â€œThe hyena enters the compound using the hole created by the family dogâ€.

People of Kenya, People of Africa; there is need to learn more, work harder and invest in your future. We all hold dear the fact that the optimist sees an opportunity in every difficulty and the pessimist sees a difficulty in every opportunity. Yes the problems you face are many and the challenges great. However, these difficulties also provide us with the opportunity to do our part and pass on this beautiful country, made even more beautiful through efforts and sacrifices, to the next generation.

This reminds me way back in 2007 when I was running for the Democratic Party presidential nomination. As many of you may recall, it was a tough race. I was just a skinny kid with a funny running up against established names. I think Alfred Mutua had killed any chance I had of picking a few endorsements after he called me a â€˜junior senatorâ€™ during my visit to Kenya back then.

I had been campaigning non-stop, traveling all through towns and having town hall meetings and shaking hands. And in between, I was making phone calls, asking people for support. So one day after making a campaign stop in South Carolina, I still had to do so much. I got to the hotel about one in the morning. I was wiped out. I was exhausted. Back then I did not fly on Air Force One. And the accommodations were a little different. And just as I was about to walk into the room, one of my staff taps me on the shoulder to say, “Excuse me, Senator” â€“we are going on the road early in the morning! I know Uhuru Kenyatta and Raila Odinga both can agree on such rigors of campaigns.

So a few hours later, I wake up and I am feeling terrible. I think a cold is coming on. And I open up the curtains to try to get some light to wake me up, but it is pouring down rain. And I take a shower and get some coffee, and I open up the newspaper and there’s a bad story about me! I was much more sensitive at that time to bad stories. Finally we get to our destination. And we pull up to a small field house, and I walked in, and I am looking around. I do not hear a lot going on. But I am running for President, so I do what I’m supposed to do, and I am shaking hands, I say, “How do you do… nice to meet you.” And I’m making my way around the room, and suddenly I hear this voice cry out behind me: “Fired up.” And I am startled, and I do not know what is going on. But everybody in the room act like this is normal. And when the voice says, “Fired up,” they all say, “Ready to go.” And so once again, I hear the voice: “Fired up.” They say, “Fired up.” They say, “Ready to go!”

I look around; I turned behind me there is this woman, looks like she just came from church for she had a big church hat. And she’s looking at me, kind of peering at me, and she’s grinning, smiling, and looking happy. So for the next few minutes, she just keeps on saying “Fired up.” And everybody says “Fired up,” and she says she’s “Ready to go,” and everybody else says “Ready to go.”

And I’m thinking this woman is showing me up. This is my meeting. I’m running for President. And she’s dominating the room. And I look at my staff, and they just shrug their shoulders. They don’t know what to do. So this goes on for a few minutes. After a few minutes, I’m feeling kind of fired up. I’m feeling like I’m ready to go. So I start joining in the chant, and my staff starts joining in the chant. And somehow I feel pretty good.

People of Kenya, be fired up and ready to go. Be fired up to meet the challenges ahead. You are ready to go to the Canaan of jobs, that which the forefather had in mind about this great country.

To read more of Mukurima’s opinions visit his blog http://mukurima.blogspot.nl/