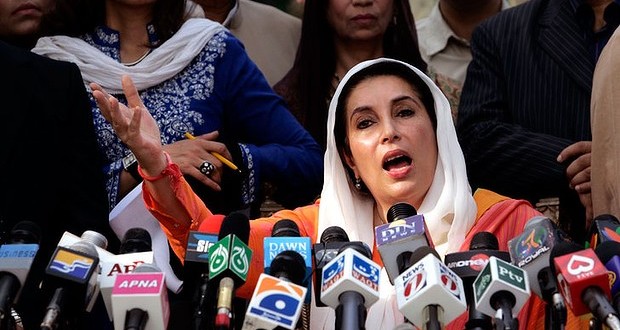 A Book Review of Getting Away with Murder: Benazir Bhuto’s Assassination and the Politics of Pakistani by Heraldo Munoz,

December 2013 marked the sixth anniversary of the assassination of Benazir Bhutto, the remarkable woman who twice served as Pakistanâ€™s Prime Minister and who had come to symbolize the countryâ€™s hope for a better future. She was killed in the same park where Pakistanâ€™s first Prime Minister was assassinated in 1951.

The Pakistani government led by Benazirâ€™s husband, President Asif Zardari, asked the United Nations to undertake an inquiry into her assassination. Now we have an insightful book by the man who chaired the UN inquiry, a Chilean diplomat Heraldo Munoz, Getting Away With Murder: Benazir Bhuttoâ€™s Assassination and the Politics of Pakistan.

Bhutto was in exile at the start of 2007 and was a key leader of the opposition to the military dictatorship of General Pervez Musharaf, Americaâ€™s man in Islamabad. When Musharrafâ€™s regime began to unravel in 2007 George Bush stood by his man. Instead of calling for the rule of law and an independent judiciary, the administration urged patience and compromise. It did criticize Musharrafâ€™s imposition of martial law in November 2007 but only reluctantly. Increasingly desperate to keep Musharraf in power, the Bush team began to support an idea to try to soften the face of military rule in Pakistan through a shotgun political marriage between Musharraf and Benazir.

This marriage of hated foes would bring Ms. Bhutto back to Pakistan to serve as Prime Minister and run domestic issues while Musharraf would remain President and control national security issues. Encouraged by the White House, Musharraf met secretly with Benazir in Dubai to see if they could reach a deal and the two began to find they might be able to do so. Benazir saw a chance to return home, have the corruption charges against her and her husband lifted, and compete for power. Musharraf was very reluctant but was also increasingly desperate to hold onto power.

It was a foolish idea. The two could not really share power and the issues could not be so easily separated. Musharraf was especially opposed to giving up his uniform, i.e. to stop being Chief of Army Staff since that was the real source of his power and Ms. Bhutto knew she would not really run the country if he was still COAS. I said so at the time. I told the New York Times in October 2007 that â€œthis backroom deal is going to explode in our face.â€ The reality, I argued, is that â€œMs Bhutto and Mr. Musharraf detest each other, and the concept that they can somehow work collaboratively is a real stretch.â€

Ms. Bhutto returned to Karachi on October 18, 2007 and was almost killed in an assassination attempt that evening while she was traveling among hundreds of thousands of adoring followers to her home. She was murdered on December 27, 2007 while attending a political rally in Rawalpindi. The elections that followed in 2008 were relatively free and fair and brought her husband, Zardari, to power. At his request, the United Nations was asked to do an inquiry into the â€œfacts and circumstances of the assassinationâ€ of Benazir Bhutto. The result is a fascinating document and analysis of Pakistanâ€™s political system and the links between the army and the jihad.

The UN concluded that Benazir was probably killed by al Qaeda and its Pakistani Taliban allies who recruited the 15-year-old suicide bomber. An al Qaeda spokesman claimed credit for the murder saying â€œwe have terminated the most precious American assetâ€ in Pakistan.

The UN investigators point a particular finger at the notorious al Qaeda operative, Ilyas Kashmiri, as the possible mastermind. Osama bin Laden later tasked Kashmiri with preparing a plan to kill Barack Obama. Instead a drone killed Kashmiri in 2011. The report notes that Ms. Bhutto represented everything the jihad hated: a woman in politics, educated in the west, opposed to extremism and advocate of a harsh crackdown on the jihadist movement in Pakistan. And the report notes that many saw her as a Shia as well because her mother and husband are Shia.

The more damaging conclusion of the UN inquiry, however, is that the Musharraf government did far too little to protect Benazir despite her repeated requests and then deliberately and effectively took action to make a thorough investigation of the crime impossible. With adequate protection, the UN says, â€œMs Bhuttoâ€™s assassination could have been prevented.â€

Instead, the Musharraf government denied her the normal security arrangements for any VIP in Pakistan, even after the first attack in Karachi. The cover-up was even worse. The crime scene was immediately washed down by fire hoses to remove forensic evidence, no proper autopsy was conducted, and â€œhigh ranking Pakistani government authorities obstructed access to military and intelligence sourcesâ€ to impede the inquiry.

The UN concluded that Pakistani intelligence, the ISI, played a key role in the cover-up and intimidated the Pakistani police from doing their job. It may have been even quietly encouraging the assassins through former officials who had well-known contacts with the extremists. Benazir, before her death, had alleged that former ISI officials were plotting her demise with al Qaeda, including former Director General Hamid Gul. Munoz tells us the then ISI Director Nadeem Taj met with Bhutto early in the morning of her murder to try to persuade her to stop campaigning for office.

Munozâ€™s book tells the story of how his inquiry was systematically blocked by what he calls the â€œestablishmentâ€ in Pakistan which did not want the truth to come out. He also exposes succinctly the disastrous policy of the Bush-Cheney team, which tried to arrange a political deal to save the Musharraf regime and saw that deal blow up literally in its face. Itâ€™s a sobering reminder of why America should not cling to military dictators today in other Muslim countries.

(Bruce Riedel, a 30-year veteran of the CIA, is a senior fellow of the Brookings Institution and director of the Brookings Intelligence Project; his most recent book is Avoiding Armageddon: America, India, and Pakistan to the Brink and Back (Brookings FOCUS Book 2013).)