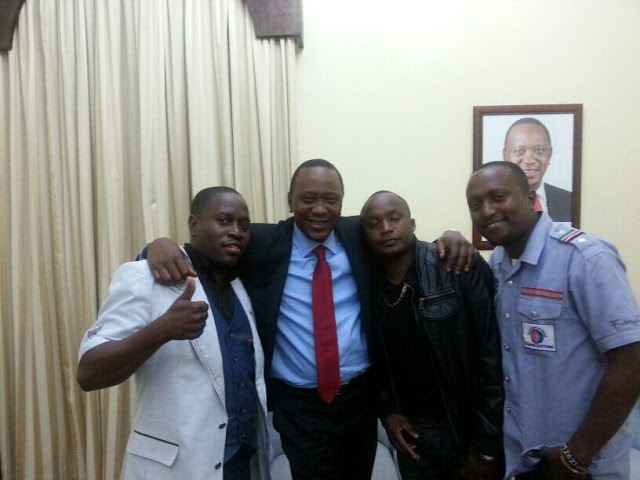 By Fidel Wangai aka Fidel Jesus

UHURU KENYATTA:
That the President of Kenya, Uhuru Kenyatta, is a man of showbiz cannot be doubted. Unlike his predecessors, Jomo Kenyatta, Daniel Moi and Mwai Kibaki, he is unique. He has sought to demystify The Presidency.
– He has opened State House to the public by hosting ordinary citizens and personally showing them around.
– He has held up close and candid interviews with the media.
– His bromance with the Deputy President, William Ruto, and cracking jokes was never seen with those before him and their deputies
– He has taken selfies.
– He has oftentimes put the suits aside and appeared in casual wear.
– Which other Kenyan President did you hear leading in a song?
– He has personally riden motorbikes and driven cars. He even rode in a school bus.
– He publicly stopped politicians from referring to him as “Mtukufu Rais”.
– By his orders, the queer tender for airlifting Presidential speeches was dismissed.
– He has ‘adopted’ talented learners offering to empower their lives academically and financially.
– He has been to Tanzania by road, stopping for some juicy nyama choma.
– He has mingled with the common mwananchi like enjoying a chat with a tout, maize vendor and recognising his supplier of newspapers.
– He has dined in a common hotel and visited a public beach.
– He has swept the streets.
– His presence on social media cannot go unnoticed.
– On a phone’s loudspeaker, he halted the demolition of citizens’ properties.
– He featured on adverts for Uwezo Fund and installation of CCTV cameras in major cities and towns.
– Unable to attend the wedding of his friend Roughtone, he sent a signed card (and methinks, a present).
– Even put aside his power and played the part of a pallbearer.
– He has personally supervised the destruction of a ship laden with drugs.
– Only yesterday he appeared in nicely-fitting military uniform reminding us all that he is still the HEAD of State and Government, COMMANDER-IN-CHIEF of the Kenya Defence Forces and the chairperson of the National Security Council.

Inconsequetial as some of the above events may seem, President Uhuru appears more social and friendly than any other Mheshimiwa. It is only a matter of time before he rides in a matatu or appears on Sakata. Only time will tell let’s wait.

Although he has not fully lived up to his promises to and expectations from the common mwananchi, although he hasn’t delivered on all his election pledges, I must admit he is a cool president. Although his visits to parts like Nyanza and North Eastern has not been as often as to parts such as Rift Valley and Coast, although his election as President on March 4th has been subject to questions from the Opposition, although he has signed into law some controversial bills, although some of the appointments he makes does not reflect his concern for age, persons with disabilities, gender and regional balance, although he has not fully addressed thorny issues such as insecurity or unemployment, Uhuru Kenyatta has made a name for himself in the annals of Kenyan history as the first President who demystified the office.

Uhuru Kenyatta as a person is not a bad guy. We are not all that perfect either. Just like me and you, he has dents and punctures here and there. The problem with U.K is the people he chooses to associate himself with and his reluctance to crack the whip on wayward fellows. Moses Kuria’s facebook posts will continue reflecting barbarism and primitive energy unless he detaches himself from such characters. My advice to the President is to make sure everybody in his ‘boat’ is rowing and not drilling holes.

Someone once said, “To avoid criticsm, do nothing and be nothing”. Sadly for him, he still faces condemnation and ridicule from those who naturally hate him. It is in them genetically. They must hate. They must complain. Those who go around looking for faults always find for faults. Led by the likes of journalist Mohammed Ali (Tobias) and blogger Robert Alai (Sanbalat).

Some Kenyans will ever count what they have NOT been given while deliberately being blind to what they have been given. I admit, things are not where we would want them to be. But, hey, give credit where it is due. You can’t be celebrated if you can’t celebrate others.

The realest people don’t have alot of friends. Those who want to bring you down are already below you. And when you point at another person, remember that your three other fingers are pointing back at you.

Those who go throwing mud at others, are left with mud in their own hands.

“Throughout life people will make you mad, disrespect you and treat you bad. Let God deal with the things they do, cause hate in your heart will consume you too.” – Will Smith.

When walking in the village, I don’t go throwing stones at every dog that barks at me. I just ignore them and walk on.