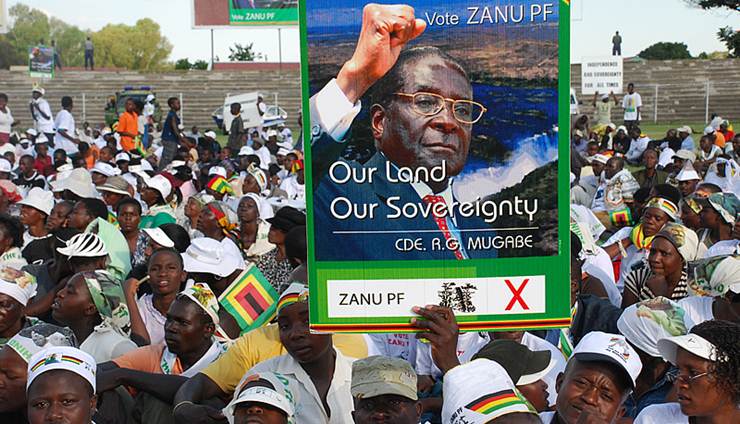 In the folds of postmodernist African democracy, it is regrettable that the African peasant was born and shall die, imprisoned, conditioned, depressed, exalted and less inspired. The political praxis of grand coalitions as emerging â€œdemocraticâ€ trends reflected upon through the prism of communication axiology, based on functional greed for power and material wealth by politicians across African counties does not escape this paper.

This piece is an analysis of the praxiology that democracy is a chance for every citizen of age to voice their will through the ballot, on the desired leaders to assume political office. In the end, the tenets of democracy hold it that the majority through such franchise should have their way.

The emergence of hybrid regimes in Africa in the name of Government of National Unity, begs the question whether democracy is on its deathbed in Africa. At the risk of sounding like a theoretical pessimist, this personal maxim impels me to invite you to a conversation through which we shall find it inescapable to interrogate the recent trends that can be traced from the north of Limpopo to the South of Morocco.

Headlines out of Africa in the past few years have been the few dramatic failures of democracy. Perchance the only impressive one has been recent development of smooth power transfer in Ghana after the death of good old Prof. John Attah Mills.
This paper argues for rigorous retrospective and prospective intellectual reflections on Africaâ€™s democratization process and the evolving governance architecture and how they have promoted governments of national unity as unique democracies in Africa.

Further, this paper is keen to interrogate the state of knowledge on and the discourse on democracy, governance and development in Africa, with the purpose of identifying and reviewing the lessons learned, problems and challenges in democratic trends, especially with the emergence of Governments of National Unity. It interests this paper to examine the options, notably for policymaking, as the Coalition partners seek to differentiate themselves and looks towards the next general election.
Even an alien does not need to be told that the happenings in Kenya in the aftermath of the 2007/08 post-poll malaise, the example of Zimbabwe, the situations in Mali inter alia, point to the need for interrogating African democracy. Juxtaposing these African trends with the unavoidable benefit of benchmarking trends in the West, (and here I am not alluding to decency or perfection), it is self evident that democracy could as well mean different things to different people.

Evidently, it is generally believed that the consolidation of democracy, periodic elections and sound governance institutions is central to reducing anarchy, despotism, promoting sustainable economic growth and achieving social progress and economic development in Africa.

Periodic elections have not necessarily resulted to successful popular democracies in Africa. Zimbabwe, for instance, is known for its elections just as much as Uganda. Yet the results of these elections bring out a different message. Most of these elections are emerging as cosmetic â€˜democraticâ€™ practices that leave a bad taste in the mouth.

African â€˜democracyâ€™ is checkered with a rich legacy of civil wars, violently contested election results, genocide and related hecatombs, dictatorship and the attendant impunity, it is easy to question whether in practice, Africa has zigzag democracy. Whither the democrats? Is Africa an autocratic hideout?

What excuses can be given for the democratic setbacks that are self-evident? Today we are converged on this African soil to eloquently ask: Is the Government of National Unity a viable transitional tool?
Let us pause and ask; what is TRANSITION as used in democratic settings? And what is democracy by the way? Even the Ancient Greeks who invented democracy couldnâ€™t agree on what it meant. The GNUâ€™s are not a recent phenomenon.

History documents that there was the Transitional Government of National Unity, a coalition government of armed groups that nominally ruled Chad from 1979 to 1982, during the most chaotic phase of the long-running civil war that began in 1965. The GUNT replaced the fragile alliance led by FÃ©lix Malloum and HissÃ¨ne HabrÃ©, which collapsed in February 1979.

Factually, Violent ethno-political conflicts, separatist movements, strong sentimental ethnicity, rivalry access to political power and state capture, or historical injustices, economic dislocation, among others, assail the integrity of the developing democracies to find internal common ground for growth and stability. It is these things that breed suspicion and conflict which heat up electioneering periods and provide fodder for contesting election results (see Javas Bigamboâ€™s Political Power and Conflict in Kenya) .

In recent years, the dimensions of internal conflict in Africa have become more complex due to the growing and fluid challenges posed by ethnic rivalry and political exploitation.

By their nature, GNUs are naturally characterized by intense rivalries, mistrust, sabotage, witch-hunt, corruption, political uncertainties and negative competition. As a matter of fact, there can be no real unity in that government on national â€œunityâ€. How then do GNUs come about? In principle, they are a function of mediation, facilitation and negotiation. Negotiation and non-binding mediation are alternative dispute resolution (ADR) processes designed to resolve a conflict between parties unable to reach agreement.
Negotiation is the process of bargaining between two (or more) interests. It can be conducted directly by the concerned parties or can take place during the mediation process. In negotiation, the concerned parties meet to resolve a dispute.
Facilitation refers to skilled leadership focused on meeting process and organization. Agency staff or third parties can facilitate. Because it is broadly applicable to public involvement situations other than dispute resolution, facilitation is presented in this volume as a separate technique.
Mediation uses a trained, impartial third party to help reach consensus on substantive issues at disagreement among conflicting parties in public involvement. A mediator can be from within or outside an agency but must be neutral and perceived as such by all parties. Mediation and negotiation take a problem-solving approach rather than an adversarial one. Mediation is a way of assisting negotiations and transforming conflicts with the support of an acceptable third party. Facilitation is similar to mediation (especially facilitative mediation), yet it is less directive. Unlike mediation, facilitation does not focus so much on decision-making, but rather on enhancing the mutual understanding of perceptions, interests and needs or preparing for joint action .
Usually on the surface, the conflict usually appears to be a squabble over election results. Yet in reality, the election disputes are always an ugly manifestation of deep divisions that are underlined by ethnicity, nationality, religion and fragmentation among groups in the along geographical lines.
Franz Oppenheimerâ€™s 19th Century classic, The State is a solid argument that the state emerged as a result of conquest and subjugation, particularly by nomadic herding societies over more peaceful agricultural populations. Could this be the theoretical consolation for the zigzag democracy we witness in Africa? It is nearly common place that intra-state conflicts result from key opposing groups in elections refusing to accept results. The issue of the form, content and â€œfeasibility of democracy in Africaâ€ needs to be re-examined as part of the charting of the future of democracy in Africa, particularly as violent conflict and steady emergence of grand coalition governments or governments of national unity in the aftermath of contested elections.
African states have undertaken increasing commitments to good governance since the African Union replaced the Organisation of African Unity in 2002. Among these commitments are the provisions of the Constitutive Act of the African Union, in which member states agree to promote human rights, democratic principles and institutions, popular participation and good governance. Other newly adopted documents include the New Partnership for Africaâ€™s Development (NEPAD) and the African Peer Review Mechanism (APRM), the Convention on Preventing and Combating Corruption and the Charter on Democracy, Elections and Governance .
The AU must grow strong teeth, and use those teeth to bite, not to make a show of canines. Arguably, the AU has depressingly under-performed since its founding. The examples of Sudanâ€™s President Al Bashirâ€™s impunity and non-cooperation with the International Criminal Court on crimes against humanity; Yoweri Museveni of Ugandaâ€™s blindness to justice; the state of Libyan turmoil before the death of Muammar Gaddafi; the statelessness of Somali for so many years; Zimbabweâ€™s continued failure; all these under the watch of the AU, coupled with economic nose-diving of African economies all point to how powerless and inefficient the AU is. The AU must strive to tackle even the challenges of terrorism, a matter that is becoming a challenge to Africa from Nigeria to Kenya, and the recent Kenya situation is an eyesore.(see moreÂ http://www.sipri.org/research/security/africa/case_studies/kenya).
Besides that, it would be good to know the position of the AU on the emergence of coalition governments in Africa.Â Grand coalition governments do not work. They are merely cosmetic pyrrhic victories for power-thirsty politicians who have nothing to offer but their appetites. As in Kenya, Zimbabwe ended up with a cabinet so big that it drains the countryâ€™s resources. Ordinary citizens in Kenya and Zimbabwe bear the painful, costly and unnecessary burden of shouldering bloated cabinets, horse-trading, cronyism, nepotism and push & pull between coalition partners. In the end, itâ€™s upon Africa to determine its political and socio-economic path.

The spirit of Pan-Africanism should be revived; the young Africans, the youth and the reformists must now stand up to be counted.