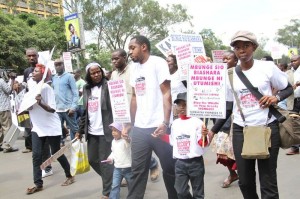 Africa should put her house in order

Africa is an epitome of horrific leadership, marginalization and civil wars. Whenever the name Africa comes up, heads starts rolling with little hope of anything positive from the cradle of mankind.

Coups and counter coups is the order of the day. We are well endowed with dictators, tyrants and pretentious leadership fond of lecturing us on democracy while they openly practice the reverse.

Just the other day, the military in Egypt ousted President Morsi from power after days of demonstrations in the streets of Cairo. Mr. Morsi rose to power and stared practicing what his fellow club members are obsessed with.

Employing his cronies to government plum jobs, oppressing the opposition, imposing sharia law and declaring his orders above the law was the rule of this man. The Egypt army did the right thing.

They could not let their country go to hell because of one filthy individual, they saved their country. Even though lackadaisical Moses Kuria, a TNAÂ  operative and propagandist, opposes this move-we all understand his worst fears.

It is a pity that when AU, a club of African autocrats in solidarity, met in Addis, only Botswana opposed their tirade directed at the ICC. You all know how Museveni oppresses the opposition in Uganda, how Mugabe deals with Tsvangirai in Zimbabwe and back home, how successive regimes have crippled, maimed, killed and detained opposition leaders and civil rights activists.

These leaders are always quick to blame the West for their woes while in real terms, they are their own enemies. Moses Kuria, the TNA spanner boy, insinuated in a Tv interview that the ultimate test of how democratic a regime is, is whether that regime was democratically elected or not.

According to him, it doesn’t matter how the regime governs. Whether you employ your tribe only and give key government jobs to your extended family is not a cause for worry. I his terms, democracy is only pegged on elections.

Unlike other continents where leadership is natured, Africa kills her leadership. Once someone gets power, he/she wants to rule forever. We have living examples of people who have declared themselves presidents forever.

This tendency where people grab power to insulate them from something should cease.

It sickens for example, when in Kenya, all the four presidents we have had subscribe to bad books of crime. Not even the first president qualifies to be a hero. You may ask why? The reason is, heroes aren’t tainted as Kenyatta was.

Don’t mistake me for Afro pessimist. I am the contrary. I dream of a flourishing Africa with wealth and individual freedom. Africa where individuals accused of manslaughter will not enjoy power camouflaged as shepherds of their citizens.

We should not blame the West for our mistakes. When Kenyans were warned that choices have consequences, the “tyranny of numbers” propagators rubbed it off. “the US is hitting below the belt” they roared.

They falsely thought that their “enemies” would suffer more and in isolation. On the contrary, miraa from Kenya has been banned from entering some countries who are arguablyÂ major consumers. You can deduce the next move.

Until we put our house in order, let’s stop the venomous statements directed at the West. May be Africa spring will sort out this mess we are in.

What dictators like Museveni, Mugabe and Muigai – these M’s – should know is that currently in Kenya, a village elder is highly regarded more than former president.