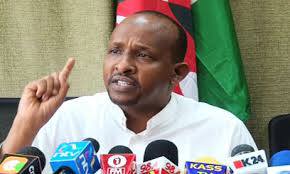 Aden Duale is in the frying pan, and he doesn’t seem to know so. When those activists christened one of the pigs they used at the demonstration ‘Aden Duale’, I thought it very apt, but in a different sense ~ fried pork. He is without a doubt the most hated and despised of all MPs. This is more by design, than by chance. Here is why.

Aden Duale ~ Ruto’s pointman in the North East ~ and his Party boss are being set up by the TNA wing of Jubilee, in a script that bears an uncanny resemblance to the one used by those who sent Raila Odinga to clear the Mau of human settlement, before using the evictions to drive a wedge between him and a significant portion of his support base. He is being sent on errands that have quickly transformed him into the most hated MP in ‘Bunge’. Even Jubilee MPs are reportedly scheming to have him replaced as majority leader because of what they claim conduct inappropriate for the holder of such an hallowed position.

Aden Duale badly needs to slow down if he knows what is good for him, but he won’t because he must ‘defend’ the President in the exact manner prescribed by those who send him to yell and heckle all manner of obnoxious stuff regardless of what it does to his reputation and standing in the eyes of his colleagues and the wider public. How ~ pray tell meÂ  does anyone that went to school claim that the Presidential jet is an instrument of power, and therefore not transferable? Never mind that Ruto recently purported to deploy the military to attend to insecurity in North Eastern against all tenets of the constitution. Without batting an eye, Duale placed the aircraft that the President uses to travel, on the same pedestal as the Presidential sword and Presidential flag just as he had been instructed to do.

Garissa Township ~ Aden Duale’s constituency ~ is the only Jubilee stronghold that has experienced the bizarre wave of insecurity that has swept across the country, but mostly CORD strongholds, and is said to be a manifestation of what sections of the government described as ‘business rivalry’. It is quite telling that this ‘business rivalry’ pits businesses with such names as ‘Kwa Chege’ against Muslim names. This has made the constituency the scene of a brutal security operation mounted by the KDF, GSU and other security organs that have visited upon his constituents rape, arson and death, that would make them think real long and hard in 2018before they can vote for any party with a horn as its symbol. Attempts to play the Al~Shaabab card flopped spectacularly because ~ as the locals argued ~ there are a lot softer targets for the terrorists than Garissa town. And it is only just 2013 May!

Is it by accident that it is the Nation Media Group ~ the TNA’s mouth piece ~ that is spearheading a campaign to paint Duale’s party boss William Ruto in the worst colours possible? It is doubtful. The last two cabinet slots are yet to be filled because the TNA wing wishes to appoint people that will help it fight Ruto, should he run against Uhuru in 2018, and Ruto is resisting the appointment of the MaDVDs of this world. TNA will ofcourse have the last laugh again and URP will have no option but to accept and move on, but will they draw any lessons from it? Only time will tell.

Evidence that the Jubilee boat is rocking violently is all over the place for those whose heads are not buried in the sand. I’ll stop here but not before quoting ~ bellow ~my friend Asafa Omoke who wrote this in reference to the chartered jet saga on the wall of the Facebook group Ukweli Kenya Talkshop.

â€œWhat URP doesn’t see is that the invoices and receipts were presented to The Daily Nation by “unknown persons” in a well orchestrated move to clip some hairs and wings. Now they are fighting facts and they are getting bloodily bloodied. Welcome ‘Nusu Mkate’ enthusiasts to the world of realpolitik. In the next few hours, MaDVD will be in the cabinet as will some Maasai. If not the cabinet will be expanded to 20-23 ministries and the tribes placated. First of all,who the hell is he to contradict The Kenya Paraffin and lamps when they need to recoup their funds? Who said they were friends and would wear the same color of clothes the President wears in public? Who is he to order troops ironically to Duales backyard when The President is out of the country? Who knows where he will order them next? The dye is cast, lets reap the colors.â€ https://www.kenya-today.com/opinion/aden-duale