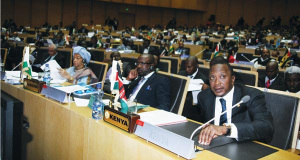 The ICC revolt by African leaders in Addis Ababa last week may not have been about the Kenya case currently being heard in The Hague. Perhaps it is more to do with the way the international community wants to use the institution for humanitarian purposes. ICC has not been a respecter of â€˜personsâ€™.

One of the key motions they discussed, was â€œWithdrawal from the international criminal court (ICC).â€ This resolution, wants the African Union (AU) to unequivocally declare whether or not it will work with the ICC. The draft resolution, moved by Uganda and South Sudan, requires the AU Commission to expand the jurisdiction of the African Court of Human and Peoples Rights and the African Union Commission on the International Law. In effect this would mean Africans would deal with transnational crimes and crimes against humanity here in Africa without involvement from outside Africa.

Previously, the AU had â€œexpressed its strong conviction that the search for justice should be pursued in a way that does not impede or jeopardize efforts aimed at promoting lasting peace and reiterated AUâ€™s concern with the misuse of indictments against African leaders.â€

The International Criminal Court (ICC or ICCt) is an institution acting as a permanent tribunal to prosecute people for war crimes, crimes against humanity and genocide. It has the authority to adjudicate on claims brought to it. So it works on a referral system just like a normal court, but for claims from all over the world. It has the power to prosecute for the crime of aggression (defined as a state using armed forces against another state, whether by invasion, blockade of ports and coasts, or even if one stateâ€™s armed forces were allowed into another state for a specified period and they surpassed that period).

The Rome Statute of the ICC is its founding treaty. It is the documented body of principles according to which the ICC operates. It describes its jurisdiction, structure and functions. According to the Statute, the ICC has the power of complementarity, meaning it can investigate and prosecute in states whose national court systems have failed.

Why would they want to withdraw from the ICC? Guessing is not difficult. Think of this. In January 1933 Adolf Hitler became German Chancellor. He withdrew Germany from the League of Nations in order to rearm. The rest is history. The League of Nations was at the time fixated on reaching an international disarmament agreement. The US President Woodrow Wilson hoped the League would ensure that the First World War truly was â€œthe war to end all warsâ€, but efforts to limit army sizes prompted the departure of Japan in March 1933 and then Germany a few months later.

Could it be that our leaders are trying to avoid scrutiny of crimes against humanity which have occurred under their watch? How could they fail to understand that they may still come under the ICCâ€™s authority? Its powers are designed to be effective under these three circumstances:
1. When a criminal is a member of a state party or any state that has otherwise acceded to the courtâ€™s jurisdiction.
2. When the crime was committed on a state partyâ€™s territory or that of a state that has accepted its jurisdiction.
3. When the court receives a referral from the UN Security Council.
Sudan is not a signatory to Rome statutes. Yet five of its nationals including their president, are inductees, reported by the United Nations Security Council. Ivory Coast has not ratified the Rome Treaty the basis of the court, yet Lauren Gbagbo their former president and his wife are standing trial on charges of crimes against humanity. Kenya involved the ICC immediately after the post election violence of 2007/8. Affirmed this latter in the saying lets not be vague, go Hague. Both Uganda and Congo referred some of their citizens to The Hague, indicating that these countries volunteered to work with the ICC.

Our leaders must be aware that the end of the Cold War inaugurated a period where the international system is marked by an increased prevalence of humanitarian interventions. In April 1999, Vaclav Havel, President of the Czech Republic, delivered a famous address to the Senate and the House of Commons of the Parliament of Canada in which he claimed, â€œHuman rights rank above the rights of states,â€ and â€œhuman liberties constitute a higher value than state sovereignty.â€

The NATO campaign in Kosovo in 1999 is often described as the paradigmatic example of these humanitarian interventions: it is revered as historyâ€™s first instance of a truly altruistic war. Even so the rationale offered for the military intervention and the means employed therein have been subjected to a plethora of criticisms. They are at the forefront of recent debates on global governance.

The doctrine and practice of humanitarian intervention presents a seemingly insurmountable dilemma in global governance: this dilemma is characterized by the tension between the primacy of state sovereignty and the protection of fundamental human rights.

Sovereignty no longer means that internal actions are beyond scrutiny. A state that oppresses and violates the autonomy and integrity of its citizens and subjects can no longer claim that sovereignty shields it from such scrutiny and â€œoutside interference.â€

Ursula Cherono is a 41-year-old Kenyan woman who is banking on the ICC for justice. On January 27, 2008, she was at home in Rift Valley Province when she learnt that a group of young men from another tribe were planning a retaliatory attack on her community. With her neighbours, Cherono decided to flee the area. Unfortunately, they bumped into their attackers and she was struck with a club on the back.

â€œSome 10 attackers remained behind and they raped me repeatedly, until I was unconscious,â€ she sobs. â€œI suffered an injured spinal cord, my leg was broken and my uterus was later removed as a result of the rape.â€ (Article, â€œinternational justice is Africa on trialâ€ Nation Newspaper April 4, 2012).

While victims of violent crime such as Cherono and human rights advocates appreciate the role of the ICC in international justice, some African leaders have been unimpressed by the courtâ€™s activities. They accuse it of placing undue emphasis on Africa.

Indeed, the European Court on Human Rights has frequently sided with individuals who press a human rights claim against their home state. And although Western protestations against Russian military action against Chechnya proved to be ineffectual, these protests and inspections at least affirmed the principle that no state actions that so clearly violates human rights is beyond international attention, even when these actions are represented as internal matters.

Of course, the chasm between international â€œattentionâ€ and effective action of prevention or enforcement is huge. The photographic images of a devastated Grozny haunts our collective conscience. Too many such images â€” from Srebenica, to Sarajevo, to Rwanda or East Timor â€” have crowded the landscape of sovereignty and international inaction.

Not even Dr. Pangloss could look at such pictures with satisfaction. As Judith Shklar has written in her remarkable essay, The Liberalism of Fear:â€œWe say â€˜never again,â€™ but somewhere someone is being tortured right now, and acute fear has again become the most common form of social control. To this the horror of modern warfare must be added as a reminder.â€

We are compelled to continue pressing for the notion that recognition of and respect for human rights must come before the principles of state sovereignty and non-interference. An egregious violation of human rights is no less so because it occurs within the borders of a particular state.

The deepening legitimacy of the ideas of human rights provides the context for Kofi Annanâ€™s assertion, as quoted in Jim Hoagland, â€œMurder in the Name of Sovereigntyâ€ (Washington Post, October 28, 1999, p. A33). The former UN Secretary continues: â€œToday, what is internal doesnâ€™t remain internal for very long. We have to examine our willingness to act in some areas of conflict while limiting ourselves to humanitarian palliatives in other crises that ought to shame us into action.

â€œWe have to find rational guidelines or an understanding of the spectrum on which the choices of intervention exist. We need a new consensus. The founders of the United Nations in 1945 came out of a World War determined to stop conflicts between states. The time has come for our generation to look at its responsibilities toward civilians who in todayâ€™s wars are deliberately targeted.â€

The African states are angry that the UN Security Council ignored the AU request to refer the ICC trials against Sudanese President al-Bashir and the Kenyan leaders to them. This action seeks to affirm Africaâ€™s sovereignty arguing that the ICC is threatening the independence of African states.

It is perhaps remarkable that an international diplomat of Kofi Ananâ€™s stature was able to promote an agenda that our leaders would find troubling, if not offensive. He surely understood this, while at the same time, he took more seriously the article that opens the Universal Declaration on Human Rights: â€œAll human beings are born free and equal in dignity and rights. They are endowed with reason and conscience and should act towards one another in a spirit of brotherhood.â€

The Declaration may now be more a statement of lofty aspiration than a list of enforceable rights in a world of conflict within and between sovereign states. But it defines our task to translate the norms of human dignity and rights into practices and institutions that can make these norms realities.

Adam Roberts, responding to the challenge of legality of such action, suggests that the UN Charter â€œleaves some scope for humanitarian interventions, â€œbut this is largely through indirect and subtle channels, which ought to be made more explicit. Therefore, since the doctrine of humanitarian intervention has no overt legal grounding in the UN Charter, it is necessary to examine the actual norms and practices of states in order to understand the evolving nature of the doctrine within the context of global governance.

The philosopher Immanuel Kant, at least, was confident that we human beings could do it: â€œThe human race,â€ he wrote in 1793, â€œhas made considerable moral progress, and short term hindrances prove nothing to the contrary.â€

Our institutions at the AU are too weak to respond humanitarian challenges in Africa today. Without power to restrain aggression from outside the African states and within them, there cannot be human rights. For now International institutions such as the UN or ICC remain the only hope for citizens. The world is committed to this and will not relent. This withdrawal effort is a zero sum.

Rev. Canon Francis Omondi
Anglican Church of Kenya,
All saints cathedral diocese .
(These are the authors own opinion not the churchâ€™s .) To read more of Canon Omondi’s views visist his blog http://waanglicana.wordpress.com/