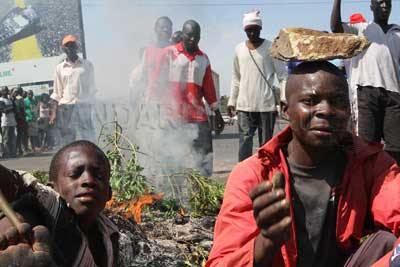 Are They Sick? Why Do They Behave Strangely?

On Tuesday April 2, 2013, panic mood engulfed a village in Migori County after a middle aged man committed suicide. It came after Prime Minister Raila Odinga confirmed Â that he lost the Supreme Court petition challenging the election of President Uhuru Kenyatta as the fourth President of Kenya. Â The man said he had no reason to live without seeing Hon. Raila Odinga as President. There has Â since been reported two more related suicides.
Judging from the fierce exchanges of comments I read from Facebook, there Â is no doubt that the outcome of this yearâ€™s election has triggered irrational reaction from many of us. On one hand disgust and curses, on the other great jubilation, mockery and sneering. Â  Â â€Sweet is the defeat of your foe than the victory of your friend,â€ Â so goes the saying. Â Many Â of those rejoicing, did so, more because Raila was defeated Â than that Hon. Uhuru won. This scenario could easily Â push us into the precipice of Â unending conflicts.

Why would someone die for political course?Â
The grief of Â people that voted Â for CORD is best captured by the eccentric Miguna Miguna: Â â€Itâ€™s not a feeling of entitlement and arrogance as most pedantic commentators have claimed; itâ€™s a feeling of alienation, frustration, and powerlessness. Itâ€™s not a symptom of â€œthe Luo Arrogance.In my view, itâ€™s a cry for help. A cry for inclusion. A burning desire to belong. To be accepted as full citizens and be able to ascend to any leadership position without resistance and stumbling blocks.â€™
So those big men crying, like babies, are not angry. Â They are frightened about tomorrow. A fear informed by their horrendous past. Vivid atrocities of yesteryears ; the suppression and human right violations and the impunity of the countryâ€™s two longest regimes; poverty born of intentional skewed distribution of national resources, Â in favour of regions in power.Â
Could Â what professor Â Miroslav Volf, a Croat, Â said about the trigger of the Â conflict in Yugoslavia pitching Â ethnic Â Serbs , Croats among other protagonists, shed some light for us? The explanation that reactions and expressions of pain today are built on past pain. He said :â€As long as it is remembered, the past is not just the past; it remains an aspect of the present. A remembered wound is an experienced wound.â€
Deep wounds from the past can so much pain our present that, as Toni Morrison puts it in Beloved, the future becomesâ€œa matter of keeping the past at bayâ€.
One would not rule out that the, Â so many stories, trajectories of scattered lives, of many Kenyans, chance coincidences punctuated with heartbreaking missed opportunities, tears and a kaleidoscope painful memories shared, stories that made people bitter. These were narratives the youth in this country and not only the Â Luos grew up with.
They were partly responsible for the palpable rage one notices as they throw rocks and riot. Â This bitter past is shared Â in their leaderâ€™s Â plight. Whenever Odingaâ€™s political ambitions are threatened or thwarted they are pained. For in him resides a charisma and a drive to change that past for the better. Â To such a charismatic leader they would give their all. Â Such leadership is characterised more by movement and revolution for it is a means of overturning traditions and laws in favour of an entirely new social and political order. Which is why the emotional Â bond Â with followers becomes Â necessary â€“ Â a leadership that influences followers to commit to it is charismatic leadership and not buying them out with freebies.
Â

Is kenyaâ€™s democracy evolving ?
Â Our Â fragile democracy ought to have taken a different trajectory than this. We Â are deeply tribalised. Tribes Â with numbers and access to power and resources would always win.
If we are to mature our democracy, we must heed the warning of Prof Alan Â Wolfe; the history of modern democracy is one of ever expanding inclusion, itâ€™s about taking inâ€¦ Rather than keeping out â€¦ He further observes; â€œOnce upon a time, it is said, such societies were ruled by privileged elites. Governing circles were restricted to those of the correct gender, breeding, education, and social exclusiveness. All this changes as a result of those multiple forces usually identified by the term democracy. First the middle classes, then working men, then women, then racial minorities all won not only economic rights but political and social rights as well. (Wolfe 1992, 309) .
It becomes condescending and wrong to exclude anyone interested Â from playing a role. Until then, two weeks ago, Â I had only read it on internet the hostility with which Hon. Raila was viewed. I got stung Â when a friend told me to my face ;â€â€¦Raila can never be president of Kenyaâ€¦ You Luos should give us someone else.â€ Â Why not him ? Hon. Uhuru made it clear to the world Â during the campaign period, that the choice of Kenyans leaders was a prerogative of Kenyans and the western world leaders Â should keep off.
Professor Volf again is articulate when Â he observes that, â€œSymbolic exclusion is often a distortion of the other, not simply ignorance about the other; it is a wilful misconstruction, not mere failure of knowledge. We demonise and bestialise not because we do not know better, but because we refuse to know what is manifest and choose to know what serves our interests.â€
It was great and honourable for Hon. Raila to endorse and support President Kibakiâ€™s candidacy in 2002. He was â€˜Jambaâ€™ for bringing Â down the invincible Kanuâ€™s hold on power. But he became evil in an attempt to be president himself.
Â

Leadership to inspire a united KenyaÂ
Miguna missed the point in deifying Railaâ€™s in his supporters eyes. Nowadays, whenever they attend their deity Raila Odingaâ€™s functions, the mob responds to each and every word he utters with â€œYes, Babaâ€. In liberation politics, the emotional and psychological investment needed on the part of the followers is very high â€“ it can last for a while but eventually must wear out.
In a broadcast in 1936 Dietrich Â Bonhoeffer spoke on the young peopleâ€™s view on the concept of leadership, he said: â€œSince the Great War (1914-1919), the youth of our nation has worked to establish an identity of their own Â different from the other generations Â â€¦ like in the concept of the leader â€¦. In any generation the people give the leader his authority over them. The leader often becomes the embodiment of their dreams, aspirations and ideals â€¦ In exchange the leader may expect unconditional obedience , such obedience may not be a bad thing as long as it serves a good causeâ€¦.â€
It is irrefutable fact to both friends and foes Â that, Hon. Raila exploited this Â loyal support to the benefit of our nationâ€™s political changes experienced recently.
The new constitution promulgated in 2010 gave great hope that the country will move forward from her ghostly past of inequalities, occasioned by Â exclusion of other communities Â from the centre on issues of Â governance and resources allocation. It pointed to a liberated space of being a Kenyan. Knowing that some in this new government were opposed to it and the lukewarm approach towards its full implementation seen recently there is little hope that the constitution will deliver its promise!
Having power now, your guess will be as good as mine on whether the ideals enshrined in the constitution will survive the Â onslaught of the dominant ideas against the pressure of the underprivileged . The most seminal impact of envy consists â€¦ in transforming â€œthe ideas of the dominantâ€ into the â€œdominant ideas.â€ Once the link between the privileged position and certain values has been socially constructed, the disprivileged are prompted to seek redress for their humiliation through demanding such values for themselves-and thereby further enhancing those valuesâ€™ seductive power. (Bauman 1993,216).
Will our new government uphold the letter and the spirit of our constitution?
No healing is required as they are not sick. Volf Â states that, â€œPsychological wounds caused by suffering can be healed only if a person passes through the narrow door of painful memoriesâ€.
Yet baffling that one would die for this!
Rev. Canon Francis Omondi
Anglican Church of Kenya ,
All saints Cathedral diocese
5th April, 2013