Recently, the Kalenjin nation has been inundated with battle cries of freedom and redemption that has come to be code-named Operation Achicha.

Achicha Wendi KityoÂ (no to the Uhuru- Ruto Coalition – you are going alone to Mt. Kenya) is a movement of the youth and elders, the dissenting group that has come to the realization that they wonâ€™t be herded like goats to a shed in which they believe resides a lion that will terrorize them once in the shed. 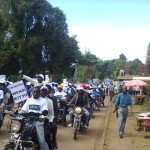 In the movement I see a crisp of change, which like a grain of salt, the visionaries within Rift Valley and eventually the rest of the nation will continue to aggregate and crystallize around.

Without a doubt, Achicha is destined to grow into a national movement. Achicha appears so much like the Iowa movement of 2008 US election which turned out to be the springboard that catapulted Obama to White House against Hillary Clinton.

Even though a Kalenjin word, turns out Achichaâ€™s the greatest threat to the tribal politics of zoning. Achicha marks the end of the era of the ethnic chieftain. As such it elevates our nationhood to the next level.

Itâ€™s the paradox that teaches us that words in whichever tribe or dialect can be powerful, that the potent energy of ethnicity can after all be channeled for the good of the nation and instead become a panacea to an oppressed diverse population.

Achicha is the mjinga akierevuka story of a population that has for years been taradiddled that diversity is the root of the stench of their neighborâ€™s breath rather than the source of our nationâ€™s strength and wealth.

It is the culmination of a people who are saying that just like the black Americans declined to take the back seat during the Montgomery Bus Boycott, so arenâ€™t the Youth and the elderly in the Rift Valley ready to relinquish their inalienable right to self determination to a selfish leader looking out for himself to determine the destiny of their community.

The echoes of The Achicha movement isnâ€™t just about us who reside in The Rift Valley, but is an issue based movement that will reverberate across the rest of the nation and whose spirit isnâ€™t just confined to the backyard of great Kenyan revolutionaries like Jean-Marie Seroney, Chelagat Mutai, Alexander Kipsang Muge and Koitalel Arap Samoei.

Itâ€™s a movement that says no to dictatorship, itâ€™s the incredible story of a group whose voices are about speaking out against being given Mohammed Morsi like decrees as to which political pact to entrust their futures on, the story of the Kenyan youth who have come of age and can now look at his ethnic chieftain in the eye and tell him Achicha Wendi Kityo- No, you will go to the Ostrich Mountain alone.

The fact that I learnt to say Achicha from a Professor of Kalenjin descent in the diaspora who just 2 years ago convinced me that the Kalenjin nation will never look Lake Wards, is a testament that Achicha is now a concept that is now well engrained in the minds of theÂ top-de-la-crÃ¨me of the Rift Valley opinion leaders.

The Professor who has been a major donor to URP said â€œthat when the choice is between swimming in the Lake and hiking a mountain in a Very Hot Monday Afternoon, the choice becomes so clear and distinct, without any tricksâ€.

â€œAnd when confronted with stark choices like thatâ€ he continued â€œeven a 5 year old knows what to do; itâ€™s just a reflex response to jump into the Lake to swim. Political Temperatures in the Rift Valley are at record high, and the community needs a swim on the Lake. Rashid, we are not push-oversâ€.

Itâ€™s a common concept taught in Social Communication that the entry point of an idea to any society is the opinion leaders like teachers, professors, and the council of elders and you can agree with me, that the Achicha Wendo Kityo is a movement that is doing well at this stage of the social communication process.

The people that the masses listen to- the opinion leaders- have said Achicha and when that happens then you have a cycle that you canâ€™t break. Achicha has all the hallmarks of a cycle that will run its full course. The end state is a Peopleâ€™s President. No Diggity, no doubt there.

That is the same principle upon which Obama mania was built upon- where the Kennedys, Oprah Winfrey, The Hollywood, The Military establishment offered direction to the people and the nation listened, and like a joke, the first Black President took White House- and a similar strategy seems to be very much on course in the bread basket Province.

The writing is on the wall Mr. Moneybags a.k.a Kamwana the Prince and his new found boot-licker a.k.a. The Hostage will be rejected in the North and South Rift.

Achicha will with no doubt deal the last blow to this gang which like another analyst insinuated has with impunity â€œkidnappedâ€ Ruto and continue to hold him hostage using threats of giving evidence to ICC if he doesnâ€™t sign a pre-election pact.

No diggity, no doubt that Achicha wants to deliver Ruto from the jaws and claws of the Ostrich fed lion but you can only offer water to a cow, you cannot force it to drink it. Ruto can either embrace the Achicha movement or be prepared to be swallowed by it. Time is fast running out.