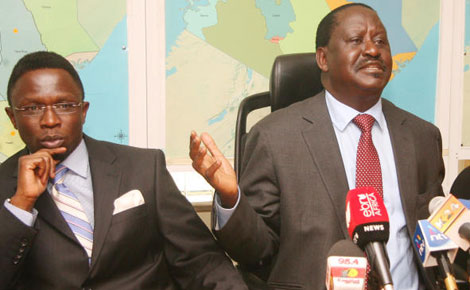 The die is cast. Ababu Namwamba is out of ODM. Like before him, Ababu is using the same script that was used by Ruto, Balala, Nyaga, and Mudavadi. History is therefore repeating itself.

Ruto, Balala, Nyaga, and Mudavadi were all given time to do maximum havoc to the party in the name of allowing internal democracy while in the real sense their loyalty was elsewhere. ODM leadership should NOT REPEAT the same mistake of the past by providing Ababu with a platform to recruit, destabilize and acquire weapons of mass destruction for his final assault on the party at the last minute around general election time.

The longer Ababu stays in ODM the more time he gets to accomplish his mission – destabilization of ODM to the maximum. ODM leadership must not allow Ababu even one more day to organize by inciting party members against its leadership.

Ababu is not invaluable. Ababu thinks that he is extremely useful and indispensable. That without him ODM will collapse as soon as he leaves. Ababu must be reminded that he came to ODM not the other way round. ODM never went to Ababu. Therefore, Ababu must be allowed to leave ODM immediately to send a strong signal to those harbouring such sinister motives against the party that ODM is an institution and is bigger than any one single individual.

Those who can remember know for a fact that I was an adent supporter of Ababu Namwamba. At one time I even threatened that if Ababu is barred from contesting, the Secretary General’s position, I would withdraw my support for ODM. This was before I knew the facts that Ababu is actually acting on the behest of the opponents of ODM.

Those who see no danger in Ababu becoming the Secretary General of ODM are not conversant with the history of Kenya’s politics since the advent of multi-party following the repeal of section 2A. Those of us who have been around for long know what Martin Shikuku did to Jaramogi Oginga Odinga as the Secretary General of the Forum for the Restoration of Democracy (FORD).

After eating ugali in State House Shikuku ran away with the certificate of the party since as the Secretary General, he was the custodian of the certificate. It was a very sad moment for Kenyans and Kenya. ODM supporters, therefore, will never allow Ababu to do Shikuku on Raila Odinga

Ababu’s reunion with William Ruto is inevitable and long over due. They have a history dating back to Maize scandals when Deputy President was Ministar for Agriculture. It is time village party like URP or TNA who bank roll Ababu Namwamba gave him the position of Secretary General in either both or either of the party. His departure will not affect the support base of ODM. He is an insignificant following in Luhyaland as he is properly checked by Hon. Paul Otuoma in Busia politics.