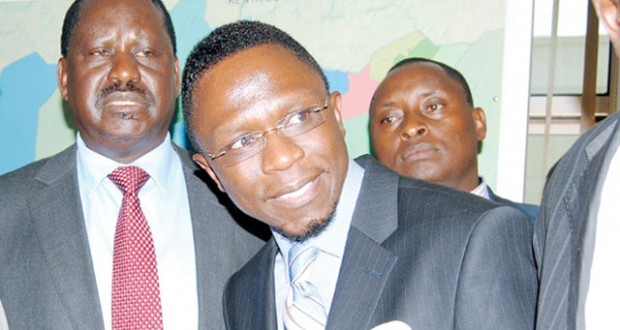 Ababu’s Political Treachery at its worst!

Last night the treacherous MP for Budalangi Hon Ababu Nawmwamba hosted some politicians and aides of DP William Ruto at the Laico Regency in Nairobi.

AGENDA was to explore which questions can be introduced into the referendum ballot paper that will work to frustrate the CORD leadership. This falls very much in line as to why Ababu rushed to sign the referendum petition book at Ufungamano earlier this month.

The conclusion here is that Jubilee have resigned to the fact that the referendum will happen and that the YES side will take the day. Their only recourse is to introduce questions that will counter CORD, using greedy ODM MPs like Ababu Namwamba.

In a public lounge of a five star hotel Ababu’s own words were that the referendum questions must include one that caps the presidential age at 65 years old. Really, Mr. smart lawyer, do you build national constitutions for individuals or for posterity?

As DP Ruto’s hatchet boy in ODM, Hon Ababu further suggested that former Lugari MP Cyrus Jirongo should be drafted to campaign for this in Western vote basket. Laughable I say!

A plot is further revealed in which Ababu Namwamba is financing the erection of a few referendum signature collection tent somewhere in downtown Nairobi. A nice way to sabotage the CORD is to join them.

To add insult to injury, instead of using his Continental House office that was given to him as MP for Budalangi to serve the interests of Budalangi, Hon Ababu uses this office to host URP delegates, and a few deluded ODM youth. Those meetings happen nearly every other day in the evenings, where handouts are distributed to greedy youth. some Budalangi constituents spend hours, sometimes days outside the gates of continental house without ever securing an appointment to see the full of ego Namwamba.

It is not only foolhardy but the peak of self illusion for Hon Ababu to believe that he can actually lead a revolt within ODM. We know and are very much aware of his selfish and amateurish conspiracy moves.

Instead of honourably resigning and crossing the floor, so as to provoke a by-election process in Budalangi so he can be re-elected on URP ticket, Hon Ababu remains the mole within determined to serve out the remaining of his colourless tenure as MP. Heart bleeds for the residents of Budalangi. DP William Ruto has actually hypnotized their MP with money and other things, but this is a story of another day.

The distribution of ill-gotten largesse through endless countrywide harambees cannot be development. This is what Ababu wants to mesmerize the people of Western with. I remind him there are very few fools in Western region of Kenya!