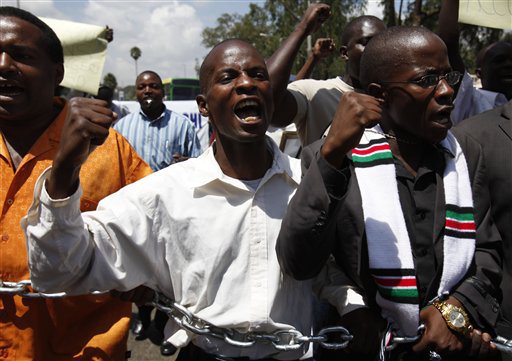 Who Will Bell The Cat?

By Patrick Gathara via Gathara World

Less than three years after we promulgated a new constitution, meant to herald a new era of democratic governance,Â our polity is facing a severe crisis of legitimacy. Today few KenyansÂ believe their MPÂ represents them. Half the country thinks the presidential election was stolen and the revelations of IEBC incompetenceÂ threatenÂ theÂ credibility of the entire March General election. Untrammelled rent-seeking by the new county authorities and petty arguments over the appropriate manner of addressing housing and transporting governors and their wives are making a mockery of devolution. We are now the fourth most corrupt nation in the world.

I think we may be seeing the consequence of aÂ deficit inÂ accountability. We are already well past the point at which our shamocracy pushed honesty and prudence out of public office. Now that the thugs and tribalists have taken over, they are systematically deconstructing our national identity and replacing it with ethnicities. This fracturing of identity makes it much harder for the people to mount collective action to punish thieving elites.

One of the primary ways (by no means the only one)Â the masses canÂ enforce accontability is through elections. But we live in terror of elections. And with good reason. Elections work, when governments are evaluated on their performance, andÂ when citizens watch whether governments keep their promises, and oust those that donâ€™t measure up. Such accountability improves the provision of public goods, boosting incomes and welfare and reinforcing the sense of national belonging.

However, in poor and diverseÂ societies such as ours, electoral competition undisciplined by accountability andÂ enforced rules curtailing scope for cheating as well as constraints on the exercise of power,Â can be very dangerous indeed.Â Politicians are evaluated on their propensity for patronage, furtherÂ polarizing the fractured identities and leading to higher risks of violence.

We don’t have to look far for examples of what happens when we stay on the road we are on. Cote D’Ivoire and Somalia have been through this. The former was once Africa’s economic miracle and is now a basket case. The latter is one of it’s most ethnically homogenous societies, which has been tearing itself apart for more than two decades. We ourselves had a taste of it in 2007.

The lack of accountability and fracturing of the national identity is the road to hell. It is why we are deathly afraid of elections. When accountability for the deaths of 1500 Kenyans is swept under the carpet in the name of a fake reconciliation, when we elect thugs to public office and turn a blind eye to electoral malfeasance in the name of peace, we are just storing up further troubles down the road.

It is also proof positive of the hollowness of our democracy. A free people shouldÂ have no reasonÂ fearÂ electoral contests.Â And to the extent that we do, we are neither free nor a people.

So what is to be done? The politiciansÂ will notÂ fix it. Their unrestrainedÂ greed for power and prestige is a big part of the problem. Also, the president and his henchmen do not want to broach the issue for fear of having to acknowledge that their victory is stained. None other than the Deputy President has openly declared that the IEBC, despite its manifold failures, did a “fabulous job.” Presumably he meant in installing the ruling clique’s preferred candidate. In Parliament, a similar reluctance to highlight the problems springs from similar motivations: impugning theÂ integrity of the system impugns the legitimacy of all incumbents. It was telling that when calling for reforms, the opposition CORD alliance threatened to boycott the next General Election. But that’s in five years time! The system needs to be fixed today.

No. We have to look elsewhere. And we have a ready example from our recent past. It was a coalition of civil society, churches, media and disaffected politicians which mobilized the Kenyan people and the international community to stand up to the Moi dictatorship in the 1990s and to demand accountability. This coalition can be re-formed. But for that to happen, we need to shake off the fear and ignorance that seems to infect its parts.

Civil Society must come outÂ from hiding and find the courage to speak out. The media mustÂ rediscover its core function of informing the public. The lobotomising of the news must stop and journalists should go back to being newsmen and not performing monkeys. The church (and the mosque) must rediscover their moral centres. And politicians must reacquaint withÂ principle. Most importantly, the silence must stop. If this is done, then the people and the international community will regain their voice, just as they did twenty years ago and force reform on the elite.

But all this takes courage. It takes leadership. So the question is: In a nation where we have turned men into mice, who will bell the cat?

This piece was first published in this blog; Gathara’s World http://gathara.blogspot.nl/