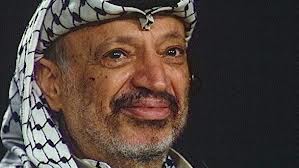 This article titled “France opens murder inquiry into Yasser Arafat’s death” was written by Angelique Chrisafis in Paris and agencies, for The Guardian on Tuesday 28th August 2012 18.15 UTC

French prosecutors have opened a murder inquiry into the death of the Palestinian leader Yasser Arafat in Paris in 2004, to determine whether he could have been poisoned with radioactive polonium-210.

Arafat’s widow, Suha, lodged a legal complaint for murder last month and the French public prosecutor has now accepted that an inquiry can take place in France, led by an investigating judge.

Arafat died in a French military hospital aged 75. He had been transferred there from his headquarters in the West Bank after his health deteriorated.

French doctors have said he died of a massive stroke and had suffered from a blood condition known as disseminated intravascular coagulation, or DIC. But the records were inconclusive about what brought about the DIC, which has many possible causes, including infections and liver disease.

Allegations that Arafat may have been poisoned emerged immediately after his death and the claim was revived by Al-Jazeera TV last month, following a nine-month investigation. Al-Jazeera said it was given access to a duffel bag of Arafat’s personal effects by his widow. A Swiss institute detected that the belongings had elevated traces of polonium-210, the rare and highly lethal substance which was used to assassinate the Russian dissident Alexander Litvinenko.

But the institute said the findings were inconclusive and that Arafat’s bones would have to be tested to get a clearer answer. Scientists warn that polonium decays fast and an autopsy needs to be done quickly.

The Palestinian authority last month gave the green light for Arafat’s body to be exhumed in Ramallah, but no date has yet been set.

Abdallah Basher, who heads a Palestinian medical committee investigating Arafat’s death, said of the Paris murder inquiry: “Any step aimed at revealing the truth about Yasser Arafat’s death is good.”

He said experts from the Swiss lab would travel to the West Bank in the next few weeks to take samples from Arafat’s remains even though the matter of his exhumation is still in limbo. Arafat is buried in a mausoleum in the walled government compound where he spent the last three years of his life under Israeli siege.

Although Palestinian officials have long accused Israel of being involved in Arafat’s death, Israel has denied those charges.

“It’s not really our concern because the complaint is not lodged against Israel,” the Israeli foreign ministry spokesman Yigal Palmor told Associated Press. “If there is an investigation, we hope that it will shed light on this matter.”

Suha Arafat’s legal complaint did not name a responsible party, a common practice in France.