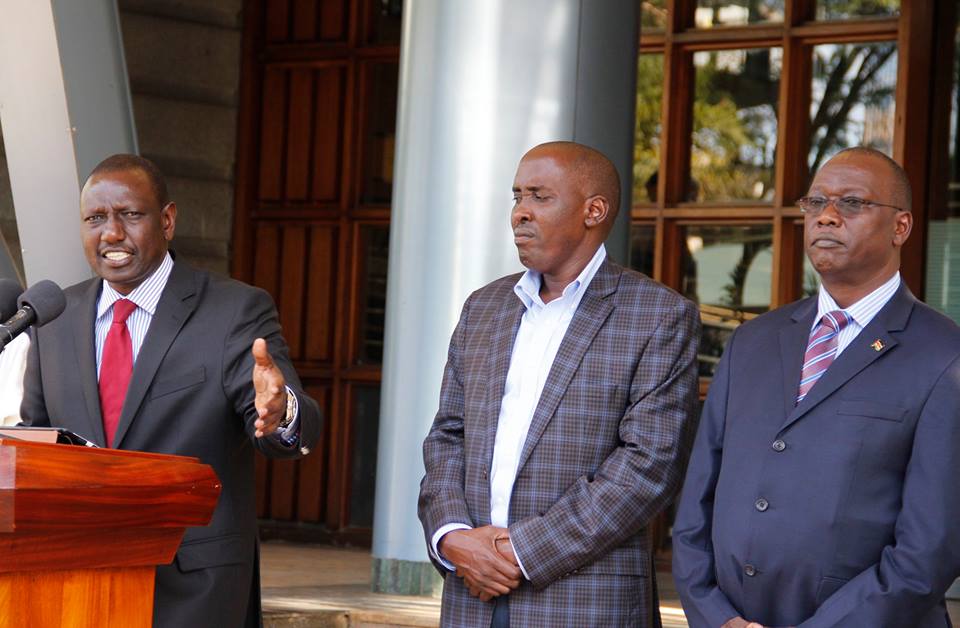 STATEMENT BY H.E. WILLIAM RUTO, DEPUTY PRESIDENT OF THE REPUBLIC OF KENYA, IN THE LIGHT OF THE TERROR ATTACK ON A BUS IN MANDERA ON SUNDAY 23 NOVEMBER 2014

Another moment of grief and outrage is upon us and we must as a nation arise from it.
I join you, this afternoon, on behalf of the President, to mourn the untimely and senseless murder of 28 innocent Kenyans at the hands of terrorists and bandits in the early hours yesterday in Mandera.

I extend deep condolences on my own behalf and that of peace loving Kenyans from every walk of life and faith.
The Mandera incident is an abominable and painful blow to the families of the departed and our nation. As we mourn the fallen, I restate the Government’s commitment to assure the safety and security of every Kenyan wherever they are, at all times.
Following the Mandera Bus attack, our security forces swiftly initiated response. They identified, followed and struck the perpetrators of these heinous crimes.

Two successful operations were carried out against the perpetrators of these murderous executions across the border. Our retaliatory action left in its trail more than 100 fatalities. It also destroyed four technicals and the camp from which this crime was planned.
Our message to them is clear; you may sneak and attack innocent civilians. But for any attack on Kenya and its people, we shall pursue you wherever you go.

This rapid action is itself a huge victory against regional terrorist networks. It emboldens us to ultimately deliver our promise to secure our citizens against internal and external aggression.

I commend our security agencies for their continued efforts to protect our people and country. They continue to improve their anti-terrorism capability and have detected and prevented numerous plans and attempts against our people, buildings and installations.
The Government assures Kenyans of unrelenting vigilance, swift and decisive response to any threats to our people and territorial integrity.

I implore all Kenyans to unite against our common enemies, both within and without who are intent on damaging our shared destiny through words and deeds.

As you are all aware, we continue to be a target of international terrorist groups and their affiliates. Following the Mandera attack, claims were made, by no other than the Al Shabaab that the atrocities visited upon the innocent citizens were a retaliatory attack against the alleged take-over of mosques by the security forces.

This claim is false. Our security forces have not taken over any mosque and the Government has no intention to take over any religious institution. However, as all Kenyans are aware, for sometime now houses of worship, and more so mosques, have been turned into turned into planning and logistics centres for Al Shabaab affiliated gangs.

A number of Kenyans, including four imams have lost their lives in attacks planned and executed through these unholy alliances and conspiracies thereof. Many others presently live in fear owing to threats made to them from the mosques by criminal gangs.
Between 17th November and 21st November 2014, the security forces, guided by sound intelligence launched coordinated operations on four mosques, which had been taken over by radicalized gangs in Mombasa.

These operations confirmed the nationâ€™s worst fears: that the houses of worship had been converted into armouries where guns, grenades and bomb-making materials, crude weapons including machetes and knives, radicalized propaganda literature and Al Shabaab insignia including flags not holy books and manuals for guidance unto light, were stored.

Dear Kenyans, no faith prescribes the use of houses of worship in this manner!
It is completely unacceptable that would-be holy places can be turned into battle pavilions and holding grounds for artillery meant to inflict injury, suffering and death to Kenyans.

This is the perversity of terrorism. Its perpetrators have no qualms desecrating places of worship, religion and the God they claim to embrace. Surprisingly and in spite of this discovery, some people, even elected leaders, have abdicated their responsibility.
Instead of supporting the Governmentâ€™s clean up operation, they have chosen to castigate the Security Forces, these people cite the constitutional guarantees for the freedom of worship and claim that the security forces have violated this right.

I must remind everyone, including these persons, that there is no constitutional provision that guarantees contemplating and planning to harm any Kenyan or persons within the territory of Kenya. The rights and privileges provided in the constitution come with responsibility.

Our security forces will stop at nothing in their duty to pursue terrorists and their accomplices wherever they are.
As far as law enforcement is concerned, a church, synagogue, mosque, shrine or any other place of worship becomes a scene of crime once it is used for criminal activities.

Therefore, any place of worship that wilfully hosts terror platforms disqualifies itself from the sanctity of a place of worship.
Unfortunately, it is clear that there are some people among us who sympathise with, harbour, facilitate and defend terrorists and their activities.

These individuals quite regrettably continue to whip up emotions amongst communities, and to offer terrorists and their sympathisers the false comfort of civil rights protection.

Leadership comes with accountability. Community, religious and elected leaders have a duty to defend the legitimate interests of their constituents, but not to destroy the pillars that bind us together as a nation.

Every leader must take full responsibility and address the fundamental questions. These questions are:

How did our mosques become caches of arms?
How can it be that our religious leaders are ejected from the houses of worship?
When and why did our houses of worship become platforms where clarion calls for the death of other Kenyans are made?

The Government takes great exception to this type of leadership that promotes hate-speech and incitement of Kenyans and will hold those responsible accountable for every utterance and action that promotes disharmony and war-like activities.

Once again, I commend the security forces for cleaning up these places of worship and urge the communities involved to hasten the formation of responsible structures that are accountable to the greater good of our nation to take charge.

Once again, let us remind ourselves that security is the responsibility of each and everyone of us. Our unity and collective responsibility is our best defence against all threats and challenges.