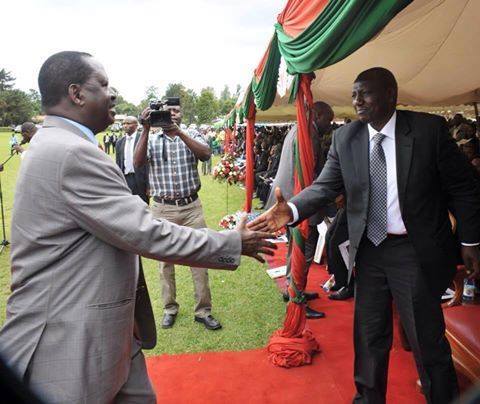 Kenyans were shocked to see images of William Ruto getting emotional as he rose from his seat to welcome Prime Minister Raila Odinga at the burial service of former trade unionists and KNUT chairman in Kericho county.

Ruto despite his number position in government stood to receive his senior and political mentor Raila as he made his way to the VIP,Ruto is seen being overwhelmed with emotion and could not not even stand properly. It was not immediately established if the URP boss and Jubilee strongman shedding tears was as a result guilty conscious for the alleged underground machinations that Uhuru regime has undertaken to eliminate the CORD leader from the political scene.

Although many credit retired president Moi for Ruto’s rise in politics, it is an open secret that it was the rt hon Raila Odinga who encouraged Ruto to seek presidency in 2006 in a bid to free the Kalenjin vote from Moi’s grip who at the time was gravitating towards then incumbent president Mwai Kibaki.

The reluctant Ruto took Raila’s advise and hit the ground/Kalenjin land soliciting support for the 2007 presidential elections. One year later Ruto hit the glass ceiling and went on to deliver the Kalenjin vote to ODM as a member of the Pentagon…..the rest as they say is history thanks to the dogs around Raila Odinga and the NSIS for making causing a lift between Ruto and Raila and thus letting the country go the ….?

So, yesterday Ruto might have flashed back to 2006/2007 the day when Jakom told him ‘yes you can !’ and ofcourse thanked God for Raila’s kingmaker genius but then felt guilt of his actions (teaming up with Uhuru and NSIS/IEBC and KDF to deny Raila victory in the 2013 general election. Ruto knows all the behind scenes event in the run-up to 4th March 2013 general election and during the Presidential Petition hearing.

As a hypocrite born again christian a moment hits you when you know HUWEZImake to heaven if you are part of the evil worldly cartel and yes that is the source of the emotions, a source of tears at a funeral of a stranger but in Raila’s presence! 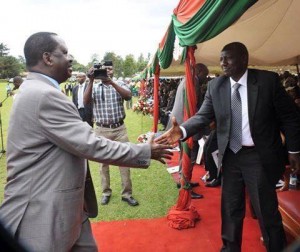