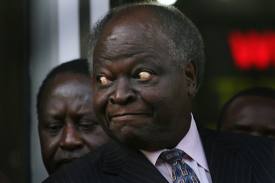 A man who could not accept defeat in elections. A man who watched Kenya burn. A septuagenarian who could not return a political favour. A man whose economics has been described as ‘voodoo’. A man who ensured Kenya remains a divided nation to date. Mwai Kibaki, if you listen to people’s conversations, especially those not of his ethnic group, is an old thankless tribalist who nobody misses yet many people want him to live longer, and grow older in misery and health, but retain his wealth for his children and grandchildren. He is not known to give to charity!

The famed ‘mavi ya kuku’ presidentâ€™s omissions gave our country a bad reputation outside Kenya. Today, we are the best example of a stable failed system! His tribal henchmen, many who came to power in 2002 without much property or ‘development record’ to show are today rumoured to be the wealthiest in town. A person who was elected to end one tyranny, he left statehouse after a decade having created a more bizarre monster-a highly unequal and economically unstable society.

“Huyo mtu ana roho nyeusi sana,” remarked William Ole Ntimama, Kibaki’s peer and a legendary defender of Maasai rights. To have a fellow old man make such scathing attacks on your person is to say the least, sad! But Mwai Kibaki deserves no legacy outside the official lies by his circle of friends and henchmen who now control most sectors of the government, mainstream media and country’s industrial machine. It was precisely this same reason which allowed ethnic fizzures to culminate into the orgy of 2007 post-election violence; an event which officialdom has shielded Kibaki from taking full responsibility and, or historical burden. As Ole Ntimama alludes, these sad events are what the current generation needs to continue basing their fight for justice on – history shall never be cheated eternally!

Ntimama argues that Kibaki amassed enough personal wealth from public coffers, yet still could not muster the moral courage to reject an outrageous allocation of huge sums of money to built him another office, despite the fact that his contribution to any meaningful progress in the country’s future is only a fantasy as at now.

“He has few friends and (he) was a silent dictator. He had no interaction with Cabinet ministers.Â He is a self-seeker and out of touch with the common man,” Ntimama noted

The old man from Maasailand, revealed that the Grand Coalition worked ‘inspite of’ Kibaki. He informs us that Kibaki is a man with few friends, a selfish man who could not entertain women singing in state-house, despite taking over from Moi who was popular with ordinary folks. This assertion may be useless to those high on ‘digital opium’, but it says something fundamental about ‘what the African culture’ was back then, ought to have been today, and probably remain so through the future.

While Ole Ntimama thinks Moi was whimsical, to Kibaki, he apportions the sadist tag. He took power by people who polled most ‘optimistic’ in the world, the law forced him to leave power this year, sickly clutching on a stick, on a people another poll found ‘extremely unhappy’. He slowed the country as nature, the mother equaliser of the conditions of men, humbled him.

Kibaki oversaw an economy which constricted chances of upward mobility based on meritocracy, and re-introduced institutionalised ethnicity in public service in ways which made Moi appear godly. If President Kenyatta is toiling with a country deeply divided, and a people highly suspicious of themselves, and a failing public sector system, it can only be said that he inherited a lot of ‘filth’ from his predecessor.

The man whom taxpayers build a sprawling mansion somewhere in Mweiga Farm, a monument which best captures the most perfect definition of ‘ethnic impunity’, ought to live the last few days of his comfortable life facing Mt. Kenya only. He was bad president, a tragedy.