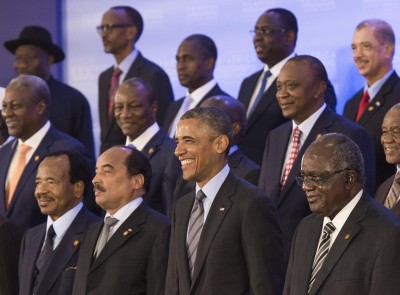 “Never before in the field of human politics did one man invite so many for too little” -Â DisappointedÂ Kenyan.

In various capitals of Africa whose strongmen stood side-by-side, grinning jeeringly, even disdainfully, past the American cameraman taking the snapshots, straight into the minds of millions of petrified citizens back in Africa, President Barack Obama and wife Michelle stood out like the harmless tip of the deadly iceberg that sunk the Titanic.

Photo after photo, whether beside Â Equatorial Guinea’s Teodoro Obiang Nguema Mbasogo, orÂ Salvar Kirr of South Sudan,Â Obama smiled, Michelle smiled, depicting that quintessential American hypocrisy in the smile – what an old African-American from Cincinnati City, Ohio, told me about the American smile – to be precise – white America smile.

“They [whites here] can be friendly to you, but they [whites here] are not your friends,” poured out the greyed old man, whose barber shop hung his own photo, then an energetic young man, marching on Washington, singing ‘we shall overcome’, in the civil rights summer of 1963.

In a continent where poverty is not much a result of Chinese exploitation than elite African corruption, Obama invited to the White House some of the grandest examples of Africa’s sleaze tragedy, making a mockery of his own message, a week earlier, Â to young African student leaders on his own inspired Mandela Fellowship – YALI.

Every smile, Obama should know, sent shivers in the crestfallen hearts of human rights activists and other players in Africa’s civil society and political opposition parties.

It is the effect on the first two entities – human rights and civil society organizations – that Obama’s US-Africa summit has utterly destroyed. Decades of work, decades of maimings and gun-shots and disappearances on resilient civil society and other human rights bodies were luxuriously washed down in Washington DC with American wine after sumptuous meals, served inside ‘free world’s capital’ of human rights and democracy – the White House.

Like the captain of the doomed Titanic, did Obama see it? That’s the question.

Unlike DC, where a handful of the most daring of African civil society protested Obama’s open endorsement of some of these African despots, and got bare press coverage in certain media, across African capitals of these strong men, mainstream media outfits, many owned by ‘business moguls’ who themselves bloated the entourage of these same leaders to Washington, leading stories and accompanying photos have splashed the Obamas and their African guests – torturers, homophobes, embezzlers, killers the list is endless.

Here in Kenya, newspaper front pages and TV broadcasts have been filled with stories of ‘diplomatic victory’ by President Uhuru Kenyatta, a man already dreaded by journalists and bloggers alike – for his regime is unfolding as another despotic, ruthless hegemony of a select elite of his own tribe, and that of his deputy William Ruto,ready to silence any critic or dissident. The Â newspapers have sold this belated final endorsement by the United States of America which only recently an emboldened President Uhuru, after ganging up with other AU strongmen and several other alleged despots around the world, aptly referred to as anÂ ‘arrogant world police crippled by shambolic domestic dysfunction’.Â

There is a lull in the African democratic atmosphere, a feeling of loss on what to do, from the Gambia to Angola to South Sudan to Ethiopia, of what will become the hard work of making Africa a place where China, and now America, not only use to enrich their empires, but strengthen to serve its own people.

As the Ethiopian human rights activist Obang Metho quipped, “now he is sitting with strongmen,where are the strong institutions?”

One thing is true for sure, the sense of narcissistic entitlement to power and politics of their own countries has been heightened by this odd act by an American President of African descent whose own father lived in a continuing African squalor because of the excesses of most, if not all, of the men he, Barack Hussein Obama, fed in Washington.