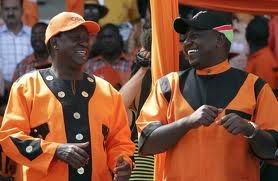 As I write this article, I have deep respect for history and politics as both have proved that â€˜nothing is too hard to doâ€™ for mankind, especially, on matters of disagreements and agreements at good and odd times. In the cloud of our history, negativity has embraced positivity in bringing out comparisons of results we want to have or not. That history becomes the beauty of past and future. Whatever we consider; whatever we opt for â€“ beauty is the ultimate goal. Peace, prosperity and stability together make our dream. In this result are we united in fundamental happiness; not that it is the satisfaction but that it is the fulfillment!

The leader of United Republican Party, William S. Ruto and his Orange Democratic Movement counterpart, Raila A. Odinga can thus agree to disagree but not fundamentally as I shall try to show here on. The duo has a shared dream which harmonizes every other disparity and bridges the dell maliciously dug in between them over the time.

Historically, both the leaders respectively belong to kin communities, Kalenjin (formerly Nandi) and Luo who, together, migrated into Kenya from South Sudan 2000 years ago. They are quiet, resolute and cohesive neighbours merely occupied by herding and fishing activities. No slight diversity has ever alienated them in history as they have competitively collaborated. They have the land at heart.

Birds of the same feather

Both the leaders joined active politics of parties in 1992. While Ruto joined Kanu as a youth leader, Raila joined Ford Kenya as Member of Parliament for Langâ€™ata. The two parties worked in cooperation under cordial and able patronages of their respective leaders, Daniel arap Moi and Mzee Oginga Odinga till the sad demise of Odinga in January1994. After unsuccessful contest for the partyâ€™s leadership, Raila founded National Development Party that he led into further cooperation with Kanu. The two parties merged to form New Kanu and Raila became the partyâ€™s Secretary General.

The two leaders joined Cabinet for the first time when Raila was appointed the Minister for Energy in June 2001 and Ruto, the Minister for Home Affairs in August 2002. When Raila joined a team of leaders to defect from Kanu in protest against Uhuru M. Kenyattaâ€™s endorsement by former President Moi, Ruto replaced him as the Secretary General.

No slight diversity has ever alienated them in history as they have competitively collaborated.Â They have the land at heart.

As Ruto endeavored for Uhuru, Raila campaigned for Mwai Kibaki. The latterâ€™s team won with a landslide and formed the government under National Rainbow Alliance of Kenya precisely ending the reign of Kanu. That was not the end of the story for the former New Kanu Secretaries General. Similarities had formed bonds in them and it was just a matter of time before they would sit together at a family table and agree to walk and work together. This was more necessitated by fresh uprising orchestrated by Kibakiâ€™s henchmen who literally belonged to his backyard. A host of minions who once baptized Raila as â€œnjambaâ€ followed foot-soldiers with names like Mwangi Kiunjuri, Peter Munya, Amos Kimunya, etc, to throw Railaâ€™s sacrifice to the dogs. This attracted genuine sympathies of friends within and without the government. The notable team was led by Ruto from Kanu.

In 2005, referendum campaigns against a Constitution proposed by Kibaki dubbed: The Wako Constitution, provided the first such tables at which they would assemble with other Kenyans. It was known as Orange. Whatever they declared were endorsed by Kenyans when they massively defeated the document. This earned Raila a Kibaki wrath reminiscent of Odinga â€“ Kenyatta ordeal of mid-sixties.

It was not by mistake, therefore, that Ruto and Raila, jointly with other leaders, left their parties to form the ODM in the year 2006. They were a strong force; so strong that the incumbent President Kibaki had to force results in the 2007 elections. Strong hands of division could not let them stay together.

Why Ruto cannot work with Uhuru

Coupled with deceit and conceit playing both from within and without, Uhuruâ€™s think tank has tried to make Ruto to believe that Raila has no regards for him. This began in earnest in 2008. Ruto tried to urge Raila to take nothing less than control of the government. When the latter signed a National Accord brokered by Committee of Eminent Persons headed by H.E. Kofi Annan [that made him Supervisor and Coordinator of government], Uhuruâ€™s team swiftly moved into action to convince their prey that Raila had betrayed him. That was the time the storm began to twirl, whirl, curl and hurl the ODM team. The party that entered the parliament as the giant gradually began to become the miniature. Both Ruto and Raila watched as the leopard lost its claws; and as one virtually regretted it, the other boorishly enjoyed it. It all occurred as their competitor rushed in to cook and serve Ruto into the hot pot of court cases. The schemes were designed to deny him space for an independent thinking. That is what they have worked to keep. They spice it with a price of currency and promises yet it is shrouded in pretense and self defense.

Three questions that Uhuru cannot provide to Rutoâ€™s ambition are: When Ruto joins him in forming the next government, how many minutes will it last before the like of Mwangi Kiunjuri, Peter Munya, Amos Kimunya, etc, throw a cordon against him thereby declaring the government â€˜Wanyumbaâ€™, a coded word for â€˜our ownâ€™ leaving him for destitute throughout the term? At the end of the term(s), will Uhuru be able to hand over any reliable votes to him in support? And finally, will he ever be able to restructure himself after the mess?

It is noteworthy that apart from the following which Ruto has gathered in the nation, his Kalenjin people are thirsty for a concrete course that should restore their national appeal after their son, Moi, retired from leadership ten years ago. This is a need that calls for an enduring scheme. With the history of politics where Uhuruâ€™s people are better off â€œvoting for a native dog other than an outsiderâ€™, it is doubtful that they will learn an opposite faith within a short period of time. That is why today Uhuru cannot stand down for another aspirant outside the House of Amumbi; if he does, another takes charge of the people.

Ruto and Raila are sure to share their packages if they agree to do it. They are both trusted by their supporters as open leaders and whatever they say in public has proved to denote their faith. This makes them appeal to their followers in a manner that remains popular with the masses as their deals are overboard. Ruto can be sure to use his diligence and influence in freely serving the nation in company of those who truly value him. In the same prayer he can be sure to, hopefully, deliver his sustained heartfelt dream from that reliable hand. It is all at their disposal. They can take and exploit it. Generations will live to cherish it because it is the kind of thing that the nation misses today. If it fails it is regrettable.

The Ruto – Raila dream to give the nation leadership based on shared opportunities, transparency and accountability is a lamp on lamp stand. Its realization is a reward to the nation as Kenya seeks to build its foundation on the New Constitution. With other leaders who wish the nation well, their government is sure to bring joy onto the faces of majority Kenyans. We look forward to it.