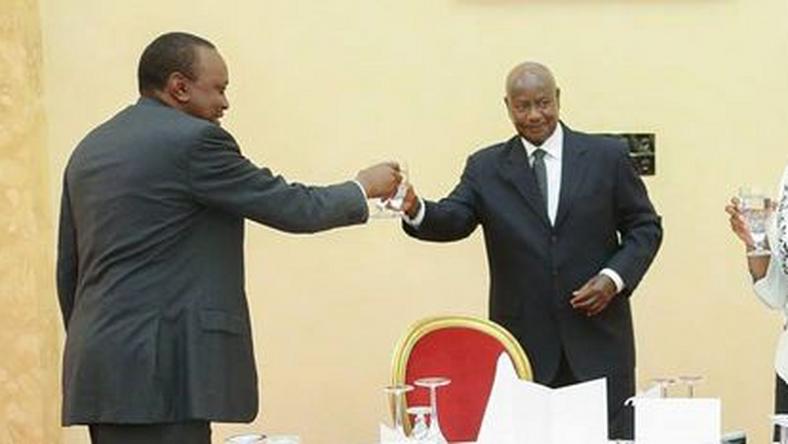 President Uhuru Kenyatta said that Kenya will avail land for Uganda in Naivasha to build a dry port.

The Head of State was speaking in Mombasa county where he had hosted Uganda’s President Yoweri Museveni on Wednesday.

He stated that movement of cargo from the Port of Mombasa to Kampala that previously took 21 days has drastically reduced to 7 days.

President Kenyatta further said that by August this year, the SGR will have reached Naivasha.

“I have confirmed to President Museveni that with that development in Naivasha and then moving the SGR to Malaba, goods will be able to move from Mombasa to Malaba in just two days,” President Kenyatta said.

He further said that as the Kenyan government was implementing the long-term plan to move all cargo from the road to the SGR.

According to President Kenyatta, his administration was working on the complete elimination of barriers that slow down movement of cargo such as multiple roadblocks and unnecessary weighbridges.

“…more importantly, it (SGR) will reduce the cost of transport for Ugandan investors and Uganda itself. It will improve efficiency of Mombasa Port to the benefit of our people,” said President Kenyatta.

On the transportation of petroleum products, President Kenyatta said his government was finalizing the construction of the Kisumu petroleum jetty.

“For the first time since colonial days, we are utilizing Lake Victoria for transportation thereby reducing the cost of moving fuel (petroleum) to Uganda and increasing the potential for trade between the two countries,” he stated.